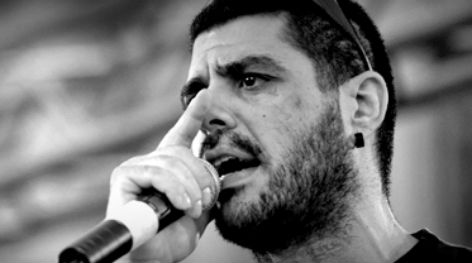 Standing up against fascism and injustice until the end

Can someone die a “beautiful death”? Nobody can answer that question. But what is certain is that Pavlos Fyssas died in “public view.” He was murdered by cowards — who killed him because he lived his life standing up. But while Pavlos lived and died standing up — his killers lived and live their cowardly lives not standing, but on their knees, bowed and obedient to their bosses.

Pavlos was a working class kid, who grew up in Keratsini, a working class suburb. He was the son of a metal worker in the shipbuilding area of Perama, an industrial zone. Pavlos followed in his father’s footsteps to find work in the industrial zone (his father, known as ‘mastro-Taki’, is 62 years old and he still struggles to get enough work credits to retire.) Until the onset of the economic crisis and mass unemployment, Pavlos worked a steady job as a pipefitter’s assistant from 1998 to 2008.

After the crisis hit, Pavlos dedicated more time to his music, but continued working occasional day shifts in the industrial zone. As a member of the metal workers’ union in Pireas (along with his father) he regularly participated in protests and strikes.

Pavlos fell in love with hip hop when he was a high school student and quickly evolved into an artist. In his lyrics, Pavlos wanted to express everything that angered and frustrated him. His first endeavors were associated with the “low bap” movement. From 1997 to 2001, he participated in the group ‘Kaka Mandata’ (‘Bad News’). He later started working on his own under the name ‘Killah P’ or ‘Killah Past’ which reflected his view that we must not repeat the mistakes of the past and that we must change. Pavlos participated in various projects and collaborated with major artists in the hip hop scene.

Pavlos believed that art should not be a commodity. He distributed his music for free through the internet, and was never interested in promotion, public relations and recording companies. He preferred to express himself freely and independently rather than enter that trap. He preferred to live the life and the troubles the young people of the working class had to deal with. Totem (his friend and collaborator in Kaka Mandata) said Pavlos could not rap for their second demo track because he was so exhausted from his work that he fell asleep in the studio.

Pavlos decided to make his own way. He knew perfectly well what hip hop means to managers and the big music media. Pavlos spoke of the real problems of society — while they wanted him to write lyrics about fancy cars and macho-bullshit, peppered of course with usual sexist clichés. As he said in an interview:

One does not always find ‘answers’ in his lyrics. But the right questions are constantly there: social injustice, state repression and fascism. The murders of Alexis Grigoropoulos and Carlo Giuliani, the corruption of the bourgeois politicians, the lies of the mass media, the dumbing-down caused by TV trash, the empty consumerism and cynicism that are promoted as models — all these issues pervaded Pavlos’ lyrics and he aimed to awaken consciousness.

His opposition to fascism was known not only to friends, but also to enemies. “He was targeted by us because he wrote anti-fascist songs,” according to a former member of the neo-Nazi ‘Golden Dawn’ local chapter in Nikaia, in an interview to the newspaper, ‘Ethnos’. [1]

… Who meant what he wrote

Of course, many artists talk through their songs about social injustice. But as we all know, very few combine words with deeds. Pavlos belonged to this rare category.

A letter to the media by his friend Christos Panoelias [2] recounts events in early February 2012, when freezing temperatures were endangering the lives of the homeless. Pavlos initiated a call to hip-hop artists to scour the worst areas in the city and inform the homeless where they can safely spend the night and help them get to shelters. During the activity, members of local police units (DIAS) who were patrolling the areas, stopped the activists with hostile intentions, asking who they are and why they are doing what they are doing. It makes one wonder if some of the same cops were in the team that “discreetly” watched Pavlos’ murdered a year and half later? We will never know…

“He was the type of person who if he saw a woman being harassed in the street, he would rush to help,” Totem says. His friends and colleagues always knew that if they had a problem, he would do all he could to support them.

Pavlos had decency and honor. His killers, in contrast, only understand spilling blood.

Pavlos Fyssas faced death the same way he faced life: with courage. Even at the time of the attack, his first concern was to protect the weakest among his friends, including one woman and those slightly built. He stood against the mob that was facing him. He looked at the thugs in the eyes and he dared them, if they had the guts, to come at him, one at a time. We all know they do not have real guts.

The sad talking heads on TV will try to convince us that the murder of Pavlos was a clash of the “extremes.” But, in reality, it was a collision of two different worlds. On one side, working-class altruism, courage and militancy, as expressed by Pavlos Fyssas. On the other side, the decay, cowardice and backwardness as expressed by the neo-Nazis and ultimately the system that breeds them.

The clash, though, between these two worlds did not end on that night – and it will not end until the working class is victorious. This will be neither easy nor will it be achieved “in a single day.”

Yet Pavlos’ example will give us courage in all those moments when we feel “small” and “weak” in front of the system and its attack-dogs.

Pavlos’ name and face will remain in our slogans, our banners, and our songs. This will give us the fortitude and confidence to do away with the rotten system of capitalism.

We will become “killers of the past.” This will be the best tribute for Pavlos.

[With thanks to Alan A. for translating the above article]