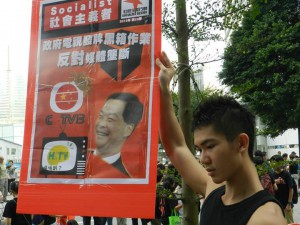 A huge crowd turned out in Hong Kong on Sunday to vent their anger over the government’s decision to favour two big business groups with so-called free­-to-­air TV licenses. Organisers put the protest turnout at 120,000. The protest was initially started as a protest page on facebook, less than a week ago. Reviving memories of last year’s ‘Occupy Tamar’ protests against the introduction of ‘national education’, rejected as brainwashing by most people, yesterday’s crowd surrounded the government headquarters at Tamar. Media employees and supporters camped overnight in the demonstration area and a follow up protest is called for Monday evening.

The deeply unpopular Beijing-appointed government of CY Leung stands accused of deciding its broadcasting licenses inside a “black box”, a process lacking any transparency or accountability. Its decision to issue licenses to two TV stations controlled by big media conglomerates – iCable’s Fantastic Television and PCCW’s Hong Kong Television Entertainment – is seen as pandering to the monopoly interests of business groups close to the government. HKTV, whose application was rejected, is a recent start-up by another businessman, Ricky Wong Wai-kay, who is seen as more independent of the government. 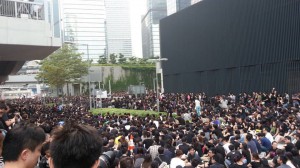 The government refuses to explain its decision, reportedly made by Chief Executive CY Leung himself, or why a limit of two licenses was set. For the mass of protesters this raises important issues over freedom of information and the worrying slide towards more self-censorship by Hong Kong’s allegedly ‘free press’, which is linked to the corporate stranglehold over the city’s news media.

The issue of press freedom, and democratic rights as a whole, is potentially explosive in Hong Kong, which has experienced more then three decades of empty promises to allow democratic elections, first from the British colonial regime and since 1997 from China’s one-party state. CY Leung is widely seen as a puppet of Beijing, under whose rule even past civil freedoms and limited democratic rights are being eroded. The city’s media while not openly policed as in mainland China, is far from free in reality. The big capitalists are vocal opponents of democratic elections, with arguments that this is “divisive”. “bad for the economy”, and will lead to “welfarism”. Of course these views are prevalent in the tycoon-owned news media.

Most of Hong Kong’s media tycoons have major business interests in China and honorary positions in the dictatorship’s governmental appendages such as the rubber stamp National People’s Congress (NPC) and its twin body, the Chinese People’s Political Consultative Conference (CPPCC). This applies to the two successful bidders for free­to­air TV licenses: iCable is part of Wharf Holdings, a property and media conglomerate whose boss Peter Woo Kwong-ching is a ‘delegate’ to the CPPCC, as is Victor Li, son of Asia’s richest billionaire Li Ka-shing, who heads telecom giant PCCW.

That so many people responded to yesterday’s call to protest highlights the high level of democratic consciousness. Hong Kong saw over 7,000 street protests last year and complaints are often heard from the pro-Beijing capitalist establishment that the city has been “politicised”. While the issue of press freedom and media monolopies is an extremely important one, it’s also clear that this monster demonstration reflects much deeper anti-government feeling, as shown by placards on the march that read “Down with CY”.

It is also significant that Sunday’s march was initiated outside the traditional channels of the ‘pan democratic’ opposition parties. The leaders of these pro-capitalist parties have clearly sought to avoid inciting mass protests against CY’s government in recent months, hoping to contain and dampen down popular expectations as the deadine looms for new electoral rules for 2017. This is when, based on vague promises, Beijing is supposed to allow genuine elections for the head of Hong Kong’s government. In reality, as representatives of the dictatorship have made clear in recent press interviews, this will not happen. The election rules, as yet unannounced, will include key undemocratic features that allow Beijing to manipulate the result. Only mass struggle aimed at bringing down the unelected CY government and forcing Beijing to retreat, can bring real change.

Given that they are not prepared to launch such a struggle, fearing it could go far beyond their limited aims, the leaders of the pan democratic parties are under intense pressure. Beijing shows no signs of real concessions and mass patience is running out. After so many false dawns the pan democratic tops fear for their own position as ‘leaders’ of the democracy struggle. There is a proposal that initially generated widespread enthusiasm, to ‘Occupy Central’ (the city’s main business district) next summer. But even expectations and plans for this are now being downsized by pan democratic leaders. Against this background, the sight of tens of thousands on the streets yesterday shows the real mood to confront and challenge CY’s government and its political masters. 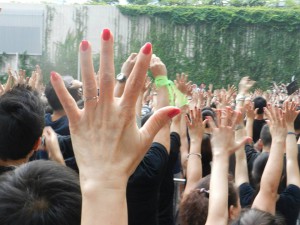 The supporters of Socialist Action (CWI) intervened actively in Sunday’s demonstration, and with regular street activity in the preceding days. We published a special issue of ‘Socialist’ magazine of which over 240 copies were sold on the demo. Socialists oppose censorship, whether by the state or by the tycoon-owned media monopolies. We call for the mass media to become accessible to all, to allow the whole of society to use this as a means of communication, artistic and cultural expression, requiring great openness and tolerance of different ideas. This can only be possible through democratically controlled state funding to support autonomous publications and media organisations, which reflect a diversity of opinions. Such genuine press and broadcasting freedom is impossible with the news media controlled by government or by undemocratic business cartels.

How to win this struggle?

For the next stages of this struggle, Socialist Action has raised the proposal for a one-day strike by media workers in Hong Kong, with journalism students possibly leading the way by initiating strikes or walkouts in the colleges. Even with massive mobilisations on the streets, CY’s government will not retreat lightly, which involves a serious loss of face, and may therefore calculate on the “storm passing” as has happened many times before. Strikes as a decisive method of struggle – demonstrating the awesome collective power of workers – have not yet featured in Hong Kong’s long democracy struggle, and this is a major reason the struggle has not yet succeeded.

While protest marches play a vital role in mobilizing the masses, it has been shown that marches alone cannot win – more advanced methods of struggle are needed, drawing on the experience of the workers’ movement. The same is true of ‘Occupy’ demonstrations that continue for days or weeks, such as last year’s protests against national education. These can provide a powerful springboard for further action, but if they are limited only to occupations they invariably run out of steam (a key lesson of last year’s struggle). The need for democratic and fully inclusive campaign networks, not closed ‘leaderships’ that impose themselves on such movements is also a vital lesson of recent struggles.

Socialists also stress the need for workers, not least the employees of HKTV (of whom 320 were dismissed when the company’s license bid failed) to act independently of the bosses, by building strong and democratic unions and putting forward their own demands. One person was conspicuously absent at yesterday’s demo: HKTV chairman Ricky Wong Wai-­kay. 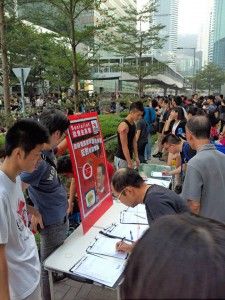