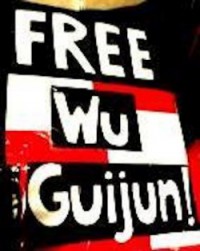 Support grows in campaign for release of imprisoned workers’ representative

It is now five months since Wu Guijun, a migrant worker employed at the Diweixin Product Factory in Shenzhen, was taken into detention by police. Wu had been elected by his workmates during a month-long strike against derisory severance pay in connection with the plant’s closure and relocation. Yesterday, 23 October, supporters took their protests to China’s embassies and consulates in 13 cities around the world as part of an international protest day initiated by chinaworker.info and the Chinese supporters of the Committee for a Workers’ International (CWI). Other organisations have responded to the Diweixin workers’ call for help, by staging protests and circulating online petitions. These include the Hong Kong Confederation of Trade Unions (HKCTU) and the International Union of Foodworkers (IUF). ‘Arbetet’, the weekly newspaper of the Swedish trade union federation LO, reported on the 23 October protest day.

First out on 23 October were a group of young activists in Sydney, Australia, who went to the Chinese consulate holding placards in English and Chinese demanding Wu’s release. A protest action in Hong Kong co-hosted by Socialist Action (CWI) and the League of Social Democrats, attended by LSD chairman and legislator Leung Kwok-hung, marched to the Central Government Liaison Office to deliver a letter in support of Wu and the Diweixin workers. The protest was reported in Apple Daily.

In Dublin, letters were delivered from Joe Higgins, Socialist Party Member of Parliament and his CWI colleague Paul Murphy, who sits in the European Parliament, during a protest at the Chinese Embassy. Similar actions took place on the same day in Bangalore, Berlin, Colombo, Gothenburg, Kuala Lumpur, Sao Paolo, Stockholm, Taipei and Warsaw. In the West African nation of Ivory Coast, a group of socialists presented a protest letter to China’s Embassy demanding Wu’s release.