Need for united mass struggle against the system that breeds discrimination

While equal rights activists are achieving significant steps forward around the world, the struggle for same sex marriage continues in Taiwan and throughout the Asia-Pacific.

The past few months have been a tumultuous period for LGBT rights in the region. New Zealand became the first Asia-Pacific country to legalise same sex marriage. A state in Australia also legalised same sex marriage, only to have the conservative government intervene to reverse the change.

In Taiwan, the DPP has introduced a bill to the legislature which would involve changing the wording of the marriage section of the Civil Code. References to ‘husband and wife’ and ‘father and mother’ would be changed to ‘spouse’ and ‘parents.’ Significantly, the bill also includes changes to discriminatory adoption and inheritance laws, which in theory would prevent courts from basing custody rulings on gender identity or sexuality.

The KMT have blocked two similar bills since 2000, but are clearly now feeling the pressure from mass support for LGBT rights. The 60,000-strong Taipei Pride march in October means they are desperate not to let the DPP upstage them. Mass social pressure like these big rallies forces politicians to take a position.

The KMT, however, is still fundamentally against the change. One KMT legislator, Ting Shou-Chung (丁守中), argued that ‘the family of a man and a woman is an important force for social stability, and should not be altered.’

Ting’s argument cuts to the heart of the ruling class’ anxiety. The nuclear family is a cornerstone of capitalist society. The ruling class in Taiwan and throughout the region is worried that changes to the nuclear family will throw the questions of unpaid domestic labour and of responsibility for housing and childcare into the spotlight.

This is not a phenomenon limited to Taiwan. All around the world capitalist governments fear what changes to traditional family structures could mean for their neoliberal agenda. In Russia, for example, the government is cutting public housing and has started claiming that it is the Russian tradition for entire families to live under one roof. Cynical examples like this show that for capitalist governments everywhere, ‘tradition’ is a very flexible concept. It is not surprising that the Russian government has also aroused worldwide disgust with its homophobic policies.

Sickeningly, KMT legislators took part in a large homophobic rally against the bill in November. LGBT activists were chased, pushed and held down and prayed at by religious thugs. These horrific scenes show the depths to which the government is willing to stoop to prevent any challenge to its austerity agenda. In their vision of society, ordinary people rather than big business bear the cost of the economic system’s failures.

Politicians will only agree reforms if forced by mass movements of people. To this end, the focus of the campaign for same sex marriage needs to be on building a movement in our communities, in our workplaces, schools, on university campuses and on the streets. As well as struggling for equal marriage rights we also need to recognise that this is only one aspect of the struggle for LGBTIQ rights.

Many of the young people who have participated in the movement for same sex marriage do not in fact want to get married. They see the issue as one of discrimination – just like the other types of institutionalised discrimination that they face everyday.

LGBTIQ people are doubly oppressed in the sense that they are exploited in the workplace and suffer from all of the other issues that working people face. At the same time they are oppressed because their sexual orientation, identity or gender is seen as unacceptable by the capitalist system.

As well as not having the right to marry, LGBTIQ people lack adoption rights, are often subject to extreme bullying and employment discrimination. Often issues like cuts to health services impact on LGBTIQ people disproportionately.

The lack of affordable housing is also something that disproportionately affects LGBTIQ people. Queer youth are often forced out of their homes or out of school because of bullying and discrimination.

So with the dangers facing the LGBTIQ community seemingly endless, how should we fight against these problems and direct this struggle?

Broadening the demands of the campaign to include issues like health and housing, bullying and discrimination would help to draw more people into the movement – especially those not interested in marriage. But side by side with fighting against discrimination and for equal rights we need to recognise that it is the system itself that creates these conditions.

Capitalism is a system that prioritises profits before all else. The majority of people have very little say over how society is run. It is a system that thrives off inequality and exploitation the world over. Those who own and control the wealth use every trick in the book to divide and rule ordinary people to ensure that they do not fight together for a bigger share of the pie.

Only by having real democratic control of our day-to-day lives, and by sharing out society’s wealth, could the basis for divisions be undermined and a truly equal society be built.

With this in mind the struggle for LGBTIQ rights in general needs to be a struggle that is linked to the fight for a different type of world – a socialist world.

The Committee for a Workers’ international – which organises in Taiwan and many other countries – is at the forefront of the struggle for LGBT equality globally. In the US our section linked the question of poverty wages and homophobia through the Kshama Sawant election campaign (see article in this issue of Socialist); in Russia our comrades are fighting Putin’s homophobic laws, and in many other countries and regions our comrades are fighting on different fronts for socialism and equality.

The fight for same sex marriage is winnable. Appealing to capitalist parties to merely change the laws however will not be enough. The mobilisation of ordinary people will force through reforms but only the transformation of society along socialist lines will lock in these reforms once and for all. 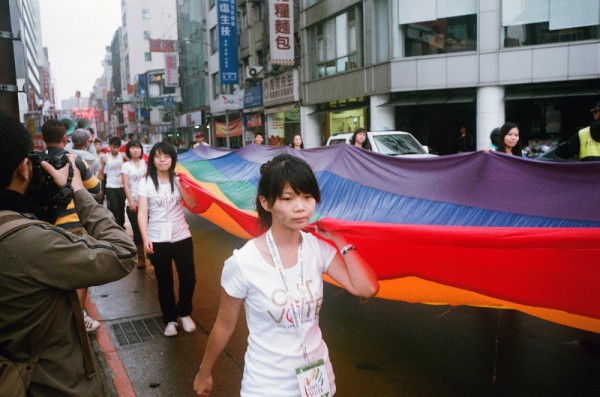 Britain: Capitalist crisis – End of the line for Boris Johnson