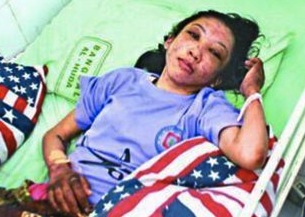 HONG KONG: The case of tortured Indonesian domestic worker, Erwiana Sulitiyaningsih, exposed the extreme harsh life of migrants in Hong Kong. Not only facing violence, Erwiana was not paid or given any days off during her eight months employment. This case is only the tip of the iceberg. After the example of Erwiana, more workers dare to speak out publicly on how their employers abuse them. The modern slave system in Hong Kong has become an international scandal.

The hiring agencies are a brutal example of capitalist exploitation. These agencies force domestic migrant workers to pay a lot of money to ‘introduce’ a job for them. The agency only cares about their profit but has no regard for the working conditions of the workers. The 2-week rule is extremely unfair to migrant workers, pressuring them to stay with a bad employer rather than risk to be kicked out of Hong Kong! The law that workers must live with their employer robs them of any independent life – a basic human right that does not apply to migrants in Hong Kong. Not only do they lose their own privacy, some workers are forced to work at night. Socialist Action calls for scrapping the 2-week rule and for the right of workers to live independently. We demand a big expansion of public housing including provision of cheap independent accommodation for migrant workers who are currently excluded from public housing.

Migrants face systemic discrimination and racism from the authorities, long work hours, low wages and poor protection. The government has deliberately erected walls to segregate migrant workers from the rest of the working class so that they can be more easily exploited in the interests of big business, which opposes more funding for social services like childcare, elderly care, and reduced working hours to allow workers to spend more time with their families. Only by organising and building strong unions can this segregation be broken down. The billionaire elite fears the struggles of migrants for a fair deal could merge with Hong Kong’s struggle for democratic rights, workers’ rights, and for more spending on basic welfare provision. But in more and more countries workers are fighting back as we have seen recently in Cambodia and Indonesia with new fighting unions and big strike movements for a living wage.

Socialist Action fights for full democratic rights and legal protection for migrants and for all workers – the right to join a union, for collective bargaining, to strike, and the same right of abode as for others. The only way to get rid of the law-breaking private recruitment agencies is for them to be replaced by a public non-profit and cost-free authority to manage migrant hiring, under democratic control. This is to recognise that under the present set-up of starved social services in Hong Kong, foreign domestic workers provide vital social services with a big economic impact.

The Erwiana case is a wake-up call – showing the need for united struggle for women’s rights, against racism, and for equal protection for all workers. The racism whipped up by the media and politicians (right of abode issue, Manila bus tragedy) aims to divide and weaken the struggle for workers’ rights and democratic rights. The racists’ “caring-Hong Kong” propaganda threatens all working people, not just migrants and minorities. Socialist Action believes it is crucial to build a mass anti-racist movement in Hong Kong. Together with other groups we will also be out marching on International Women’s Day on 8 March, to show the need for continual struggle for women’s equality and against the capitalists’ attempts to divide and weaken us.