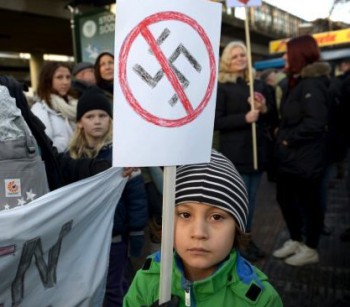 The demonstration in Kärrtorp, south Stockholm, on Sunday 22 December was the largest anti-racist demonstration ever in Sweden. 20,000 gathered at the sports ground in response to a recent attack from armed Nazis.

During November, a violent Nazi organisation (Swedish Resistance Movement, SMR) increased their activity in the area. Swastikas were painted everywhere, several immigrants were assaulted and the group was observed training at the sports ground.

The local branch of Rättvisepartiet Socialisterna (RS – CWI in Sweden) discussed the need for an anti-fascist campaign, involving as many local people and youth as possible. Others also wanted a campaign, and a network was launched. A demonstration was called on 15 December.

800 people turned up, a massive local reply to the Nazis. In the midst of this peaceful gathering, the Nazis attacked. 40 of them, running in military style throwing bottles, powerful firecrackers, wodden sticks and rocks into the demo that included parents with prams.

After a minute of chaos, stewards and demonstrators fomred human chains to defend the demonstration. After another minute, the demonstrators began to move forward towards the Nazis who had to backtrack. The Nazis got bruises as they were pushed along streets in the neighborhood and finally ran into the forrest.

It was a spectacular victory. The police came under heavy criticism for neglecting to defend people and later for protecting the Nazis from the anger of the demonstrators. A mom who just saved her children from the Nazis asked one of the police officers why they had not arrested the Nazis. “You’re not much better you,” the police replied.

The police and some media initially tried to portray this as a riot and fighting between two groups. It took some days of pressure and criticism until the police admitted they had information about an attack and that all 26 of those arrested were Nazis.

The network got attention for filing a complaint against the police for its protection of the Nazi criminals. “Instead of arresting those guilty of flagrant violations the police defended them, said the network spokesperson Ammar Khorshed to media. He is a member of the local RS branch and was interviewed in national television and newspaper every day the following week.

22 December was chosen for a new anti-fascist demonstration. The response was immediately very strong. 15,000 indicated attendance via Facebook. Local activities showed everyone knew about the demo. An local branch of Students aganist Racism was formed.

A wave of antiracism and antifascism rolled over the country. In around 25 cities and towns, demonstrations were organised. 3,000 demonstrated i Gothenburg, 2,000 i Umeå, 1,000 in Malmö and so on.

The Kärrtorp demonstration became the biggest demonstration against racism and fascism ever in Sweden. Suddenly, all parties in parliament, with the exception of the racist Sweden Democrats, said they would attend. That included party leaders of Social Democracy, the Left Party and the parliament’s Speaker.

The network, however, withstood the pressure and avoided putting these political “celebrities” on the speakers’ list. Local activists, people who had actually done the campaign work on the ground, were chosen as speakers. A number of artists, all of them well-known for their stand against racism and critique of the system voluntered and were booked.

On 22 December, protesters arrived in their thousands by underground and buses, with as many local people arriving by foot. The massive turnout highlighted the strong support for anti-racism and anger against the Nazi attack. At the same time, many of those attending also praised that this was a rank-and-file campaign.

On the square outside the underground station thousands tlistened to the drums played by Riot Samba, Sambomban and Yakumbe. Then came a mighty march to the sports ground. There, they were greeted by Enzo Costa from Students Against Racism and Zandra from Line 17.

“We are now on the football field where people first discovered Nazi activities in the area. They trained military marches and Hitler salutes here on this football field. Now we are taking it back . And we’ll take it back for ever and we crush Nazism”, said Enzo Costa to great applause .

The first speaker was Peter Myllykoski , a member of Rättvisepartiet Socialisterna and in charge of the stewards for the demonstration.

“The Nazis attacked us – an armed and planned attack. It was we – all demonstrators that collectively together drove out the Nazis. It was a big victory – right?” said Petri Myllkoski and received applause and a resounding Yes to answer.

He also addressed the criticism of police actions last Sunday :

“You probably know that we filed a complaint against the police to the police. They underestimated the threat, failed to act on information and ultimately even protected the Nazis. Now, we want answers from police and courts: Will the Nazis be punished? That 23 of the 26 were released is not a good sign. Nor that they are charged with rioting when it was attempted murder”, said Petri Myllykoski and got new applause.

The next speaker was Lena Ezelius, leader of the local branch of Kommunal (council workers’ union):

There were several other speakers, including for the local network Linje 17 and from Students against racism. Bianca and Tiffany appeared with the song “PK Girl ” as the first of many artists .

“Kärrtorp have learned that anti-racism comes from below, from the common people. Many people have seen the need for organising, locally and across the country against Nazism and racism. To stop racism and Nazism we need a common struggle against all injustice and against all attempts to split us.

Many participants were interested in knowing more about Rättvisepartiet Socialisterna, understanding our local party branch launched the campaign against the Nazis in Kärrtorp a month ago and forms a crucial part of the network which organized today’s demonstration On the other hand, one right-wing journalist wrote she left the demo “more scared and sad” because of the left-wing mood there.

The demonstrations around the country show the possiblity of launching a new anti-rascist movement, organising against the Sweden Democrats and the Nazis as well as campaigning against the neo-liberal policies that gives racism fertile ground.