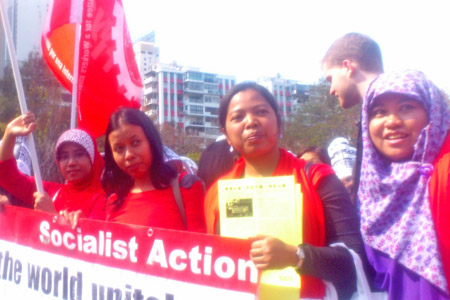 “I have two kids and two parents to feed. I must send money home to them; if I don’t feed them, who will? I must carry on.” Nisa, in Hong Kong since 2008, explained why hundreds of thousands of Indonesian women come to Hong Kong, Singapore and other cities to work as domestic workers. Nisa’s first job was not a good experience. She suffered verbal and sometimes physical abuse from her employer. The reason she decided to endure this nightmare and finish her two-year contract is because of the excessive agency fees. “I had to finish my contract even if I’m abused by my boss. If I change job, the agency will charge me again, a new fee, which takes up another seven months of my salary.” 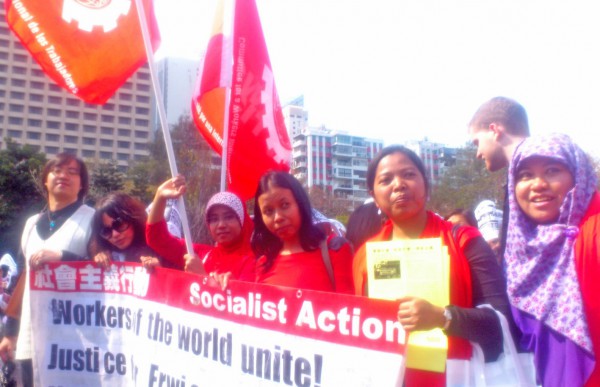 I interviewed four Indonesian women who have worked from between five and 12 years in Hong Kong. They are Nisa, Eny, Lanny and Lia. They told me about hard lives they have led trying to make some money to support their families in Indonesia. All four are now active in the Justice for Erwiana movement which has hit Hong Kong’s streets several times to demand an end to the worst abuses of the present migrant employment system, like the blood-sucking agencies.

Lanny has worked eight years in Hong Kong. She is particularly angry with how the Indonesian government responded to Erwiana’s case. “The government wants us to shut up, they said they will pay money to Erwiana and her family, and they want her and the migrant workers to keep quiet. They don’t care about our life at all!”

The plight of migrant domestic workers has been described as “modern-day slavery” by Amnesty International. They have almost no free time or privacy, and long working hours which can be dictated by the employer, whose home they stay in. The agency system acts like a prison, giving domestic workers very few rights to change their jobs.

“Did my homework in the toilet…”

Lia has worked seven years in Hong Kong, and like many other domestic workers she sends her salary home every month. She also pays to study on a computer course in Hong Kong. During her first contract, the old woman in the household didn’t allow her to sleep in a bed even though the family had an extra bed. “One night, she woke me and pulled me out of bed, and made me sleep on the living room sofa.” The only time Lia could do her school homework was after midnight when her work was finished, but she was not allowed to turn on the light in the living room. “So I did my homework in the toilet. It was the only place where they didn’t know what I was doing”.

Nisa’s first boss constantly called her abusive names such as “idiot” and “stupid”. This went on everyday for 2 years, and even the boss’ children learnt from their mother and started calling her “idiot”.

Starting work at 6am is common for these women, and many of them don’t finish work until midnight. Because of the live-in rule they are basically forced to work whenever the boss wants them. Nisa recounted about her first job contract. “It was 3am in the morning, I was sleeping in the living room, my boss woke me and she was very angry because she found a mark on one of her daughter’s dresses that I washed. She made me get up and wash it again… at 3am!” Luckily, Nisa’s current employer is much more reasonable.

She agrees that the live-in rule should be scrapped, to allow domestic workers to choose whether to live with their employer or live out. “Some of my friends work 18 hours a day, and this is because of the live-in rule.”

Eny’s first job was in Yuen Long. At first her employer requested her to work for another house 30 minutes away from the boss’s house. It actually means working for two employers, which is illegal – the boss can be fined. Eny needed to work everyday from 6am to 2am the following morning. That’s a 20-hour working day and less than four hours sleep!

Her employer owned a barbeque business, so Eny was also asked to work as a cook in the business. This is also illegal, as it is not domestic work! She couldn’t stand the extreme long working hours and conditions, so she decided to quit the contract after six months. But as a result she was forced to pay the agency charges over again, meaning she lost all her salary. She worked for two years and earned nothing – what is that, if not slavery?

All domestic workers from Indonesia have to go through an agency otherwise their contracts are not recognised. This is a deliberate government policy, to enrich some 1200 companies that engage in ‘trafficking’ of migrant labour. By contrast Filipino migrants are relatively lucky in that their government does not make this a condition. For every migrant worker coming to Hong Kong from Indonesia the agencies charge HK$21,000 (US$2,700), which is normally seven months’ salary. Some agencies have been discovered charging even more than this.

Nisa said the agency system cheats migrants. “Everyone must go through an agency centre. I was forced to go on a ‘training course’ on how to be a domestic worker.” This was not really necessary, she said, and actually just another way for the agencies to justify the excessive fees they charge. Even after you finish the training course there’s no guarantee you can get a job.

The agencies are known for over-charging and failing to deal with problems and complaints. But migrants have no rights to change agencies once they’ve signed a contract. These parasitic companies are one of the reasons so many migrants don’t speak up when facing abuse by their employer. In the wake of the Erwiana scandal migrant workers are more and more ready to stand up and fight against these injustices. What’s needed now is to build a fighting movement based on trade union organisation and building links with other sections of the working class.