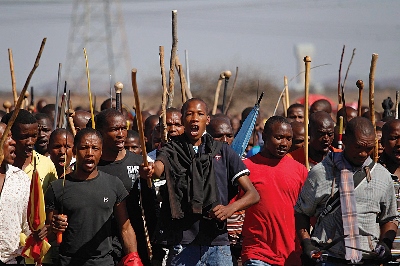 Campaigning for WASP socialist alternative at May polls

As South African President Jacob Zuma, last Friday, announced that the country’s next general elections will be held on May 7, this year, his regime was surrounded by dramatically intensifying class struggles. The same day, an AMCU (Association of Mineworkers and Construction Union – the union that replaced the ANC-aligned NUM in the platinum belt following the Marikana massacre in 2012) shop steward at Amplats’ Union Mine – was shot dead by police as workers were making their way to a mass meeting in the course of the strike for a R12 500 living wage which has shut down 40% of global platinum output for nearly three weeks. He became the latest on a long list of victims of extreme police brutality in the past few weeks alone.

The past three months have seen an average of 32 protests per day, according to the police minister. This compares to three per day over 2009-2011, which already amounted to the world’s highest ‘protest-per-capita’ rate in the world. In addition to the mining strike and other worker protests, poor townships and squatter camps are in flames over a range of immediate issues: unbearable electricity costs, government failure to provide clean water, sanitation, housing etc., but also corruption. Outside mining town Brits in the North West province, for example, residents took to the streets in January to protest against months of water shortages. After police responded by killing four protesters, the residents’ suspicion that the ANC in local government was tampering with water pumps in order to award contracts to private water tank suppliers, who then rewarded the politicians and officials handsomely, was confirmed. Student strikes have also flared up in recent weeks in protest against the mass exclusion of working class youth from higher education due to the lack of government financial aid.

The approaching elections are contributing further to the increasing politicisation and polarisation of society. The clarification of the class character of the ANC government and the state which the Marikana massacre in August 2012 provided, has worked its way through the minds of millions of working class people. While many protesting communities are taking up the ‘no-vote’ position to threaten and punish the ANC, millions are searching for their own political alternative. At the close of voter registration drives last weekend, 25.3 million people or 80.5% of eligible voters had registered. This is the highest level ever, according to the Independent Electoral Commission.

The framework of class collaboration, on which the ANC’s rule and bourgeois democracy has rested for the past 20 years, is beginning to crumble. Most notably, the ANC-aligned Congress of South African Trade Unions (Cosatu) is falling apart. The largest affiliate, metalworkers’ union NUMSA, has broken with the ANC and is moving in the direction of forming a political party. Eight other Cosatu affiliates are also rebelling against the increasingly isolated Cosatu President Dlamini, and even in the ‘ANC-loyalist’ affiliates cracks are widening rapidly.

What remains of the Cosatu leadership around Dlamini is digging in its heels. This week, a specially convened ‘Central Executive Committee’ meeting, which was boycotted by nine of the nineteen affiliates, decided not to hold the special congress which has been demanded by the nine to review the decision to suspend the popular Cosatu general secretary Vavi. The glove was also thrown to NUMSA with a letter warning it of suspension or expulsion over, amongst other things, its withdrawal of support for the ANC [A full report on this development will be published soon on socialistworld.net]

The polarisation is reflected in a reconfiguration of the political landscape. The Democratic Socialist Movement (CWI in South Africa) took the initiative together with mineworkers’ strike committees to form the Workers and Socialist Party (WASP) following the 2012 strike wave. DSM comrades are working hard to grow WASP and contest the May elections where WASP will be the only genuine socialist alternative. Expelled former ANC Youth League president Julius Malema’s new party, the Economic Freedom Fighters, has gained popularity rapidly and is viewed as a simple alternative by many desperate young and poor people. The EFF’s rejection of WASP’s proposal for an electoral alliance only to, recently, kiss-and-make-up with the arch-reactionary Inkatha Freedom Party, responsible for the deaths of tens of thousands of anti-apartheid activists, is, however, one of many warnings when it comes to Malema’s outfit.

Mining millionaire Mamphela Ramphele’s Agang-SA, formed last year as a ‘responsible-black’ pro-big business party, has, despite much media hype, not taken off. It was disgraced along with the self-proclaimed ‘official opposition’ the Democratic Alliance (DA) when a merger was proclaimed to great fanfare, with Ramphele announced as DA presidential candidate, only to be called off five (5) days later! The spectacular failure to gather a united right-wing opposition to the ANC underlines the need for the working class to rise to the challenge of taking SA out of the dead-end of capitalism.

The 2014 elections are an important opportunity to set an example of workers’ MPs in action behind enemy lines in a bourgeois parliament. About 63,000 votes will be required to get a seat in national parliament. All stops should be pulled to reach that target, not only by socialists in SA, but internationally, as well, because a WASP success in will be a step forward on the march towards socialist revolution, not only in SA but across the continent and the world.