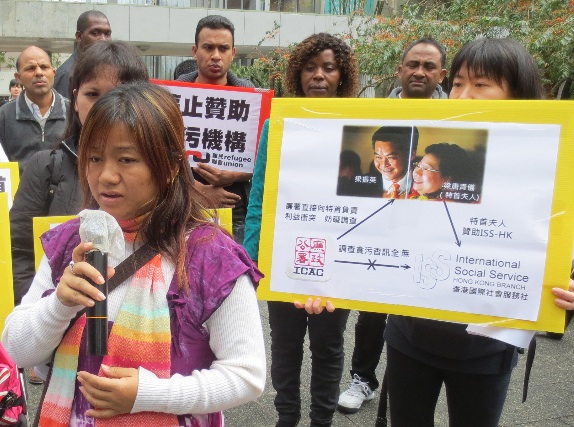 “Who took our money? ISS! Who sponsors corruption? CY’s wife!” This was one of the chants as over 60 refugees marched to Government House on Thursday 13 March in the latest protest in their continuing battle against corrupt welfare contractor International Social Services Hong Kong (ISS-HK). The protest was organised by the Refugee Union, supported by members of Socialist Action (CWI in Hong Kong) and ‘Longhair’ Leung Kwok-hung, chairman of the League of Social Democrats (LSD). It drew attention to the fact that Regina Leung Tong Ching-yee, wife of Hong Kong’s unelected ruler CY Leung, is a patron of ISS-HK.

“The ISS scandal goes to the very pinnacle of power in Hong Kong – the ruling family!” said Sally Tang Mei-ching of Socialist Action.

The position of the Chief Executive’s spouse is inconsistent with the notion of a fair and rigorous investigation of corruption at ISS. Despite its ‘NGO’ label, ISS in fact profits from a lucrative contract (HK$280m for the current year) with the Hong Kong government in order to operate a minimal welfare cushion for the city’s refugees – with support measures that fall 25 percent short of the city’s poverty line. ISS is now also the subject of a corruption investigation by Hong Kong’s ‘graft-busting’ Independent Commission Against Corruption (ICAC), following a filing by three members of the Refugee Union.

ICAC is accountable to the Chief Executive, a situation that immediately presents a potential conflict of interests as long as the Chief Executive’s wife continues her association with ISS. The protest at Government House demanded Mrs Leung resign as patron of ISS, and criticised her for rejecting a written request to meet with refugees and hear their concerns.

Sally Tang Mei-ching posed the question, “How can an investigation [into ISS] be fair or impartial when the Chief Executive’s wife has an official relationship with ISS?”

The refugees’ struggle in Hong Kong has already notched up some important achievements, in exerting greater pressure on the authorities and raising public awareness about the inhuman treatment of refugees by one of the richest governments in the world – CY’s administration sits on cash reserves worth 21 months of total government expenditure. Hong Kong’s asylum system is “draconian” noted Tania Branigan in a recent report for the Guardian (UK), with refugees treated worse than prisoners!

The refugees’ campaign, which burst into the news one month ago with the simultaneous occupation of three ISS offices, has since moved to establish a permanent protest camp in the Wan Chai district, outside the Social Welfare Department. The Refugee Union has begun to organise itself and take on the task of winning over public opinion. For this, banners, placards, and speeches recorded in Chinese as well as English, have been necessary to spread the message to the majority community (97 percent of Hong Kong people speak Cantonese Chinese).

This is beginning to yield results with well-wishers visiting the camp and offering support. The aim is to challenge the systemic stigmatisation of refugees by the government (portrayed in its propaganda as ‘ungrateful’, ‘fake asylum seekers’ and ‘a burden on taxpayers’). The next stage of the refugees’ campaign must escalate this activity – to reach out to broad layers of discontented Hong Kong youth, workers and others who suffer under the government’s anti-democratic pro-business policies, to win them to the idea of united struggle against a common enemy. As a first step, the Refugee Union and its supporters will not let ‘Mrs CY’ off the hook. The campaign to smoke her out over her association with a shadowy and arrogant contractor has just started.

Greater pressure is needed especially for ‘radical’ and left-leaning political groups to end their silence and take a clear stand in sympathy with the refugees’ struggle. So far the honourable exceptions are Leung Kwok-hung in a personal capacity, alongside the members of Socialist Action, while unfortunately most anti-government political parties and groups – with far bigger resources – have yet to speak out. Some undoubtedly are afraid to give public support to the refugees’ demands believing – wrongly – that this will lose them support among their own voters.

Even if this were true, vital principles are involved in this struggle such as democratic rights (the right of asylum, public accountability), corruption and government-business collusion (ISS is a poster child for the evils of outsourcing) the fight against discrimination and the right to work. But in reality, as the refugees’ campaign is beginning to show, the government’s anti-refugee propaganda has no deeper support in society than its fake electoral reforms or its recent neo-liberal budget and other economic policies.

The Refugee Union has in just over one month assembled a formidable campaigning machine, which has begun to break the political isolation of refugees. There is still much to be done – new protests and more material to build active support. But if the political establishment thinks the refugee protests of recent weeks are a flash in the pan they are sorely mistaken. Refugee activism is now part of Hong Kong’s political landscape. 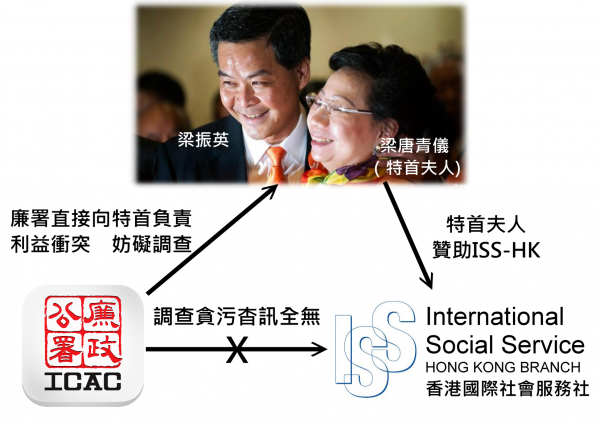