This film is based on the memoirs of Jordan Belfort, a finance shark who according to the US government still owes his victims US$100m in restitution. The film is banned in Nepal and Malaysia. Socialist Action is completely against bans and censorship, and strongly defends the right to free expression. But that doesn’t mean we won’t criticise reactionary or regressive ideas that appear in popular culture or art. Here, our reviewer Caroline Holmgren looks at the film’s portrayal of women. 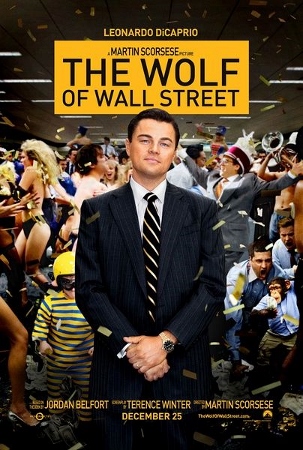 The Wolf of Wall Street is about successful men in the fortress of capitalism, New York, as the money they have stolen from ordinary workers buys everything that financial success offers: expensive cars, drugs and naked women.

Never before have I seen a movie where women are portrayed as objects to such an extent as in The Wolf of WallStreet. The first thing we see is the main character Jordan Belfort (Leonardo DiCaprio) snorting cocaine from a woman’sbutt cleavage. The following scenes arrange women around among the successful men like products on an assembly line, always naked and affectionate.

Director Martin Scorsese marks out his standpoint early: It’s all about suits and successful men in the stronghold of capitalism who buy happiness with money they get by tricking ordinary workers. The film takes us into the world that money and success can give you: expensive cars, endless amounts of drugs and strippers. Of course, it is not far from reality, but the scary thing is the romanticised view that the audience is offered. The incredibly degrading light that the important female characters are placed in reaches an almost absurd level.

Sexism runs like a red thread throughout the film so that it is impossible to ignore it and leave the rest of the story to one side.

“I filed for a divorce and moved Naomi into the apartment,” says Jordan Bedfort in one scene. Shortly before this he mentions her genitals as “his heroin” and it’s at this point that I wonder why I’m still sitting there in the theatre. But I sit tight and hope that a scene might turn up where one of the female characters says something of value or exchanges a normal conversation with each other.

But not once during the 3-hour film does the director succeed in portraying the female characters as something more than simple-minded creatures and sex objects whose greatest weapon is their genitalia.

In popular culture the so-called Bechdel Test (created by cartoonist Alison Bechdel in 1985) is used as a way to measure how women are depicted. For a movie to ‘pass’ this test it must fulfil the following criteria: 1) It must have at least two (named) female characters, 2) they should talk to each other, 3) about something other than men.

It might seem like three pretty simple criteria, but not once in the film were requirements two and three met. However, we must of course give Martin Scorsese a little credit since he named the entire four female characters. Sure, three of them were the wives of the leading male roles.

It is absurd that a sexist film that portrays women in such a degrading manner has become a critically acclaimed success. Have we really not progressed further than this?

Shortly after the news broke that Chris Brown had assaulted Rihanna, Chris Brown released a new album. One of the many reviews of that album said something like: “Don’t support violence against women by purchasing this disc.” This was taking a clear position.

A movie is not okay just because big names are on the cast list or a famous director made it. We are surrounded every day by sexist propaganda and objectification of women in the media and that is never okay, no matter who says or does it.

US: Pulled back from the brink – Flatlining Democratic majority reanimated by Republican extre...