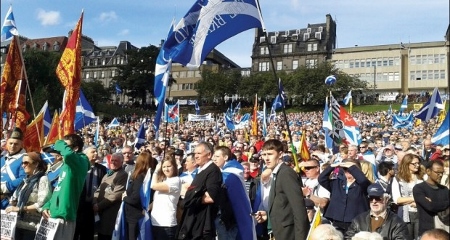 The growing conflict over Scottish independence has dramatically escalated following the coordinated intervention by the main pro-union parties who have ruled out an independent Scotland being allowed to form a currency union with the rest of Britain. This choreographed assault on the Scottish National Party (SNP) currency plan is designed to undercut support for independence ahead of the referendum in September. It may, however, have the opposite effect.

“If Scotland walks away from the UK, it walks away from the UK pound.” This was Tory chancellor George Osborne’s stark warning to those considering voting Yes on September 18th 2014. Within hours Labour’s Ed Balls had given the same message: “Alex Salmond is saying to people that you can have independence and keep the pound and the Bank of England. That is not going to happen.” Danny Alexander insisted it was “crystal clear a currency union would create unacceptable risks both for Scotland and the rest of the United Kingdom.”

Scottish first minister Alex Salmond responded by claiming that this was all “bluff, bluster and posturing” and that “the reality is that a formal currency union with a shared Sterling area is overwhelmingly in the rest of the UK’s economic interests…. the stance of any UK government will be very different the day after a Yes vote.” The Scottish National Party (SNP) leadership have also raised the possibility of refusing to pay Scotland’s share of the UK debt if they are frozen out of a currency union.

However, it’s clear that the outright refusal by the main capitalist UK parties to allow an independent Scotland to be part of a sterling zone is a serious threat. It reflects the overwhelming opposition of British capitalism to the possible break-up of the UK state. And, as the Socialist Party has continually pointed out, they are prepared to fight tooth and nail to prevent such a possibility from taking place.

As it slowly dawns on the SNP leadership that an independent Scotland may not be able to participate in a formal single currency arrangement, they are likely to put more emphasis on the other options contained in their “fiscal commission” which reported last year. In essence this put forward four options: a Sterling Zone, The Euro, a Scottish pound pegged to Sterling and fully separate Scottish currency. The SNP will still continue to argue for their preferred option, hoping that post a successful Yes vote there will be a change of position by the main capitalist parties.

Whether there is or not, the SNP leadership have failed to fully grasp the reality of the entrenched class opposition to Scottish independence by the majority of the British establishment, evidenced by this recent intervention. As an editorial in the Financial Times – the mouthpiece of the strategists of British capitalism – pointed out in relation to the consequences of Scottish independence; “what is not in doubt – and has been too little discussed – is that the rest of the UK would be weakened. The international status of the “rump UK’ would be diminished. Britain’s prized reputation for political stability would slip; investor confidence would be lost.” February 7th 2014. Or, as Tory prime minister David Cameron put it recently, “independence would rip the rug from under our reputation.”

It’s precisely this nightmare scenario that is driving the anti-independence campaign and which will escalate further as the referendum approaches. “Project Fear”, the self-styled name of the Labour and the Con-Dems Better Together campaign, has stepped up its propaganda drive recently in response to polls showing a small increase in support for independence.

Since the production of the SNP government’s White Paper on independence at the end of November 2013, there have been nine opinion polls asking how people intend to vote in September. The Yes vote stands at 40%, an increase from the 38% average from August to November 2013, the No vote is at 60%, once the Don’t Knows have been excluded.

Even this modest increase in backing for independence has sparked concern and nervousness in the pro-union campaign. Since the start of 2014 a deluge of press stories have appeared predicting an economic disaster should Scotland vote to separate itself from the UK. RBS will leave Scotland, as will Lloyds, Tesco Bank and Scottish Widows, power bills will rise, elderly care will be unsustainable, supermarkets will increase food prices, the pensions system will collapse.

Thus far these doom-laden predictions have not had the desired effect, the polls are not moving the way the pro-union lash-up had hoped for. Hence the need for Project Fear to move up a further gear.

But neither is the SNP’s vision for an independent Scotland having a significant effect in bolstering support for independence either. The White Paper from the Scottish Government confirmed that the under independence the SNP intend to continue with cuts and cuts taxes even further for big business. They are opposed to even modest measures of public ownership, even for the profiteering gas and electricity companies.

The plans for a currency union with the rest of the UK underpinned the SNP’s white paper. It would be the “best option for business.” Under Salmond’s plan, an independent Scotland would concede control over interest rates to the Bank of England and, in practice, give up a significant degree of control over Scottish budgets as well. This fiscal union as well as a monetary union would bind an independent Scotland into an austerity pact, with a Scottish government unable to increase public spending and put an end to cuts under these rules – or risk expulsion from the currency zone.

A separate Scottish currency – as advocated by sections of the Yes campaign and former deputy leader of the SNP Jim Sillars – would not offer an automatic way out either. Only a wide-ranging programme of socialist measures, including a refusal to pay the debt stacked up by the bailout of the banks in 2008/09 linked to the full democratic nationalisation of the banking system and the major sectors of the economy can lay the basis for a way forward and a full reversal of the cuts.

In effect the SNP’s “independence” is a form of “devo-max” with a large element of a federal arrangement still in place under so-called “independence.” Even more importantly they are predicating their vision on a continuation of a crisis-ridden capitalist system that can offer no way forward for the majority.

With seven months to go until the referendum, the outcome is undecided. There is huge anger among broad layers of the working class and young people at the impact of falling living standards and austerity. This is, despite the paucity of the SNP’s pro-market case, providing a solid base of support for a Yes vote among the working class. The move by the SNP – under huge pressure from the campaign – to effectively end the bedroom tax in Scotland is a reflection of this and can bolster support for independence.

The pledge by Ed Miliband to continue the cuts under a Labour government in 2015 can increase support for a Yes vote. WIth a withering social base in Scotland, the pro-union parties and the Better Together campaign face a significant headache. All this at the same time as a majority of the trade union movement in Scotland, including the two biggest unions – Unison and Unite – will refuse to back a No vote, despite their continued affiliation to the Labour party.

Socialist Party Scotland, while supporting a Yes vote in September, is campaigning against the SNP’s pro-business blueprint. We stand for an independent socialist Scotland as part of a democratic and voluntary socialist confederation with England, Wales and Ireland as a step to a socialist Europe.