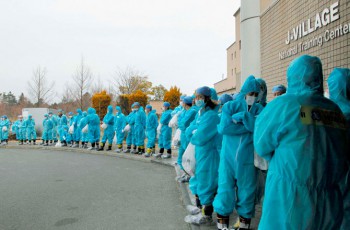 The nuclear disaster at the Fukushima Daiichi plant in March 2011 was the second worst nuclear disaster ever, after the 1986 Chernobyl disaster in Ukraine. Some scientists warn that Fukushima’s destructive effects may be even worse than Chernobyl. At Chernobyl there was a meltdown in one reactor, while at Fukushima three of six reactors suffered explosions and meltdown. This followed the powerful Tohoku earthquake and tsunami of 11 March 2011, which knocked out the plant’s electrical supply and water cooling systems, causing the fuel elements in the reactor cores to melt.

The Fukushima site contains a lot more nuclear material (over 1,700 tons) than Chernobyl did (180 tons). Both Chernobyl and Fukushima were ranked ‘level 7’ on an international scale of nuclear incidents, although the Japanese government initially understated the crisis, citing ‘level 4’ on the so-called INES scale, something that was immediately challenged by foreign experts.

In the three years that have passed the government and the plant’s owner, Tepco, which is the largest privately owned power company in the world, have been massively criticised for their bungled response, safety lapses, denials and cover-ups. In 2012 an independent investigation led by Dr Kiyoshi Kurokawa concluded the Fukushima disaster was “man made”. Since 2006, based on studies at that time, Japan’s nuclear regulator and Tepco were aware of the risk that a total electrical outage could occur should the plant be hit by a major tsunami. Tepco took no action and the regulator knew this but also failed to take action. The damning report from Kurokawa’s committee accused the government and its regulatory agencies of “collusion” with the nuclear power industry, which Kurokawa says have “formed a lobby so powerful that its actions have been largely untouched by the nation’s regulations.” (South China Morning Post, 8 March 2014). The report also blasted the government’s decision to allow Tepco to handle the ‘clean up’ operation, which it mishandled spectacularly, resulting in the government eventually taking over the process in 2013.

More than 160,000 people have been evacuated from the area around Fukushima and are unlikely to return. The plant’s manager Takeshi Takahashi has admitted that decommissioning Fukushima may take 30 to 40 years at a cost of at least US$100 billion. This is around 15 times the cost of building a modern single-reactor nuclear plant. This cost of course doesn’t include the longer-term threat posed by leaks of radioactive material into the environment. 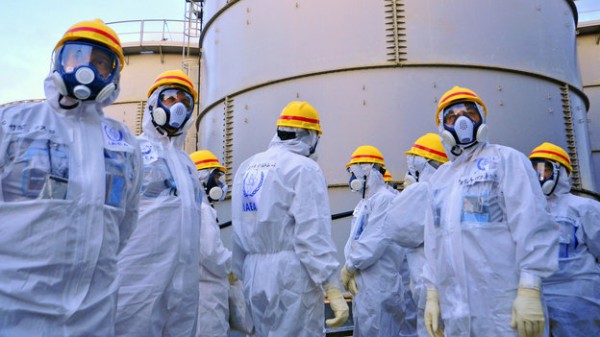 “Fukushima is the sea version of Chernobyl,” as one Japanese blogger put it. Tepco has been struggling to deal with the growing volume of water it uses to cool the damaged reactors. This water becomes highly radioactive and must be stored in gigantic containers, as tall as a 3-storey house, which are only a temporary solution. The storage tanks were constructed illegally in some cases by low-paid contract labour, raising further safety concerns. Several radioactive leaks have occurred including a serious ‘level 3’ incident in August 2013, when 300 tonnes of highly contaminated water leaked into the Pacific Ocean. This prompted many including Tepco’s leadership to say ‘international help’ was needed. Another leak involving around 100 tonnes of highly toxic water occurred in February 2014, after a valve on a storage tank was mistakenly left open.

In addition to incidents involving the storage tanks, lower-level contaminated groundwater that washes down from the mountains behind the Fukushima plant and through its foundations, runs into the Pacific Ocean at the rate of 300 tonnes per day. There it moves with the currents and is carried by marine life that absorb the radioactive toxins. The consequences of all this for the ocean and its ecosystems is now a major global concern. Fish caught off the coast of Fukushima in February 2014 were found to contain the highest levels of radiation since fishing was allowed to resume in 2012. Radioactive pollution from Fukushima has reached Hawaii and is set to reach the West coast of the United States by next year.

The largely untold story of the Fukushima disaster is the appalling price paid by workers involved in the ‘clean up’ operation. In 2011, following the disaster, Tepco cut the pay of its own workforce by 20 percent as it sought a financial bailout from the government. Around 12,000 workers are involved in the struggle to bring the Fukushima site under control and most of these are contract labourers employed by a vast number of subcontractors. In the wider evacuation zone tens of thousands are engaged on similarly precarious terms in clearing debris from the disaster. Among them are many homeless people ‘recruited’ by the Yakuza or Japanese Mafia, who run or have links with the subcontractors. The gangs have been used to ‘solve’ a labour shortage. According to Japanese police around 50 Yakuza gangs operate in the Fukushima prefecture.

“Tepco sits atop a pyramid of subcontractors that can run to seven or more layers,” noted a report by Reuters, based on interviews with several of the Fukushima workers. This is despite the fact that such arrangements using ‘third-party brokers’ are illegal in Japan. The Reuters report found that wages for these workers were about a third lower than the average in the construction industry.

“Although Japan must share the blame, this was not a Japanese nuclear accident; it was a nuclear accident that just happened to have occurred in Japan.” This is the verdict of a new book Fukushima: The Story of a Nuclear Disaster by three nuclear scientists, Lochbaum, Lyman and Stranahan. “The problems that led to the disaster at Fukushima Daiichi exist wherever reactors operate,” the authors conclude. Despite the terrible incalculable costs of Fukushima, the multibillion-dollar nuclear industry and many governments are pushing ahead with nuclear expansion plans. Nowhere is this more the case than in Asia, where 49 new nuclear plants are under construction and 100 more are planned. The countries targeting the biggest increase in nuclear power are China, South Korea and India.

In September the right-wing government of Shinzo Abe celebrated being awarded the 2020 Olympics despite nuclear safety fears. “It is immoral to invite the Olympic Games to Japan where the health environment cannot be secured,” a former Japanese ambassador to Switzerland, Mitsuhei Murata, declared at the time.

Abe is committed to restarting Japan’s 50 nuclear reactors, which have been shut down since the 2011 disaster. Feelings on this issue run very deep in the only country to be attacked by nuclear weapons. In 2013, more than 200,000 marched through the streets of Tokyo to demand a nuclear-free Japan. A poll in February 2014 for Fuji television found that 53 percent are opposed to restarting any of Japan’s nuclear reactors. This is despite the government’s attempts to manipulate public opinion and a 20 percent rise in household electricity bills since the disaster.

The nuclear struggle also featured in February’s election for Tokyo’s governor. Abe’s candidate Yoichi Masuzoe, who is pro-nuclear, emerged the winner over two candidates who campaigned against nuclear power – lawyer Kenji Utsunomiya (backed by the Japan Communist Party and the Social Democratic Party) and former prime minister Morihiro Hosokawa (backed by the opposition DPJ). In an election where the economy overshadowed the nuclear debate, the two anti-nuclear candidates collected 40 percent of the total vote.

Former Prime Minister Naoto Kan of the Democratic Party of Japan (DPJ), who was in power when the Fukushima disaster struck, says he has undergone a total political conversion over this issue:
“My position before March 11 was that as long as we make sure that it’s safely operated, nuclear power plants can be operated and should be operated. However, after experiencing the disaster of March 11, I changed my thinking 180 degrees completely. We do have accidents… and sometimes hundreds of people die in an accident. But there’s no other accident that would affect 50 million people – maybe a war – but there’s no other accident so tragic.”

But capitalist politicians cannot be trusted to wage a serious struggle against the nuclear power industry, backed by powerful corporate (Toshiba and Mitsubishi for example) and military interests. A nuclear-free future also requires a plan for massive investment in safe and renewable alternatives. Pro-capitalist politicians inevitably bow to the dictates of the big capitalist corporations with their addiction to short-term profits. Kan’s government broke its 2010 election promises and jettisoned proposed social reforms, paving the way for Abe’s Liberal Democratic Party (LDP) – which counts energy company executives as its main source of funding – to sweep back to power in 2012.

Socialists and the CWI welcome the anti-nuclear protest movements that have swept Japan and other parts of Asia, while we also stress the need for these movements to offer a programme against capitalism. Only by replacing the anarchic ‘market’ with a system of democratic socialist planning based on public ownership can society develop the huge potential of renewable energy (such as wind and solar power) and thereby shift the world’s energy policies onto a safe trajectory.