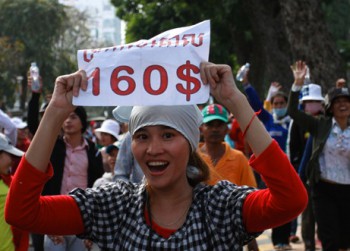 Fight for a living wage met by brutal government crackdown

When we march on International Women’s Day, 2014, special recognition should be accorded the women garment workers of Cambodia who staged a magnificent nationwide strike at the start of this year, involving 100,000s of textile workers, nine-tenths of which are women.

On 3 January the country’s dictatorial Prime Minister Hun Sen unleashed his ‘praetorian guard’ (the elite 911 paratroopers answerable directly to him) against the workers in order to quell the strike, which was merging with mass anti-government protests into a frontal challenge to the regime. The troops fired live ammunition into groups of protesting workers and youth. Five workers were killed and dozens injured in what human rights groups count as the worst state violence for 15 years.

At the same time a 1,000-strong protest camp in the capital Phnom Penh was raided, its occupants beaten and driven away. A de facto state of emergency was imposed on the capital. 21 workers’ representatives remain behind bars since the suppression of the strike. Socialist Action (CWI in Hong Kong) has taken part in protests to the Cambodian authorities to demand the release of these workers.

The garment industry has become the backbone of Cambodia’s economy, accounting for 80 percent of all exports. Hun Sen’s government has achieved this by ‘out-sweating’ the sweatshops of other Asian producers including China, where industry wages are now three time higher than in Cambodia. Between 2003 and 2011, China’s foreign direct investment (FDI) in Cambodia increased from $2.2 million to $566 million (a 257-fold rise). Chinese and Hong Kong capital are major players in the Cambodian textile sector (Hong Kong-owned factories are 20 percent of the total and China-owned are 18 percent) and put pressure on the Phnom Penh government to end the strike. It cannot be excluded that Chinese officials advised the Cambodian regime in cracking down, given the close links between the two governments.

The strikers’ main demand was for a doubling of the pitiful minimum salary in the garment sector, from US$80 (620 HKD) to US$160 per month. The industry has seen a wave of mass fainting, with up to 100 workers collapsing on the same factory shift as a result of exhaustion, malnourishment and chemical fumes. NGO groups say a minimum wage of US$250 would be needed to provide workers and their families with enough to eat.

The strike began on 24 December, following an announcement by the government that it would only raise the minimum wage in the industry to US$95 per month. This was far short of the workers’ demands for US$160. Women make up the overwhelming majority of textile factory workers and almost all are supporting families, often children. Workers complain of soaring living costs for housing, food, schooling, transport and healthcare. The strike was backed by seven trade union federations representing 250,000 workers in the textile, garment and footwear industries. Some reports say that 300,000 took part in the strike.

Tola Moeun, from a Phnom Penh-based labour advocacy group told the Inter Press Service (9 January 2014) that, “Cambodian garment workers have two handcuffs and one weapon [against them]. One handcuff is a short-term contract [10 hours a day, six days a week]. Even if they get sick, if they get pregnant they feel they have to get an abortion so they don’t lose their jobs. The second handcuff is the low wage. The weapon used against them is violence, both mental and physical.”

Hun Sen, who has ruled the poverty-stricken country with an iron fist for 28 years, stands accused of widespread election fraud following the July 2013 parliamentary election which the ruling Cambodian People’s Party (CPP) narrowly won. Anti-government protests began immediately after the stolen election and reached a highpoint in December, fusing with the garment workers’ strike.

When the bourgeois opposition leaders of the Cambodian National Rescue Party, changed their earlier position and voiced support for the textile workers’ wage demands, this injected extra fuel into the anti-government protest movement. 50,000 people marched in Phnom Penh on 29 December to demand Hun Sen’s resignation. Centre stage was taken by the striking textile workers, which shows the potentially decisive power of the working class as the spearhead for social change. Fearing the garment workers’ action could escalate into a possible general strike, with increasingly political demands against the regime, massive repression was deployed by Hun Sen’s government.

Strikers were ordered by the Minister of Labour to return to work on January 2. What followed was “an unprecedented crackdown” to quote Al Jazeera. On January 2 security forces blocked the route of a workers’ march and then attacked. On January 3 the massacre by elite soldiers took place in a factory district on the outskirts of Phnom Penh, the Canadia Industrial Park. The government announced a ban on gatherings of more than ten people and the bourgeois opposition leaders called off further protests. Union leaders too, decided to call off the strike in the face of repression. This, however is not the end of the matter. Anger is simmering in the textile factories and new strike threats have been heard.

The government survives but by brute force. Given the conditions in the factories – of semi-slavery – it is only a question of when, rather than if, new mass struggles will explode. The working class of Cambodia needs to build democratic unions answerable to the members. It also needs to be politically independent from all the capitalist parties, by building a workers’ party to fight the government and the capitalists and demand control over the factories that drive the nation’s economy.