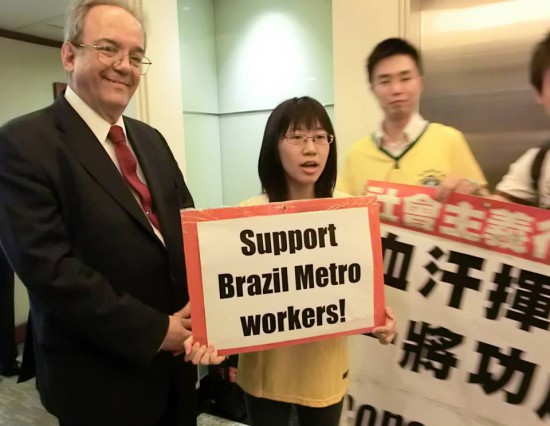 On Friday 13 June supporters of Socialist Action (CWI) in Hong Kong protested at the city’s Brazilian consulate. The protest was one of many around the world coordinated by the Committee for a Workers’ International in solidarity with Brazil’s mass protest movement and the CWI’s section LSR which is active in the protests. The protests are against the repression of social movements during the football World Cup, and in solidarity with the “People’s Cup” (a land occupation organised by the MTST – a homeless workers’ movement).

The World Cup started on 12 June with a controversial game in which the Brazilian hosts beat Croatia 3-1. There has been a storm of online criticism not least in Japan over the conduct of veteran Japanese referee Yuichi Nishimura who awarded a soft penalty to Brazil. But disputes on the pitch are overshadowed by the wave of mass struggle taking place around the tournament, against the extravagant waste of Dilma Rousseff’s government, which has lavished US$11.5 billion on the World Cup, compared to an original plan of US$1 billion.

This money has been poured into glittering stadiums and ‘vanity projects’ in a country that badly needs funds for hospitals, schools and housing instead. The feeling is widespread that the World Cup is only for the rich, the construction cartels and other business interests. Many ordinary citizens cannot afford the high ticket prices to see the games.

“With the World Cup there was a big increase in real estate prices (of up to 200 percent in some areas of the city) and large rent increases,” explains André Ferrari of LSR (Liberdade, Socialismo e Revolução). “Millions of workers are forced to leave their homes and live further away from their workplace, further exacerbating the problem of urban mobility in a city like São Paulo.”

Metro workers in São Paulo went on strike for five days prior to the opening of the World Cup and have threatened new strikes unless 42 workers sacked for striking are reinstated. Other protests and strikes continue in Brazil. This includes a 24-hour strike by workers at Rio de Janeiro’s three main airports. The opening of the World Cup has been accompanied by an exceptional deployment of state repression. Brazilian military police used tear gas and rubber bullets to disperse the demonstrations in several cities.

The Wall Street Journal reports that Rousseff’s government is spending 1.9 billion reais (US$855 million) on security during the World Cup, with the deployment of 57,000 military troops and around 100,000 police, plus new equipment and weaponry. Not surprisingly, 61 percent of Brazilians think the World Cup is a bad thing for their country according to a poll by the Pew Research Center.

At the Hong Kong protest, members of Socialist Action presented a letter to Brazil’s Consul General José Antonio de Castello Branco de Macedo Soares. They chanted “Shame on Sweatshop World Cup,” and “Reinstate sacked Metro Workers.” In reply to questioning, the Consul General said the the sacking of the Metro workers in São Paulo was a “legal issue” and that Brazil had a “socialist government.” When the protesters expressed scepticism to his description, pointing out that China claims to have a ‘communist’ government, he replied, “That’s a different matter!” 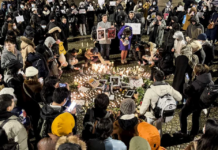