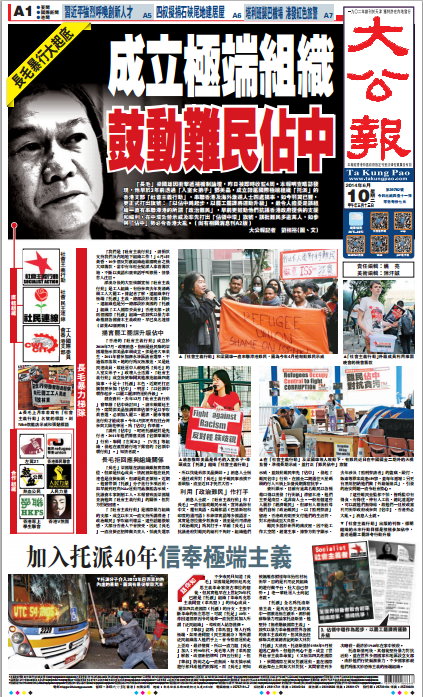 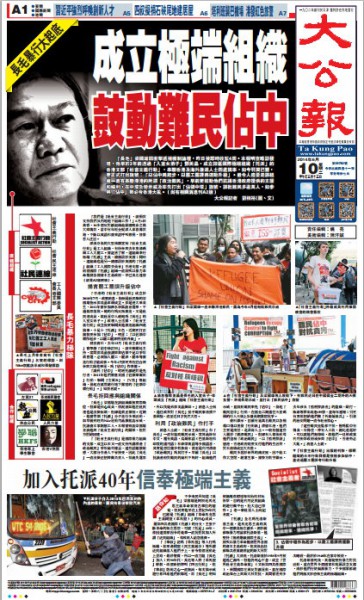 The pro-Beijing newspaper, Ta Kung Pao, ran a front-page attack on pro-democracy legislator Leung Kwok-hung (known as ’Long Hair’) and Socialist Action (CWI in Hong Kong) in their 10th June edition. This propaganda piece in a daily newspaper infamous as a Hong Kong mouthpiece for the Chinese Communist Party (CCP) dictatorship, comes as Hong Kong’s democracy struggle enters a crucial phase in the run up to the annual July 1 mega-demonstration against the government. The Chinese regime is stepping up its psychological warfare against ‘political instability’ and ‘illegal’ demands for free elections in Hong Kong.

Socialist Action is seeking legal advice over the article’s slanderous nature, a hallmark of this newspaper, while at the same time conducting a vigorous political defence to expose its lies.

The newspaper falsely claims ‘Long Hair’, who is currently serving a four-week jail sentence on trumped up political charges, masterminded the creation of Socialist Action in 2010 to be a more extreme force in the democracy struggle. Absurd accusations and slanders of this type run throughout the article, which conjures up the bogey of “foreign forces” i.e. the Committee for a Workers’ International (CWI), to which Socialist Action adheres. Ta Kung Pao accuses the CWI of advocating “very violent methods” and accuses its sections in Brazil, Sweden and Turkey of fomenting riots last year. This is standard stuff, in other words, from the paid hacks of a dictatorship whose level of paranoia is unparalleled when it comes to mass protests, democratic ideals, and genuine socialism.

Ta Kung Pao’s concern over violence is worthy of an ‘Oscar’ given its silence over the military massacre of protesters in Beijing in 1989. It attacked this year’s 180,000-strong commemoration of the June 4 massacre victims as an “act of national betrayal.”

“The CWI’s methods of protest are very violent,” the article claims. “On 20 May 2013, the CWI’s Swedish section Rättvisepartiet Socialisterna initiated a protest against the Swedish government’s social policies and lack of public services. The protesters set fire to cars, destroyed shopping centres and attacked police stations, and this resulted in three days of riots. Many police and members of the pubic were injured.”

This is just one example of Ta Kung Pao’s deranged ‘journalism’. Last year’s riots in Stockholm were triggered by police shooting dead an elderly man, following years of racism and neglect of public infrastructure in working class districts. The CWI’s section initiated a protest meeting together with local community groups to appeal for an end to the burnings and rioting while sharply criticising police brutality and the government’s neo-liberal policies.

As in similar outbreaks in Britain, France and China, the CWI has always made clear it does not believe rioting, while understandable as a reaction to desperate social conditions, offers any way forward for mass struggle against capitalism, unemployment and poverty. We stand for organisation – workers’ parties and fighting unions – and disciplined collective methods of mass struggles, such as workers’ strikes and occupations linked to building a socialist alternative.

Ta Kung Pao’s take on the Brazilian mass protests of 2013, currently being reprised during the World Cup, is even more fantastic! Stating that 300,000 people took part in protests against fare increases, it says the police used repression against “criminal organisations” and that “many of those arrested were members of the CWI section, LSR.”

The article rails against Trotskyism which it describes in quasi-Maoist language as an “ultra left, violent” political trend: “Many countries regard them as extremist organisations second only to terrorism”. It attacks the theory of permanent revolution, which it converts into a doctrine of ‘permanent rioting’. In reality, the permanent revolution is Leon Trotsky’s brilliant conception of how the capitalists in colonial and semi-colonial countries are incapable of completing bourgeois democratic tasks, achieving national unification or solving other problems left over from feudal society. Hong Kong, China and many other parts of Asia are living proof of the correctness of Trotsky’s theory, which explains why workers need to organise a mass socialist alternative and not leave the struggle against dictatorship or foreign imperialist domination to any wing of the capitalists.

Ta Kung Pao’s article is part of a wider CCP propaganda offensive to discredit the most radical sections of the democracy struggle. The aim is to link ‘Long Hair’ with the CWI and tar both with the brush of ‘violence’ and ‘political extremism’. Among the more outrageous accusations, it claims that Socialist Action cooperates with Civic Passion, a right-wing ‘nativist’ (Hong Kong nationalist) group which conducts a vicious smear campaign against Socialist Action. In contrast, while representing different political organisations and programmes, Socialist Action and ‘Long Hair’ have cooperated in many struggles for workers’ rights and against the Chinese dictatorship.

The CCP‘s propaganda offensive is linked to the more charged political situation in Hong Kong and China. It is clearer than ever that Beijing has no intention of allowing free elections (universal suffrage) in Hong Kong in 2017 as people were once led to believe (but as CWI comrades warned would not be the case). Instead a rehash of the current ‘controlled’ election model is being served up, causing widespread anger. Last week, China’s state council (cabinet) unveiled a white paper on Hong Kong that spells out that the territory’s “high autonomy is not full autonomy”. This document, unprecedented since the 1997 handover (from Britain), is widely seen as the Chinese regime putting its foot down over demands for greater democracy. Its publication follows a string of warnings by pro-government politicians that martial law could be imposed in Hong Kong and PLA troops deployed to quell protests.

At the same time, the bourgeois democratic opposition parties (pan democrats) have enormously complicated the democracy struggle through their desire to avoid and limit mass struggle and pin all their hopes on a compromise with the CCP. The accusations of violence from the establishment camp and newspapers like Ta Kung Pao are a deliberate attempt to slander the most radical sections of the democracy struggle, such as ‘Long Hair’, and to increase pressure on the dominant ‘moderate’ wing of the pan democrats to dissociate themselves from ‘extreme’ methods.

The latter shamefully condemned ‘Long Hair’ – tabling a motion against him in the legislature – when he was arrested and subsequently charged for ‘criminal damage’ and ‘disorderly conduct’ during a 2011 protest. This was against a sham government-run consultation process over tightening by-election rules, used as a cover for further attacks on democratic rights. ‘Long Hair’ received a two-month prison sentence (which would have resulted in the loss of his elected seat in the legislature), subsequently reduced to four weeks on appeal. It is this sentence for a fictitious ‘crime’ that he is currently serving.

Ta Kung Pao’s attack is, for all its venom, a twisted recognition of the impact Socialist Action/CWI is having and the Chinese dictatorship’s fear of socialist ideas. The article mentions the 2011 District Council election campaign when Socialist Action ran Sally Tang Mei-Ching as a candidate, and even mentions that she went to Taiwan on Socialist Action/CWI’s behalf during the mass ‘sunflower’ protest movement earlier this year.

It refers to Socialist Action’s call for the Occupy Central movement (a plan to occupy streets in the main business district, led by ‘moderate’ pan democrats) to embrace a more fighting programme and approach including the need for strike action as a key weapon in the anti-CCP struggle, beginning with a call for student strikes. Ta Kung Pao, of course, distorts this, wishing to equate strikes with ‘violence’ and ‘extremism’ – which is how the dictatorship and the capitalists actually view workers’ use of the strike weapon today.

Reporting Socialist Action’s support for the Refugee Union’s campaigns in Hong Kong, it claims this is to “use refugees as hatchet men” in order to prepare and radicalise the Occupy Central movement. The refugees, whose 120-day occupation and protest camp against discrimination and corruption has been a model of discipline and restraint, are portrayed as criminals that fit in with Socialist Action’s alleged plan because they “do not fear prison”. As with its accusations about the rioting overseas, Ta Kung Pao does not produce a single fact to back up its accusations. An additional aim is to link ‘Long Hair’ with “foreign forces” in the shape of the CWI and the Refugee Union. This plays to a pet theme of CCP propaganda today, promoting chauvinistic Chinese nationalism and an alleged overseas conspiracy to ‘split’ China. The article stresses that Socialist Action has “foreign” members and links to “foreign organisations” – something that would be outlawed if pro-CCP security legislation known as ‘Article 23’ is passed in Hong Kong. This legislation has been held up for 10 years by mass pressure, but has not been abandoned by the pro-government camp.

While Ta Kung Pao is highly discredited in Hong Kong as a newspaper kept afloat by CCP money, there’s no escaping the implicit threat in its attack on the comrades of the CWI. Hong Kong and China are moving into stormy times and the dictatorship is identifying and vilifying its political enemies. Rather than being intimidated, however, socialists will be even more determined to fight for genuine democracy, including a democratic and publicly owned media, and to build mass organisations of the working class and the youth, to finish off capitalism and dictatorship.