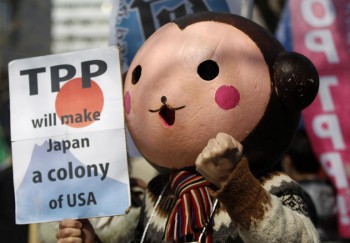 The Trans-Pacific Partnership (TPP), which is still being negotiated, will be one of the largest trade deals in history. Originally a ‘traditional’ free-trade agreement between a handful of countries, it was taken over, expanded and radically reshaped by the US. Now much more than a deal designed to remove tariffs, it is the economic centrepiece of the Obama administration’s so-called ‘pivot to Asia’. It has the potential to lock neoliberalism into law in a way the world has never seen.

It is impossible to understand the TPP without acknowledging its political context, namely the ever-present backdrop of US-China rivalry. The Obama administration has deliberately shaped the TPP as a political bloc to contain China, relying on allies old and new to re-establish US power in the region. While many of the participant nations rely heavily on China economically, they want to slow Beijing’s ever-increasing dominance in Asia and thus its capacity to dictate economic terms.

The TPP negotiations include the US, Brunei, Chile, Singapore, New Zealand, Vietnam, Peru, Mexico, Malaysia, Japan, Canada and Australia. Negotiations have been top-secret, with access being given only to trade ministers and delegations, as well as representatives of major companies who stand to profit from the partnership.

The secrecy surrounding the negotiations is especially repulsive given the massive scope of the TPP and the devastating impact it will have on the lives of ordinary workers, farmers and the poor. Working people in all the affected countries have been completely shut out of discussions which will determine their futures.

The TPP will not just remove tariffs in particular industries. It is designed to forcibly open up new markets for financial speculation, end government subsidies to weaker sectors of the economy, push back the role of state-owned enterprises, and grant corporations the power to punish states for many forms of government regulation. Despite the details being kept mostly secret, there are some things we know are in the works.

Many people might be shocked to know that in a world still reeling from the devastation caused by the global financial crisis, the TPP aims to prevent financial regulation designed to stop risky ventures by banks. Things like capital controls will be severely limited if not banned under the TPP, greatly weakening governments’ ability to rein in wild financial speculation to forestall another crisis.

The TPP will dramatically extend copyright and patent laws. This is not aimed at protecting individual inventors’ rights and earnings, but rather is designed to boost the mega-profits of big business in the pharmaceutical, media and technology industries. Here we see an example of the capitalists demanding more regulation – to protect their monopoly positions – whereas for the public sector, workers’ jobs and rights, they favour massive deregulation.

For example, because the agreement will limit a state’s ability to regulate the market, attempts to control drug prices would become seriously weakened, if not outright illegal under the TPP. The price of medicines will skyrocket, posing serious dangers for ordinary people’s health but promising endless, legally mandated profits for big pharmaceutical companies.

Government procurement regulations are also firmly in the TPP’s sights. The agreement would see any firms – domestic or international – operating in a region given basically equal access to government tendering processes, for example to determine who operates public services or government infrastructure projects. In effect, regulations granting preferential treatment to local companies would become illegal.

This would severely limit a government’s capacity to protect weaker sectors of its economy. For example, attempts to prop up an industry such as manufacturing in order to save local jobs would no longer be possible. These measures would forcibly open up previously closed or protected areas of a nation’s economy to financial speculation and investment. It goes without saying that this will result in job losses, weakening of workers’ rights legislation and further downward pressure on wages.

The TPP also targets farming subsidies and tariffs. Despite the agreement’s many repugnant attacks on ordinary people, this aspect of it has garnered the most controversy and media attention. This is understandable considering the domestic political weight of farmers in certain TPP nations such as Japan.

The TPP aims for the removal (or at the very least the massive reduction) of farming subsidies and agricultural import tariffs. In many nations this would render small farmers incapable of competing with large agribusiness. It will force small producers out of the market and write into law the dominance of big business.

But perhaps the most disturbing aspect of the TPP is the proposal that companies be given near-equal legal status with national governments. If regulation introduced by one government was seen to undermine or threaten the profits of a company such as Monsanto or Walmart, the government could be sued.

Potential threats to the capitalists’ profits include government regulation of drug prices so ordinary people can afford medicine, minimum wage laws, workers’ rights legislation and protection for small farmers and small business. If a government was pressured by domestic political movements to implement any of these measures it could be taken to an international court!

The TPP is one of the grandest attempts to wind back the gains of past struggle that the world has ever witnessed. It would legally lower the status of national environmental protections, labour rights, welfare rights and human rights below that of the profit motive. While the ‘race to the bottom’ is a well-known feature of capitalist globalisation, the TPP aims to make this race become legally enforceable!

The TPP negotiations are still underway and fraught with disagreements. All the governments involved have domestic concerns to consider that will play a big role in their political future. For example, Shinzo Abe’s LDP in Japan contested last year’s elections on a platform of retaining existing high tariffs on agricultural products, something deeply at odds with the TPP’s aims.

Similarly, Malaysian Prime Minister Najib Abdul Razak is under domestic pressure to withdraw from the talks. Half of Malaysia’s stock market capitalisation is represented by state-owned enterprises, which in effect must be dismantled under the TPP.

Rising international tensions are also a massive factor for the governments involved in the TPP talks. The outlines of a new ‘cold war’ are emerging between a US-led bloc, which TPP aims to solidify, and an increasingly assertive China. Japan and Vietnam face increasing territorial confrontation with China, and are talking tough on this front. Japan’s recent announcement of a military radar construction near Taiwan and a submarine deal with Australia are the latest aggressive steps in its ongoing dispute with China over the Senkaku/Diaoyu islands. The Vietnamese regime was furious and partially sanctioned anti-China riots that resulted in at least four deaths over China’s deployment of an oilrig near the disputed Paracel Islands.

These increasing confrontations will put further pressure on Tokyo and Hanoi to commit to the TPP, which would include them in a more intimate political bloc with the US. In the case of Japan this has seemingly overridden domestic concerns, such as the reputed untouchability of the ‘gentan’ policy which protects Japanese small rice farmers.

At the same time some candidate nations are clearly hedging their bets regarding the TPP’s future, for example establishing trade deals amongst themselves that go against some central proposals of the larger agreement by retaining high tariffs. A recent FTA between Japan and Australia, for example, incensed some other parties involved in the TPP negotiations.

China, for its part, is also hard at work building its economic influence in the face of attempted US containment. The recent $400 billion China-Russia gas deal – the biggest ever – is a major blow to US and European Union attempts to contain Russia, and a confident nose-thumbing by China to its competitors. The Cross-Strait Service Trade Agreement (CSSTA) with Taiwan, which inspired the ‘sunflower movement’, is another example of the Chinese regime attempting to expand its economic influence in the face of containment.

For the time being it is business interests – both for and against the TPP – putting the most pressure on governments across the region. The working class has not yet stepped into the fray. But just as the ‘sunflower movement’ had the potential to put an end to the anti-worker CSSTA in Taiwan, mass opposition can put an end to the TPP.

Our region is characterised by an increasing arms race and growing nationalism. Increasingly, governments are attempting to divide workers in different countries with calls to defend national interests and ‘sovereignty’. While this is happening, the same capitalist governments are teaming up to allow public resources and infrastructure to be looted by speculators.

Struggle against nationalism and capitalism

The sort of movement we need to successfully defeat the TPP has not yet emerged. In part trade union leaders bear responsibility for this: they have spoken up either in a tokenistic manner or not at all about what will be an absolute catastrophe for workers’ rights and living conditions in the region.

Another barrier to building the sort of movement required to defeat this extreme anti-worker pact is the general lack of political alternatives in the region: in all of the countries involved in the negotiations the major parties are parties of big business.

Working people must cooperate internationally to put an end to this extreme neoliberal model and kill the TPP permanently. We must also fight together to put an end to the system of capitalism that wants big business profits written into law at the expense of workers’ rights and increasing poverty.

The Committee for a Workers’ International (CWI) is active in many countries in the region, and will determinedly fight against the TPP and other big business trade pacts, linking this to fight capitalism and militaristic nationalism. We fight for an international socialist alternative to democratically plan the economy and trade to meet the needs of society rather than profit.