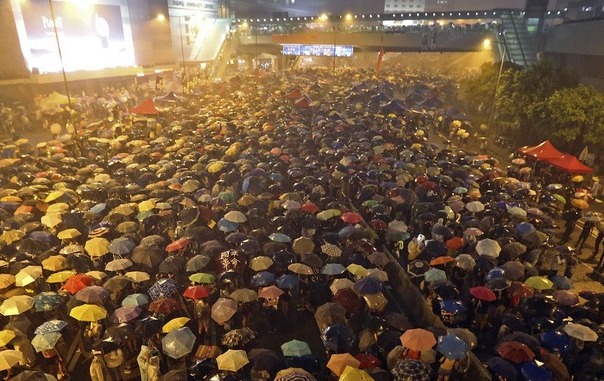 The Hong Kong political crisis has taken new dramatic turns. The government’s attempt to use fake negotiations to disband the protest movement has fallen apart. CY Leung has been exposed as a corrupt ruler, and not just a brutal one. The revelations of underhand business dealings involving Australian engineering company UGL which paid Leung HK$50 million (US$6.4m) in 2011 when they took over his insolvent property company DTZ, have had the effect of a political bomb blast. Investigations have now been started in both Hong Kong and Australia. CY is under fire for questionable aspects of the deal both in business terms (the deal was never reported to DTZ’s auditors Ernst & Young), and because its terms make him an “advisor” to the Australian company in breach of Executive Council rules, the unelected ruling body which Leung heads.

This scandal is the reason why Carrie Lam called off the negotiations with the students – the government is badly damaged and fears the talks could be turned into a platform for even louder calls for CY’s resignation. The government also want to ‘broaden’ any negotiations to include the most conservative compromise-friendly wing of the pan democratic (bourgeois liberal) leadership including OCLP (Occupy Central with Love and Peace), a campaign group which has been more and more exposed as a brake on the mass protests. These leaders are much more to the government’s taste than the students, because they have clearly stated they want the occupations and mass protests to end.

Socialist Action says the mass protests must be relaunched, especially by issuing a clear call for the all-Hong Kong school strike to resume with full force. There is no time for hesitation. The occupations must remain and not surrender another inch of occupied territory. Democratic action committees need to be organised to win the support and listen to the problems of local residents and small businesses, while also organising self-defence against attacks.

To consolidate these moves, and make a new wave of struggle possible, it is necessary to overcome what has become the biggest problem in the ‘umbrella movement’: the need for grassroots organisation and a democratically elected leadership. We must build from below an alternative to the self-appointed ‘small circle’ leaders who speak in the movement’s name but tell us to go home!

The magnificent ‘umbrella movement’ has changed Hong Kong forever. Whatever happens now, a new generation have entered into the political struggle and they are more determined than ever to fight for real democracy and not be cheated again as has happened so many times before.

We cannot trust this government, which has bottomless reserves of violence and trickery. It was predictable that the government would change its tactics: to pull back the police after the violent gas attacks failed, and instead use pro-government “blue ribbons” and gangsters to attack the protesters. The aim of the government’s terror campaign was to cause the compromise wing of the protest movement to panic and call for an end of the occupations and strikes. This succeeded, but only among those leaders who were always sceptical and reluctant about the protests. The calls for the protests to end have met stiff resistance from ordinary working people and youth – the backbone of the protests. The movement also continues to enjoy huge public support and hopes. Polls show 60 percent of Hong Kong people reject the NPC August ruling (that makes clear Beijing will never allow genuinely free elections), while just one in five people support it.

Too many times in Hong Kong, a mass protest movement has been left empty-handed because the leaders are not under democratic control and, while there are thousands of single-issue NGOs, there are no genuinely mass organisations, especially workers’ organisations, that can hold these leader to account. Too often the pan democratic leaders have walked into the trap of fake dialogue with the CCP dictatorship or its local minions – dialogue that only has one purpose: to get people off the streets without offering any real or meaningful change.

Need for a workers’ party

The successes of any struggle, especially such a historic movement, have to be measured by concrete gains, not empty promises. This means nothing less than the downfall of CY Leung’s cruel and corrupt government, and a refusal to accept any successor other than through a genuinely democratic election, without the CCP’s Big Business-dominated nomination committee. There must be no restrictions on which candidates can stand.

As far as Socialist Action is concerned, this also means the replacement of the current rubber stamp legislature with a genuine people’s assembly, with its members fully elected, subject to popular recall, and paid only a skilled workers’ wage. As in Scotland’s recent referendum, the voting age should be cut to sixteen, with young people having shown beyond any doubt the crucial role they play in society’s political development.

Socialist Action links the democratic struggle to the need to fight capitalism, particularly the need for a new mass workers’ party to coalesce from among the working class and left layers of this movement. This is needed to challenge the dictatorial economic power of Hong Kong’s tycoon families and build support for a socialist alternative with democratic public control over the banks and property companies as the only way to relieve the unbearable burden of housing costs – officially the ‘most unaffordable’ in the world – as well as the scourge of poverty, stagnating real wages and privatisation of public services.

The struggle must also be spread to the mainland, by supporting illegal workers’ struggles in China’s sweatshops and the fight against state repression. This is the only viable strategy to defeat the CCP dictatorship, which today constitutes a seemingly insurmountable ‘roadblock’ for democracy in Hong Kong, as well of course as China itself.

Already some 40 activists have been arrested in China for staging solidarity actions with the Hong Kong ‘Umbrella Revolution’. In coming days there are plans for a protest with umbrellas in Tiananmen Square. This is despite the massive media blackout of the CCP dictatorship and its propaganda offensive to portray the Hong Kong movement as a “Western conspiracy”. Imagine what response the movement could get in China if a clear call was issued from our movement? So far no section of the leaders has made such a call. It is false to believe that if we keep out of China’s “internal politics” the CCP will look more favourably on concessions to Hong Kong. There are no half-measures in the struggle for democracy: either the dictatorship wins (and Hong Kong won’t get democracy) or it loses (and we establish democracy both sides of the border).

The ‘umbrella’ must be passed from Hong Kong to China, and the sooner the better. But this requires a programme based on the interests of the working class and the poor, in China and Hong Kong.

The struggle needs action committees in every occupation, to coordinate mobilisation and especially to organise self-defence, with similar democratic bodies established in schools and workplaces to build the strike movement. These committees must decide tactics and which political responses are needed through open and democratic discussions. Only a fully democratic movement is capable of defeating the government.