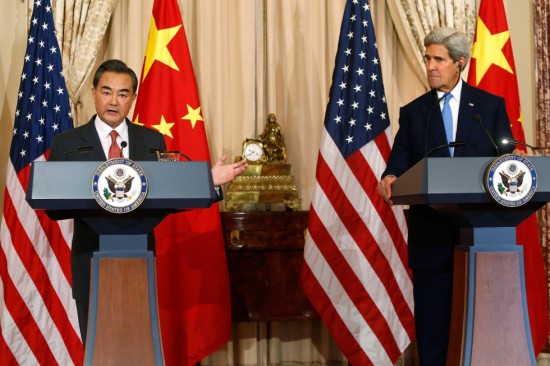 The CCP-run media claims Hong Kong’s mass democracy protests are in fact a plan masterminded by Western powers to split China and prevent its economic rise. These claims form an important part of Xi Jinping’s nationalist agenda to ward off demands for democracy inside China by claiming this is part of a foreign plot and will bring ‘chaos’ and ‘disorder’.

The CCP’s ‘colour revolution’ refrain is disproved by many facts on the ground. Firstly, socialists and many left activists who actively oppose US imperialism and its military aggression are very active in the democracy struggle even if at this stage we represent a minority within this movement. Socialist Action for example has organised protests in defence of US whistle-blower Edward Snowden, in solidarity with Gaza (against US-backed Israeli terror), and against the US wars in Iraq and Syria. That we oppose both the governments in the US and China is by no means contradictory, as both represent the interests of billionaires and oppress the vast majority of their own people.

Secondly, we can see through the hypocrisy of the Chinese dictatorship, which uses the “US threat” selectively when this suits its propaganda purposes. The fact is that China’s ruling elite is locked in an extensive and complex economic partnership with US capitalism. True, this relationship is becoming more turbulent as China’s rise encroaches on US great power interests in many parts of the world. Still in economic terms this is the biggest and most important relationship in the history of world capitalism, and it forces both governments to tread carefully when disputes arise.

The two economies are connected by gigantic trade and financial links, as well as China’s massive holdings of US government debt. All the biggest US companies are major investors in China. For many of them – such as General Motors, Yum Brands (KFC), Boeing and Apple – they sell more goods in China than in America. But this year also saw a historic shift as Chinese investments in the US outgrew US investments in China. Look at Alibaba’s record stock market flotation in New York, which raised US$25 billion, instantly making its chairman Jack Ma into the richest man in China, and turning another ten Alibaba executives into multi-millionaires.

These lucrative connections explain why both the US and Chinese governments want to play down developments in Hong Kong and make sure this doesn’t upset business. As the former secretary of state Hillary Clinton is reported to have said, it is “not a good idea to criticise your banker on human rights.” This is exactly how the US Consulate in Hong Kong reacted, when it issued a statement after the police tear gas attacks of September 28, saying that the US does “not take sides in the discussion of Hong Kong’s political development.”

For the same reason, Chinese cries of “US meddling” and “colour revolution” usually come from the more bellicose sections of the state-controlled media such as the Global Times, although on occasion also from its parent newspaper People’s Daily, but rarely come directly from the mouths of the top leadership. This is the role of these publications, which then allow government spokesmen to sound ‘reasonable’ by comparison.

Friendship with US ‘neo-cons’

It is true that several figures in the pan democratic elite have connections with right-wing politicians in the US and other countries. Recently it was revealed that former (unelected) British governor Chris Patten offered prior to the handover to fix British citizenship for Next Media boss Jimmy Lai Chee-ying (something Patten’s government refused to 100,000s of ordinary Hong Kongers). Lai, whose newspapers criticise the pro-Beijing establishment, is reportedly a “good friend” of leading US ‘neo-conservative’ Paul Wolfowitz, the architect of the disastrous 2003 invasion of Iraq. We can thank Wolfowitz for the emergence of terror group IS.

Lai’s political advisor Mark Simon was a leading figure in the Hong Kong branch of Republicans Abroad and campaigned for George W Bush. Another prominent US ‘neo-conservative’ Ellen Bork claims friendship with Martin Lee Chu-ming, the former Democratic Party leader. The role of the National Endowment for Democracy (NED) has also attracted attention in the Chinese media. This is a right-wing think-tank funded by the US government, which dispersed US$755,000 in Hong Kong in 2012, and US$695,000 in 2013, in funding to various NGOs.

Socialists are not at all surprised by the political links between leading Hong Kong pan democrats and representatives of undemocratic American capitalism. But the ‘umbrella revolution’ did not break out on the initiative of these leaders, it happened despite them! This shows the political contradictions of the pan democrats, whose democracy perspective is rooted in free market capitalism, and who consequently stand for compromise and step-by-step reforms, despite this approach being tested over more than 30 years and producing only failure. The Chinese dictatorship has powerful friends in corporate boardrooms around the world who – like Hong Kong’s tycoons – subscribe to the CCP line that democracy is bad for China.

The pan democratic leaders and their US friends fear that mass struggle against the dictatorship will not stop at demanding democratic freedoms but also want far-reaching social change that could pose a threat to capitalism. This is shown by the ‘umbrella revolution’ – which these leaders neither foresaw nor wanted.

Rather than inciting revolution, the ‘US friends’ of pan democratic leaders seem to have discouraged mass protests. We see this in the neutral declaration of the US Consulate, but also in the rumours that Wolfowitz, when he famously met Jimmy Lai on a yacht in Sai Kung earlier this year, urged postponement of the ‘Occupy Central’ protests (which, whether true or not, is what happened).

Such a position is entirely consistent with US policy towards Hong Kong. In 2010, when five legislators resigned to trigger a ‘de facto referendum’ for universal suffrage, US Consular representatives met with leaders of the League of Social Democrats (LSD) and urged them to avoid a sharp confrontation with the Chinese regime. For his part, Lai’s newspapers did not support the ‘referendum’ tactic in 2010 and instead backed the compromise wing of the pan democrats who later struck a completely worthless deal with the CCP over electoral reform. Among those taking part in the ‘negotiations’ with the dictatorship at that time was Chan Kin-man, now a leader of the largely sidelined ‘Occupy Central’ movement.

US ‘pivot to Asia’

The conspiracy theorists who support the CCP dictatorship and dismiss democratic demands in Hong Kong as a US plot, and this includes a layer of the ex-Stalinist left internationally, point to the US ‘pivot to Asia’ to prove their case (see our critique of the ‘pivot’). But while there is no doubt that the Obama administration is attempting to construct new military and economic alliances across Asia to contain China’s economic rise, this does not mean they are looking for immediate conflict with Beijing over Hong Kong. The idea that the US capitalist class stands for ‘liberal democratic’ regime change in China is false. US policy seeks to contain China, but still prefers to deal with the current dictatorship – which stands for profit-making ‘stability’ – rather than the unknown quantities that could replace it.

Especially at this point in time with an acute crisis in Iraq and Syria, where IS controls around one-third of both countries, and the obvious failure of the US-led bombing campaign to check its advance, Washington wishes to avoid further strains in its dealings with China. It also does not want to provide further impetus to the Chinese regime’s budding alliance with Putin’s Russia. As the Wall Street Journal (September 29, 2014) pointed out, “With a number of other geopolitical issues at stake, the [US] administration is expected to tread carefully in its diplomatic prodding of Beijing.”

Likewise, and even more so, the crisis-ridden right-wing government in Britain is openly seeking to placate Beijing and avoid a dispute over Hong Kong. The CCP-run media have made a great deal about the UK parliament’s decision to send an investigation team to Hong Kong – in reality a meaningless gesture. But when China’s Premier Li Keqiang visited Britain in June, the Prime Minister David Cameron had one major concern – to secure £40 billion (HK$222 billion) worth of Chinese investments in energy, railways and banking. London had already assured the Chinese delegation there would be no ‘human rights lectures’ or repeats of Cameron’s 2012 meeting with the Dalai Lama, for which Beijing demanded – and got – an apology.

Pro-democracy politicians Anson Chan Fang On-sang and Martin Lee Chu-ming also visited Britain in the summer in a failed attempt to win support – at best purely verbal – from British capitalist politicians. The most telling part of this visit was that Cameron declined a meeting with the Hong Kong duo. Cameron has maintained a policy of complete silence having, “subcontracted the Hong Kong question to his deputy, Nick Clegg,” according to the Wall Street Journal (October 2, 2014). Clegg is the leader of a minor party that faces electoral destruction at the next election. He therefore will use any opportunity to get publicity, which is of little help for the democracy struggle in Hong Kong.

Socialists completely reject the position of the pan democratic leaders that the democracy struggle should seek support from foreign governments and business leaders. The masses in Hong Kong must win allies outside its borders, but these are the workers and youth of other countries including and especially China, where the struggle against the CCP dictatorship will be decided. It is worth noting too how Hong Kong’s nativist groups have made complete asses of themselves waving the British colonial flag – the emblem of a government and capitalist class that is not remotely interested in their protests because it is too busy doing business with Beijing.