In the end only eight pro-government lawmakers voted for the government’s deeply unpopular electoral reform – branded as “fake democracy” – in Hong Kong’s legislature, the ‘Legco’, which voted on the package on Thursday 18 June.

The electoral reform, which sought to replace today’s elite-only selection of the Chief Executive with an Iran-style controlled election that widened the franchise to all voters but only for handpicked candidates, was defeated by 28 votes to 8. The defeat was expected but not in such crushing terms, which was due to a ‘miscommunication’ by pro-government lawmakers who staged a walkout believing this could delay the vote while they waited for an additional supporter to arrive.

Whether due to faulty math or a misunderstanding of Legco procedures, the walkout backfired spectacularly, leaving a quorum of 37 lawmakers (including the Speaker who does not vote) inside the chamber and meaning that the vote went ahead without the government’s most loyal supporters. There is great irony in this outcome given the intense propaganda from the same pro-government politicians over recent months, accusing the pan democrats – Hong Kong’s liberal democratic opposition – of wanting to sabotage Hong Kong’s future and bearing responsibility for blocking ‘universal suffrage’. While the pan-democrats had sufficient numbers (27 of 70 seats) to block the legislation which requires a two-thirds majority, the slapstick antics of the pro-government camp put the result beyond any doubt.

This incompetent performance from its local representatives has infuriated the Chinese regime and by stealing all the attention has complicated its planned propaganda offensive against the pan-democrats. Public splits and rancour have erupted within Hong Kong’s pro-government camp and one prominent pro-Beijing politician who took part in the walkout, Regina Ip Lau Suk-yee of the New People’s Party, burst into tears during a radio interview. A troupe of pro-Beijing lawmakers reportedly visited the Central Government Liaison Office, the headquarters of the Chinese regime in Hong Kong, after the botched vote in order to offer apologies and perhaps to receive a dressing down.

There was widespread relief and celebration within the city’s pro-democracy movement after the vote, which killed off a proposal that served as the trigger for last year’s marathon 79-day ‘Umbrella Revolution’ of mass street protests and occupations. The question now is what strategy is needed to take the struggle forward? The collapse of the government’s reform plan is to be welcomed as a setback for the Chinese dictatorship. It wants to impose a fake election system upon Hong Kong in order to carry out further repressive measures in order to erode the partial democratic rights that have been won, and to increase Beijing’s control. This plan has been dealt a blow. But clearly, this cannot be proclaimed as a victory for the democratic struggle which has not advanced and which can only succeed by ending the rule of the one-party dictatorship. After the Legco vote the real struggle must begin. 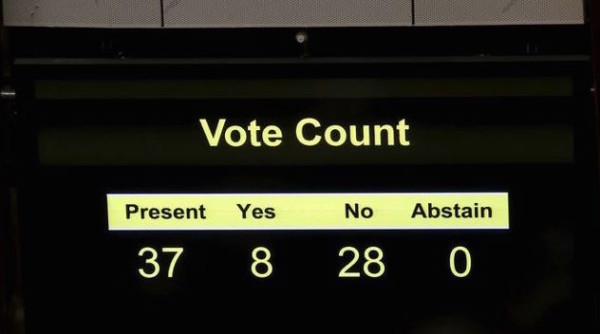 The pan-democrats will use this reverse for Beijing to try to rebuild their shaken support especially with next year’s Legco elections in view. In recent years these parties have been widely questioned for espousing a gradual compromise approach, believing it to be the only way to extract democratic concessions from Beijing. In fact, their cautious approach has failed to achieve real progress in more than 30 years (under both British and Chinese rule), as shown by the fact that Hong Kong’s undemocratic political system, openly dominated by a billionaire elite, remains fundamentally unchanged. Mass frustration with the pan-democrats’ lack of  fight was a major factor in the eruption of last year’s protests.

Unfortunately, there are few signs of a rethink by the ‘moderates’ who lead the pan-democratic camp. Leader of the Democratic Party, Emily Lau Wai-hing, said the Legco vote “sends a clear message to the central government and the international community that a new reform should be launched immediately.” This is despite Beijing making it clear it will not contemplate democratic elections (because this could trigger a chain reaction in mainland China threatening the dictatorship’s grip on power) and that the now rejected reform is its “final” offer. Yet the ‘moderate’ pan-democrats continue to ‘flog the dead horse’ of reform – despite Hong Kong’s own experience and the lessons of history they still believe a parliamentary democracy can coexist with dictatorship within the same state.

The fact that not a single pan-democratic legislator defected to support the government’s reform (as several did in 2010) showed that these politicians were under extreme pressure from the masses after the Umbrella struggle. They were forced to veto the proposal, but unfortunately are not prepared to change their basic position – of seeking negotiated and rather limited reforms – and thus cannot offer a way forward for the struggle. The danger with their approach is that the pan-democratic leaders will now try to de-mobilise and calm mass anger and the desire for struggle, which they find more and more difficult to control. Lacking any ideas other than appealing to the dictatorship to ‘relaunch reform’  these parties will undoubtedly try to shift the focus onto coming elections at the expense of new initiatives for mass struggle – when in fact the electoral struggle should be subordinated to the needs of rebuilding a mass movement.

This shows the need for a new fighting leadership and organisations based on grassroots struggle to take the democracy struggle forward. The most important ingredient in this is the need for a working class party with a socialist programme linking revolutionary democratic demands against autocracy with the need to abolish a billionaire-ruled economic system that leads to increasing poverty and injustice. Such a movement needs to build democratic grassroots action committees – the lack of democratic control was the main weakness of the Umbrella protests which meant the movement could not spread and escalate to other more effective forms of collective mass resistance such as strikes and a political general strike. Crucially, the struggle must also be actively exported beyond Hong Kong’s borders to have any chance of success, by appealing for mass solidarity action in China and internationally.