The standoff between the Greek left-led government of SYRIZA and the country’s international creditors led by the EU and IMF is reaching a climax. For five years the creditor institutions, who represent international finance capital, have put the Greek people on a starvation diet of severe austerity polices, driving down living standards to ‘Asian’ levels. SYRIZA stormed to power in January’s elections on a programme to resist further economic blackmail and put a stop to austerity. But unfortunately rather than mobilise the masses for struggle around socialist policies, to break the power of the bankers and big capitalists, SYRIZA’s leaders have put their hopes in negotiations with the EU to achieve a compromise deal.

By late June, SYRIZA had offered a new ‘reform proposal’ in order to unlock financing frozen by the creditors that included cuts in already downsized pensions, increases in sales tax and other austerity measures. This represents a form of ‘austerity lite’ with the economic burdens still falling on the long-suffering Greek masses. During marathon talks, however, the EU leaders and financiers rejected this offer and demanded even bigger cuts from SYRIZA. This prompted Greek Prime Minister Alexis Tsipras to call a referendum to be held on 5 July. Socialist Action’s sister party in Greece, Xekinima, is calling for a ‘No’ vote in the referendum to reject austerity, assuming it goes ahead and is not overtaken by new twists in what has become a complex game of international brinkmanship that could see Greece expelled from the single currency (euro).

The following article, first published on 10 June 2015, explains the stark choices facing the government and the Greek left – to adopt a fighting socialist alternative or to become the prisoner of the EU/IMF and its never-ending austerity programme.

Is ‘Grexit’ looming? Recently Greece has appeared to move a step closer to defaulting on its debt and exiting from the Eurozone. Athens has been trying to secure an agreement from the European Union, European Central Bank and International Monetary Fund – the Troika (now also known as the ‘Institutions’) – for access to more than €7 billion in bailout funds.

With Greece’s money running out, it needs to secure funds by the end of June to avoid defaulting. But its creditors have put draconian conditions (more austerity) on any deal, which the left Greek Syriza government has, so far, refused to accept.

The Troika’s haughty neo-colonial attitude provoked the Greek government to declare it would not meet a debt repayment of €300 million due on 4 June. Instead it would ‘bundle’ the debt repayment, along with other payments due to the IMF, and pay the debt later in the month.

Indicating the deep tensions between the Troika and Greek government, the European Commission president, Jean-Claude Juncker, responded with a furious verbal attack against Tsipras at the start of the G7 summit in Germany.

Tsipras is under immense pressure from ruling elites and international ‘markets’ to strike a deal with the Troika while, at the same time, he faces angry opposition to yet more cuts from the Greek working class and the left inside Syriza.

One third of Greeks already officially live below the poverty line (in reality more than 50%) and the average Greek household has lost 40% of its income since 2010.

Tsipras and the Troika argue over how big a budget surplus Greece should run. But taking into account the interest payments, the country’s debts are unpayable. Its debt is 175% of national income (GDP).

Yet the deluded neo-liberal ideologues at the EU institutions insist the Greek economy can grow by almost 3.5% on average in each of the next five years, bringing the debt ratio down to 120%.

At this point, it is unconvincingly argued, Greece might be able to turn to the financial markets again to raise money, despite the fact that the economy will be ravaged once more by further Troika-imposed cuts.

The BBC’s Robert Peston estimates that even on the basis of the Troika’s absurd growth forecasts it would take fifty years of austerity for Greek public debt to fall to ‘sustainable’ levels.

Even the IMF, seeing how ludicrous this position is, has reportedly in the past pressured for a partial write-off of Greece’s debt.

This was strongly opposed by the Eurozone powers, Germany, in particular, who believe debt relief would result in other indebted countries, like Portugal, Spain and Ireland, demanding similar treatment.

At the G7 summit, US President Obama called for ‘compromise’ between the EU and Greece, albeit with Athens taking “some tough political choices”. Washington is concerned that Greece’s exit from the Eurozone would have negative knock-on effects on the anaemic world economy.

The White House (but also Germany and other EU powers) also fears that the Putin regime in Russia would use the opportunity to step in with financial aid for Greece and use its influence on the NATO member to undermine the Western powers. 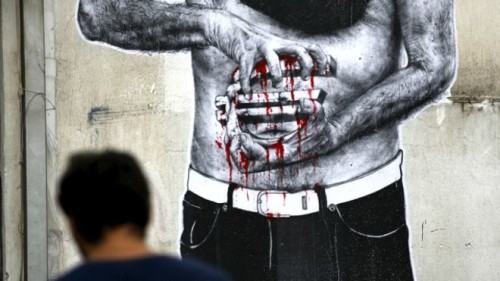 A ‘Grexit’ is a real possibility, either by ‘accident’ or design. Under immense pressure from the long suffering Greek working class, the Syriza government could decide it cannot accept the Troika’s new dictates and find itself thrown out of the Eurozone.

Anticipating this possibility, Moody’s bond credit rating agency announced a €5 billion loss of deposits from Greek banks in May, and expects a run on the banks will lead to capital controls.

Grexit would see an end to externally-imposed austerity and allow the Greek government to devalue and write off a large chunk of its debt. Exports would be cheaper. But imports would cost more, and this would have a negative effect on personal savings and living conditions.

On the basis of capitalism, Grexit on its own would not solve any of the fundamental problems of the Greek economy and society

While the Eurozone powers believe they have prepared enough so that a Grexit would cause less economic storms than a few years ago, they are worried about the possible political consequences: ‘European integration’ and the austerity orthodoxy would face serious setbacks.

Unless Tsipras caves in completely to the Troika, with disastrous consequences for Syriza, it is still possible that Greece and the Troika will reach another ‘fudged’ deal.

This may involve Greece’s creditors scaling down their austerity demands and giving Athens the money to meet debt repayments, with the added possibility of some debt ‘forgiveness’.

Tsipras has threatened to take such a deal to a referendum or to call elections. But for Greek workers and the poor, there can be no fudge over the calamitous effect of any more cuts.

Under the failed capitalist system, in or out of the Eurozone, the great majority of Greek people face endless hardship.

Xekinima (CWI Greece) calls for Syriza to be consistent with its pre-election anti-cuts pledges, to break with austerity and to adopt a socialist programme.

This includes refusal to pay the debt; controls on capital flows and for the state monopoly of foreign trade; the nationalisation of the banks and the commanding heights of the economy, under democratic workers’ control and management; reversal of austerity and jobs for all, with a living wage, and free, quality health, education and welfare.

Planning the economy for the needs of the people and not the profits of the capitalists – the socialist re-organisation of society – would see an end to economic crises, poverty, joblessness and forced emigration.

To achieve this it is essential to build independent class politics, inside and outside of Syriza. This means the creation of popular assemblies and action committees of the rank and file in workplaces and communities.