Hong Kong goes to the polls on 22 November to elect over 400 councillors in 18 District Councils.  Socialist Action (社會主義行動) is standing Sally Tang Mei-ching in the Ha Pak Tin ward of Sham Shui Po district. Sally’s candidature is part of an electoral alliance with the League of Social Democrats (LSD) who are standing candidates in five other wards.

What do you think is the most important issue of this election?

My aim is to use this election as a platform to launch struggles together with the residents to take back control over public funds and political power. I’m a socialist, and believe we cannot get a fair deal for working people, the elderly, the youth, while the economy is controlled by a few super-rich tycoons.

There is a serious economic crisis in China, so a serious economic tsunami is heading toward us, which could also have a devastating effect on Hong Kong. The government and the pro-establishment forces are now covering up this fact, and are too optimistic. But if the economic crisis hits us maybe next year, the government and capitalists will cut wages and attack the public sector, repeating what they did in 1998, 2003 and 2008. The masses should start to organise to fight against these attacks – this will be the main message I would like to bring out through my election campaign. 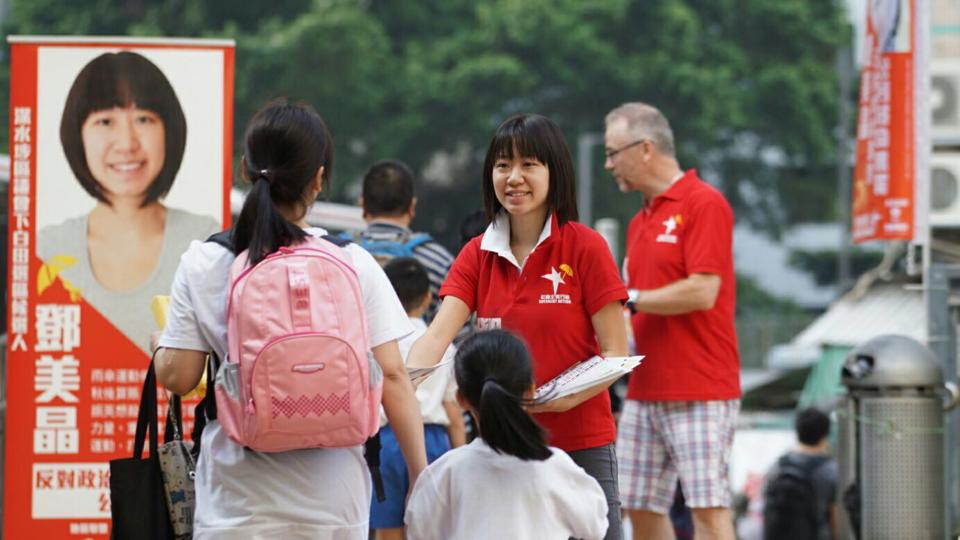 The pro-government forces are rich in resources, how are you going to compete with them?

There are a lot of political parties representing the elites, tycoons and the CCP (Chinese dictatorship). They are rich and powerful, using minor “cakes and gifts” to win support. One of my missions in the election is to expose their so-called “serving the grassroots”, which is in fact selling out the interests of the grassroots by vetoing livelihood issues in the district councils, while at the same time passing bills to transfer billions of dollars into the pockets of the property developers. We don’t receive any money from the CCP and we don’t give out ‘mooncakes’ – but we do engage in struggles to force the government to give us back our deserved rights and benefits!

You were active in the Umbrella Movement and you have a yellow umbrella symbol on all your election material. Why is this important in these elections?

The ‘Umbrella Revolution’ has changed Hong Kong. The yellow umbrella represents struggle, against dictatorship and against police violence. I am raising in this election that we need to build a fighting democratic movement against the political repression by the CY Leung government. We need to turn the democratic movement into a mass force, which has to be democratically controlled internally by its mass participants, instead of being dictated by a handful of media-picked politicians or leaders. Therefore, we need to learn from the past mistakes, weaknesses and lessons of the movements, and rebuild an unstoppable democratic struggle.

You have pledged that you will only take one-third of a District Councillor’s wage, why is that?

The salaries of the top officials in Hong Kong are incredibly high, far more than their counterparts in other countries. The annual salary of CY Leung is more than four million dollars, even more than President Obama of the United States! The principal officials’ salaries are more than $300,000 a month, yet this did not stop corruption scandals. Even Legislative Council members have a monthly salary of $80,000! The top officials and councillors are living in a different world to the ordinary masses of Hong Kong, they are sated and don’t seek change, they have a vested interest in the current system.

The median monthly income of wage earners in Hong Kong is $14,800, which means that the salary of a District Councillor is already double that of an average employee. District Councillors will receive a pay rise of 15 percent starting next year, to around $30,000, but the average wage increase for ordinary workers is just 3-5 percent! The decision to increase the salary and the level of pay rise should be decided democratically by the people. Thus, I pledge to take only one-third of the District Councillor’s wage, in other words around $10,000, the rest will all go towards the struggle.

Sham Shui Po is the poorest district in Hong Kong – what policies are needed to change the situation?

Firstly, we need a universal pension system now, to end the poverty of the elderly, so that pensioners have the money to see the doctor and live in dignity. Secondly, the hourly minimum wage should be increased to $45 immediately, to tackle the problem of the working poor. Thirdly, there are more than 20,000 units of subdivided flats in Hong Kong, and Sham Shui Po hosts the highest number of all districts. I call for immediate rent control and the building of at least 50,000 units of public housing every year, to let the more than 200,000 households currently on the waiting list move into public housing as soon as possible.

The District Councils are very bureaucratic and with only limited powers, how can you bring forth change if you are elected?

The District Councils are filled with pro-government politicians and fake ‘independents’. If I as a grassroots fighter am elected into the council chamber, I will be a whistle-blower on behalf of the people on the secret conspiracies in the District Council, investigating how public funds are being used and whether there is any abuse in the allocation of government projects. I will mobilise residents to protest when the District Council meets.
The rich and powerful have pro-establishment parties to defend their interests, but the majority of the population has no political weapon – an independent mass workers’ party. One of the aims of my campaign is to help create the conditions for building such a party.

Your opponent Yan Kai-wing represents the Business and Professionals Alliance (BPA) and Kowloon West New Dynamic (KWND). Can you tell us three things that you and he differ on?

The BPA and KWND are the parties of the infamous Priscilla Leung Mei-fun. The BPA is the second largest pro-government party in Hong Kong, second to the DAB [Democratic Alliance for the Betterment of Hong Kong]. First, he voted in the District Council in support of the fake election system proposed under the 31 August, 2014, NPC [Beijing’s National People’s Congress] ruling. Second, his party, BPA, vetoed the proposed universal pension system and standard working hours in the Legislative Council. Third, the BPA supports property hegemony, and voted against the proposal to renationalise the Link property group in the Legislative Council. 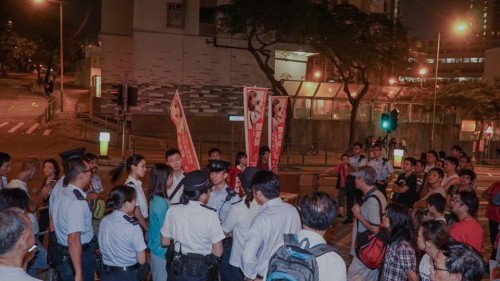 Despite big democracy protests in Hong Kong it appears as if the CCP is unbeatable. What do you think is the way forward?

In the past decades, the moderate pan-democrats tried to engage in negotiations with the CCP, hoping that it will grant democratic rights, but this policy has been proved to be an utter failure. The CCP dictatorship is not granting democracy to Hong Kong, because it fears that it will trigger a domino effect in China. To fight for democracy, the mass movement has to spread to mainland China and to link up with the Chinese masses to overthrow the CCP dictatorship. That is the only way we can win.

How is your election campaign? How will you promote your ideas?

This is a very heated election fight, the campaign is currently going well. We are out every day, giving out leaflets, doing door-knocking. We will organise protests and explain the need to get organised.

I will challenge my opponent Yan of the BPA to a public debate to let everyone know his real political position. I will ask him why he opposes a universal pension system and defends the blood-sucking Mandatory Provident Fund (MPF). Why is he against standard working hours legislation? This District Council election is a hard fight, a battle between the rich and the poor, the dictators against the democratic forces. We say down with the dictatorship and the tycoons; our only way out is to struggle. Please vote for me, and send a grassroots fighter into the council!