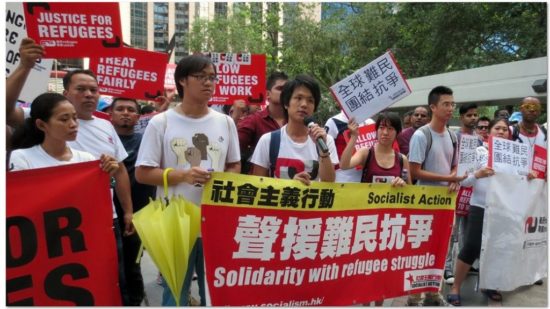 Hong Kong’s small refugee community is afraid. Anti-refugee sentiment is being whipped up by those in power – government, the media and defenders of big business interests. They present a completely false idea of “fake refugees”, ignoring the dangerous world we live in, with religious, ethnic and political persecution that forces people to flee their homes.

Newspapers, most notably Oriental Daily, are consciously stirring up racist attitudes towards refugees. The term “fake refugees” appeared in 400 articles in Chinese language newspapers in February this year compared to just 12 times in the whole of 2014.

That this is racism is shown by the way South Asians are especially scapegoated even though they are mostly Hong Kong residents, not refugees. There are eight times as many Australians in Hong Kong as there are refugees, and Australians far outnumber South Asians, but nobody proposes to limit the number of Australians!

The Liberal Party put up banners blaming refugees for an increase in crime. This was dismissed as untrue by Fok Lok-sang, Yuen Long district police commander, who produced figures totally disproving the Liberals’ claims.

The establishment wants to create mass fear over huge numbers of refugees arriving. In reality, Hong Kong has taken in very few refugees – around 11,000. This compares with 2.7 million refugees in Turkey and 1.5 million in Pakistan. Hong Kong grants asylum to even fewer, the lowest number in the world.

Racist ideas (to discriminate against certain groups based on their colour or ethnicity) are always a tool of oppressive regimes to divide and rule over the oppressed.

After three years of disastrous misrule arousing mass hatred, CY Leung has seized upon the ‘anti-refugee card’ in a bid to extend his grip on power. His policy address in January deliberately injected this issue into Hong Kong’s political power struggle ahead of the Legco elections. This is to distract from the real issues of collapsing public services, unaffordable housing and lack of good jobs.

Following Leung’s lead the pro-government parties have formed into a political lynch mob that compete against each other to be the most rabid anti-refugee voice. Regina Ip Lau Suk-yee and Priscilla Leung Mei-fun are first among the mad dogs. They demand all asylum seekers including children be locked away in a camp.

These are the same politicians who want to criminalise protest and introduce Article 23 to limit basic democratic rights. There is a clear link between attacking refugees and wanting to strengthen the dictatorial powers of the state.

CY Leung has even threatened to withdraw from the UN Convention Against Torture. Outside the convention, Hong Kong would be in the company of a few ‘rogue states’ like North Korea and Zimbabwe that systematically violate human rights.

Don’t be fooled by the establishment’s racist lies! United struggle by all oppressed and grassroots people is needed to defeat the current system and achieve real change. 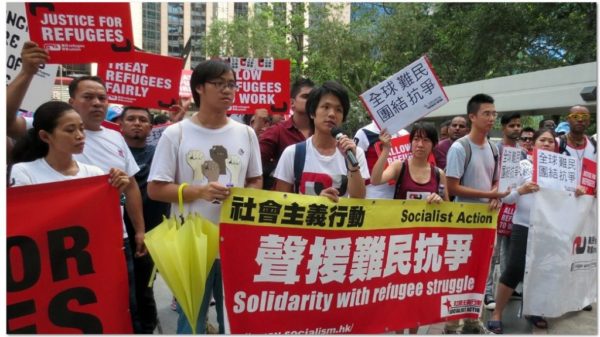