Phoney elections have not brought stability

A tense situation has developed in Kazakhstan. Protests have erupted against the Nazarbayev government only weeks after his ruling party ‘won’ rigged parliamentary elections.

The Azzatyq website reports: “Despite prohibitions against unsanctioned rallies, since April 24 Kazakhstan has seen demonstrations against the proposed privatisation of land in the major cities of the east (Astana and Almaty ), in oil towns in the west (Atyrau and Aktau), in towns in the north (Aktobe and Semey), and in the south (Shymkent).”

On the day designated to celebrate National Unity – May 1 – there were also demonstrations in Zhanaozen … and in Kyzylorda, an agricultural region in south-central Kazakhstan. See this video footage on Youtube.

shows police in Kyzylorda charging unarmed demonstrators in scenes reminiscent of the massacre of striking oil-workers in Zhanaozen in 2011. As yet there are no casualties and, if anything, the movement of opposition to Nazarbayev is expanding.

Protesters will have to organise meticulously the physical defence of their demonstrations. To develop a movement that can really challenge the newly voted-in dictator, representatives elected from every gathering will need to link up and coordinate on a regional and national level.

Only tame parties and trade unions are allowed by the state to exist and most attempts by workers and young people to organise are met with vicious repression, including imprisonment. The urgent task is therefore to build unofficial struggle organisations and to hammer out a programme of political opposition.

Saying ‘no’ to privatisation of land and industry is key in this situation, as is raising the need for genuine democracy of workers and young people, elected in the neighbourhoods, the factories, the schools and other public workplaces. In spite of the relatively recent experience in Kazakhstan, of life under the jackboot of Stalinist repression and bureaucratic control, many in Kazakhstan still see the ideas of socialism as valid as a way to organise economic and social development in the interests of the overwhelming majority. A party based on those basic ideals is vitally necessary.

Below is an article about the recent election and its aftermath.

Kazakhstan: After fake elections
Dress rehearsal for a crash 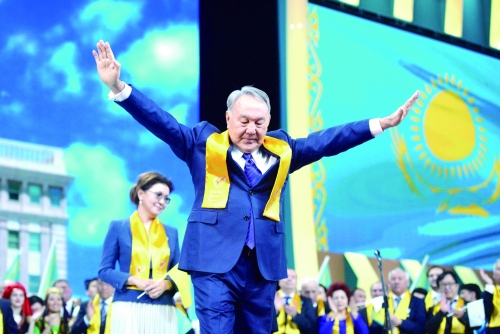 The 20th of March parliamentary elections in Kazakhstan were officially called the start of the ‘reform of the government’. Nazarbayev promised to redistribute the power concentrated in his hands. These elections were, indeed, out of the ordinary, according to past practice. But it is not worth praising the democratic aspirations of the regime — for the majority, living from paycheck to paycheck, the elections were business as usual and drove the country into an even deeper social and political crisis.

In the Majlis, the lower house of the Kazakhstan parliament, the usual triumvirate of pro-government parties remained: the President’s ‘Nur-Otan’, the ‘Communist’ Party, there for decorative purposes, and ’Ak-Zhol’, allowing big business to lobby for its interests, but constraining its political ambitions.

From the well-known, more or less oppositional forces, they traditionally tolerated only the National Social Democratic party, but it was kept on a short leash after the announcement by its former leader, Bulat Abilov, that he was leaving politics for business. They gave it a few more percent. For a change, the electoral list was diluted, in practice, with phony, one-day pro-presidential parties, that no-one had heard of. Journalists joked on Twitter: better to let the opposition into the elections and then take it for a ride and cheat it, than to have such tedium and apathy with absolutely nothing to show for it.

But an opposition having an electoral tribune and freedom of agitation is too dangerous for the regime. The liberal ‘Alga!’ has already been destroyed by repression. In elections for local authorities, which took place on the same day, the Electoral Commission struck off more than 300 independent candidates because of “violations” in filling out financial statements. But it is easier to believe that the reason for their removal from the elections was not an incorrectly accounted for kopek, but opposition to the regime. For example, the case of the independent candidate Max Bokaev from Atyrau, with his leftist views and support for the striking oil workers of Zhanaozen and other workers’ protests.

The Renewal of the Ruling Party – the cementing of Bonapartism

Nazarbayev’s regime is a classic example of bourgeois Bonapartism. The bourgeoisie was made to understand that ‘to save its purse, it must not wear the crown’. In this system, workers were given only one choice: to approve or throw out the Bonaparte.

And while the working class does not have any political forces of its own, it serves as a pawn in the game of those who need to get closer to power. It was not surprising how, under orders, the workers of Kazakhstan Railways, voted, when the President promoted the Vice President of the company to the Nur-Otan list. Students for a whole week missed classes and under the vigilant supervision of the administration, rehearsed the victory (celebrations) of the ruling party.

The Nazarbayev regime has demonstrated increasingly over recent years what its stability consists of. After the Zhanozen massacre, it would seem that heads flew in virtually all the stable ‘vertical’ (structures) in Western Kazakhstan, which had become too disloyal.

It is not surprising that the wish of Elbasi – the President, the ‘Father of the Nation’ – was to shake up the cadres of the ruling party and to include those ‘who are needed at the present stage’. In the absence of significant figures to replace Nazarbayev, all they can do is consolidate the existing apparatus and reassure the big bourgeoisie. Indeed, they have plenty of reasons to be worried. Elbasi is not immortal, it is unclear who can guarantee inviolability of ownership and stable conditions for investment and under the windows of the banks, dissatisfied borrowers stand day and night, due to the collapse of the financial system.

Reforming the regime just amounts to Nazarbayev being replaced by a narrow ’Committee’ of loyalists and cronies in whose hands all power will reside. 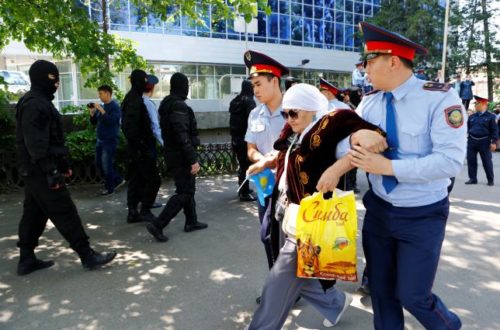 Critical voices are only heard from Western commentators. Human rights organisations and the foreign relations departments of the EU and OSCE are expressing disapproval. But this criticism is not motivated by the struggle against injustice in Kazakhstan, but dissatisfaction at the turn of Kazakhstan to Russian imperialism. And it is not worth believing in the possibility that these institutions can change anything at all. In past years the Nazarbayev regime never criticized Western institutions, in exchange for favourable conditions for selling raw materials. On the other hand, the Russian Duma, has given its full endorsement of the elections and of further “economic, political and military cooperation”.

No alternatives to the present government power exist. The opposition bourgeoisie has been crushed. The economic crisis is more and more perceptible and weighs on the shoulders of workers, state employees, youth and the middle class. Only the religious sects, with whom Nazarbayev decided to fight jointly with the Kremlin, feel comfortable in these conditions.

Nazarbayev’s attempt to consolidate the apparatus will go on, but to leave power would open the road for a fully-fledged political crisis. The ruling party of Mubarak, also had the prefix “people’s democracy”, and it got more than 82% in the elections, but in its political impotence in conditions of crisis and dictatorial rule, the people reacted by burning down its offices all over Egypt.

Kazakhstan workers need to know the lessons of the “Arab Spring”: to get rid of the entire old regime and reactionary forces, they need to set up their own political party, ready to fight for power, and in the name of a workers’ government to carry out the sole, real anti-crisis programme – a socialist one.

An unfortunate and unnecessary departure from ISA

Will there be a Taiwan war?

Cuba: Solidarity with the Cuban people against imperialism and capitalist restoration

An unfortunate and unnecessary departure from ISA

Will there be a Taiwan war?