The only way to defeat dictatorship is revolution

This year on June 4 it will be 27 years since the horrific massacre of workers and youth in Beijing. The 1989 events, when China was on the brink of revolution, hold a crucial relevance for the situation today.

Xi Jinping is cracking down on every possible outlet – real or imagined – for opposition to the dictatorship. This includes a series of illegal overseas abductions. Increased repression, and especially a recent wave of arrests of worker activists and strike organisers are linked to impending attacks on jobs and wages, as part of Xi’s ‘supply side reforms’ – a coded term for mass layoffs of up to six million workers in state industries.

A key lesson from 1989 is that a dictatorial regime can only be defeated by revolution. This is a lesson that many of the leaders of today’s democracy struggle choose to ignore, putting their faith instead in piecemeal reform. In Hong Kong’s case, this false ‘reform’ strategy has been tried over more than 30 years and resulted in complete failure, with Beijing refusing to allow the Hong Kong government to be chosen through open elections. If it cannot succeed in Hong Kong, with its ‘special’ status and history, how could such an approach work in China as a whole? 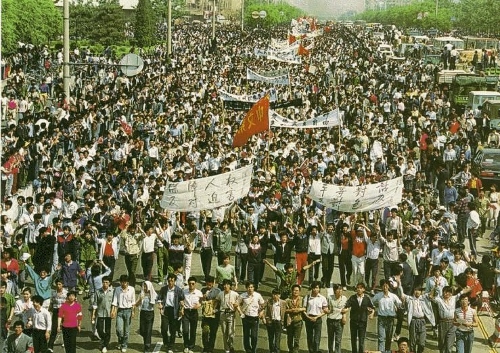 In 1989, facing unprecedented mass protests by students and then workers, the regime of Deng Xiaoping and the so-called Communist Party (CCP) chose to perpetrate a bloodbath. On the night of June 3 the ‘People’s Army’ went on a killing spree that resulted in over 1,000 dead, although the exact numbers may never be known. The government claims 241 were killed, of which 36 were students. But these very low figures form part of a systematic official cover up. The Chinese Red Cross initially said 2,600 had been killed in Beijing, but later retracted this figure. Tens of thousands were arrested and hundreds were executed in a nationwide crackdown after June 4. Deng had used state terror on a huge scale “to make a statement” in the words of then US Ambassador in Beijing, Winston Lord.

The mass democracy protests had already clearly peaked and begun to subside in the capital. The students, who initiated the movement had become physically exhausted but had also run out of ideas for taking the struggle forward. New layers, especially young workers, school students and urban youth, increasingly took over the running of the day-to-day struggle. In May, after the students launched their hunger strike, the movement became noticeably more proletarian. The newly formed Workers’ Autonomous Federation became an important force, especially after the regime declared martial law on May 20.

Deng and his coterie, by that time based upon the most hardline sections of the top CCP leadership, decided to ‘strike hard’ in Beijing as a means to frighten the masses nationwide, where the movement was still gathering momentum. There had been mass protests in more than 100 cities around China. Even after June 4, the movement continued in many cities with railways blocked, mass demonstrations and calls for a general strike. It is important to recognise this as a developing revolution – and not just a protest movement to “make the government listen” as it is often portrayed by the pan-democratic leaders in Hong Kong for example.

It was a revolution in the sense that the masses had shaken off their fear of the dictatorship and could feel their power to change things through collective action. The regime was deeply split and on the verge of shattering. Deng’s decision to unleash maximum repression was also a warning to his opponents inside the CCP.

The masses wanted a new kind of regime – an end to dictatorial rule and corruption, and an alternative to the pro-capitalist reform policies that were enriching a minority at the expense of the majority. But one crucial element was missing in the events of 1989: a clear revolutionary programme and leadership in the shape of a genuine working class socialist party that could guide the struggle forward.

The fate of the mass movement rested on the question: What to do next? A revolution cannot take a time out. The strategy of ‘holding onto the streets’ (or the Square) was not enough. The issue that was posed was whether the old power would be defeated and replaced with a new power, or would re-establish itself by destroying the elements of a new system that this movement represented.

As we explained in our book Tiananmen 1989 – Seven Weeks That Shook the World (chinaworker.info, 2009):

“What the situation demanded was the convening of a genuine people’s assembly, a revolutionary assembly, elected in free elections by the whole population and open to all parties to contest.”

This should have been linked to the call for a general strike, to mobilise the working class which was beginning to organise itself, and popular self-defence committees to win over the rank-and-file soldiers and protect the masses and their new independent organisations. The army was deeply split, so this was fully possible.

It was also necessary to establish workers’ democratic control and management over industry and genuine, democratic, socialist planning to tackle the social crisis caused by the toxic mixture of bureaucratic mismanagement and the re-emergence through Deng’s reforms of capitalist speculation. 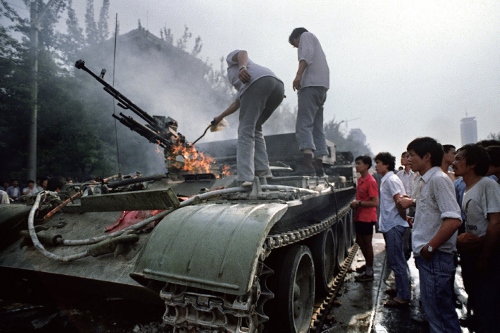 The tragedy of the 1989 movement was that a showdown had become inevitable, but only one side fully understood this. For the masses to become fully conscious of the way ahead, an organised force – a revolutionary party – is needed. It is not enough to rely on spontaneity and improvisation, important as these things are.

Deng’s regime took advantage of the many hesitations of the original student leaders (they wanted to prevent the struggle from going ‘too far’, seeing the movement as a means to exert pressure upon the more reform-minded layers of the CCP bureaucracy rather than to overthrow it).

Singapore’s former dictator Lee Kuan Yew in a 2004 interview expressed his solidarity with Deng’s actions: “If I have to shoot 200,000 students to save China from another 100 years of disorder, so be it.” This grotesque idea – that state terror creates ‘stability’ – is repeated by today’s CCP propaganda to scare the masses from seeking to change the system.

While Lee’s remarks stand out for their bluntness, the truth is that once the direction of the post-1989 Chinese regime – towards capitalism – became clear, most capitalist governments welcomed this and toned down their ‘outrage’ over the repression. The US and European powers imposed sanctions against China after the massacre, but these were soon lifted as their multinational corporations began pouring into China to exploit its cheap non-union labour and pro-business policies.

Today, as in 1989, China faces a serious economic crisis. Splits are also emerging within Xi’s regime. A major rift over economic policy was revealed in a front-page People’s Daily editorial (May 9), in which an “authoritative figure” – possibly Xi himself – warned that China’s future economic trend will be “L-shaped”. The mystery figure said that by continuing to rely on debt to fuel growth, government policies could “trigger systemic financial crisis”. The editorial hit like a bomb blast, with confidence levels in the regime’s economic management already low.

Beijing seems to be trapped in a vicious cycle, needing to create new bubbles – most recently in housing and commodities – to cushion economic growth as previous bubbles like the stock market have gone into meltdown. At the same time, we have seen greater numbers of workers, youth and also middle-class Chinese taking to the streets to protest against government policies. Workers’ strikes have surged in the past 12 months to more than double the level a year earlier.

The unfolding mass struggles in China must learn the crucial lessons of history, and not least from the missed revolution of 1989. We must learn in order to rebuild the struggle, but next time insuring the working class is equipped with the programme and organisation necessary to succeed.