HONG KONG: For a political revolution to achieve democracy and build a working class political alternative

Socialist Action’s chairperson Sally Tang Mei-ching is considering standing in the Legislative Council by-election in West Kowloon to be held later this year. The byelection has been caused by the government’s controversial disqualification of two localist legislators.

I am actively considering running for the Legislative Council in the West Kowloon by-election. Hong Kong needs a left-wing force to counter the Chinese dictatorship (CCP) and provide the backbone for rebuilding the mass democracy struggle. More candidates may be banned from standing for elections in the future as the government takes an increasingly hardline stand. Therefore, unless a powerful mass fight back is launched, this may be the last opportunity to call for the end of the CCP’s dictatorship in a Legislative Council election. It’s a chance that must be grasped!

Chief Executive Leung Chun-ying has been dismissed by Beijing, representing a late victory for the Umbrella Revolution. That movement changed the mood in society and made his continued rule impossible for Beijing, which wants to continue his hardline policies but under a different face. Still, this proves that mass struggle is the only way to defeat the dictatorship.

If I stand I will advocate struggle to the end, refusing to enter any political deals with the undemocratic establishment. Unlike sections of the pan-democrats, I have no illusions in any of the establishment candidates in the coming Chief Executive contest, whether CY’s “understudy” Carrie Lam Cheng Yuet-ngor or the “liberal autocrat” John Tsang Chun-wah. All wings of the establishment stand for attacks on the working class and must be fought.

The CCP dictatorship and the Hong Kong Government are attempting to purge six elected legislators in order to overturn the results of the September Legislative Council election, turning hundreds of thousands of ballot papers into waste paper. This is nothing else than a bloodless coup. Socialist Action opposes the racism and right-wing ideology of the localist group Youngspiration, but the attack on elected legislators initiated by Leung Chun-ying’s government aims to muzzle the entire opposition in the Legislative Council and turn it into a rubber stamp like China’s National People’s Congress.

From the Provisional Legislative Council in 1997, the dissolution of the Municipal Councils to the purge of the Legislative Council today, every time the coup is widened. Only the mass resistance of Hong Kong people over many years has stopped the establishment going further.

How to achieve democracy?

Our differences with the pan-democratic leaders are because they believe democracy can be won through compromises with the dictatorship rather than the road of mass struggle. While they chase after an imaginary “gradual reform” they do their utmost to limit and contain mass struggle and balk at calling for the necessary measures to win real democracy. From South Korea to South Africa, democratic rights have been won by mass strikes and an offensive struggle of grassroots workers and youth. These were revolutionary movements that shook the old dictatorships to the ground. This is the only way to win, as shown by all history.

On the other hand, the localist movements cannot offer a way forward for the masses either. Localism’s call for “heroic struggle” is an empty slogan. When the two Youngspiration legislators were purged, the localist movement was paralysed and unable to mobilise mass pressure to defend their seats. Furthermore, these localist groups’ social and economic policies are often identical with the anti-working class policies of the establishment – they oppose crucial anti-poverty measures like universal retirement protection, rent control and additional public housing. Youngspiration were exposed as fake “umbrella soldiers” who played no real role in the 2014 movement. Sally Tang was active throughout the Umbrella Movement and was assaulted by blue ribbon thugs during the Mong Kok occupation. In election campaigns she uses the yellow umbrella as her symbol. 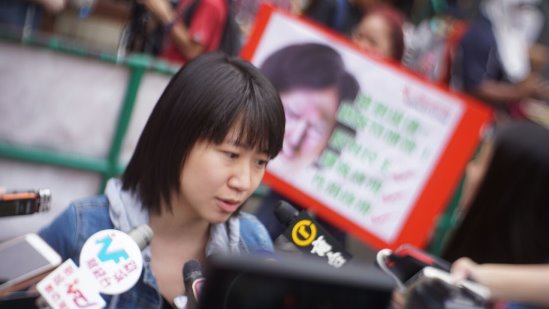 In the United States the voters discontent with the political establishment and its main spokeswoman Hillary Clinton, because there was no left-wing candidate, opened the way for Trump. Trump represents right-wing reaction posing under an “anti-establishment” cover, but as his construction of a government of billionaires shows, he is the sworn enemy of working people and the poor. In order to prevent a similar disaster in Hong Kong it is imperative to build an anti-authoritarian political force based on the grassroots working class. It is for this aim that I am considering standing in election.

I stand for a clear left-wing platform, including the immediate abolition of the Legislative Council functional constituencies and small-circle election system, lowering of the voting age to 16, cutting the wages of legislators and senior government officials. As a legislator I would only accept an average Hong Kong workers’ wage. I stand for the immediate implementation of universal suffrage, increasing the minimum wage to HK$45 per hour, a 40-hour standard working week. No more white elephant projects – the money should be spent instead on public services and a big expansion of public housing. I stand for public ownership and democratic control of the major companies.

[Sally Tang Mei-ching has been active in social movements since 2010, including the feminist movement, refugee rights, and the democratic movement. She was fought a legal case against MTR hegemony and participated in two Sham Shui Po District Council elections: 2011 (Un Chau) and 2015 (Pak Tin). She significantly cut the vote of her establishment opponent in 2015, winning 33% of the votes – an increase in the opposition vote of 28% from previous election.]