It is six years since the Fukushima nuclear disaster. On 11 March 2011, ‘311’, a devastating earthquake and series of tsunamis destroyed the cooling systems at the Fukushima power plant, one of 50 nuclear plants in the earthquake prone country. Three of the plant’s reactors were sent into meltdown and the result was the world’s second worst nuclear disaster. The cleanup process will take decades and in December the Japanese trade ministry put the total cost of the Fukushima disaster at 21.5 trillion yen (US$187 billion).

Six years on the crippled plant is still highly radioactive and holds vast amounts of toxic water and debris. Around 600 tons of toxic fuel and contaminated water has leaked into the ocean. The amount of radiation released into the Pacific is more than from all US nuclear weapons tests in Pacific Ocean islands. 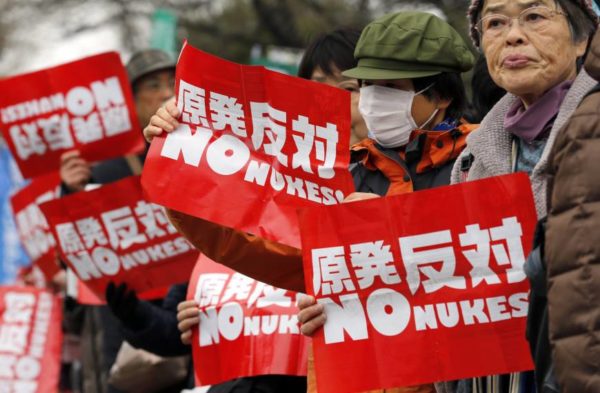 Robots sent into one of Fukushima’s three disabled reactors in February measured radiation levels at 650 Sieverts per hour. That would kill a human in two minutes. Even the special ‘scorpion’ robots designed to withstand high radiation levels have been dying much faster than their designers expected. This is the latest technical setback to the cleanup at Fukushima, which has been marred by bureaucratic bungling and scientific miscalculation on a gigantic scale.

People, not machines, do most of the decontamination work around Fukushima with over 45,000 low-paid contract workers involved. Mostly, these workers are recruited by organised crime syndicates, as this was the only ‘solution’ the government and Fukushima’s owner Tepco could turn to.

Over 160,000 people were evacuated from the area around Fukushima after the disaster, leaving ghost towns, an apocalyptic landscape, toxic farmland and a local economic crisis. Now the right wing government of Shinzo Abe, who is pro-nuclear, is using financial pressure to try to get the ‘nuclear refugees’ to return by cancelling the subsidies they receive for housing and relocation costs. Greenpeace says the level of radiation for those sent back into the evacuation zone is equivalent to having a chest X-ray every week.

Three of Japan’s 50 nuclear plants, which were all shut down after ‘311’, have been restarted. Abe’s nuclear policies fly in the face of public opinion and a wave of anti-nuclear protests. A poll in Asahi Shimbun newspaper last October showed 57 percent against and only 29 percent in favour of resuming nuclear power.

From the very start the government has underestimated the crisis, dragged its feet, and engaged in a cover up over safety concerns. Abe’s new secrecy law and a media crackdown point to even less transparency in future. Japan’s terrifying experience holds vital lessons for building a fighting alternative to the pro-nuke capitalist establishment in Japan and globally.

On March 11, more than 20,000 will join anti-nuclear demonstrations in Taiwan, the first major demonstrations since Tsai Ing-wen’s DDP government came to power. The CWI (International Socialist Forward) is mobilising to join these protests calling for a ban on nuclear power and a socialist alternative to the energy crisis of capitalism.