Hong Kong’s government has for the first time moved to ban a political party, as the Beijing-driven political crackdown in the territory widens. On 17 July, the Security Bureau served notice it will use the Societies Ordinance – a relic of British colonial rule – to ban the pro-independence Hong Kong National Party (HKNP).

The HKNP is a very small and largely irrelevant racist grouping, which has clearly been selected by the government as a suitable test case to impose further serious restrictions on freedom of speech and freedom of association in Hong Kong. This follows two years of successive political restrictions, new repressive laws, banning of election candidates and harsh prison sentences on young pro-democracy campaigners who have engaged in protests against the Chinese ‘Communist’ (CCP) dictatorship and its puppet local government.

This is the first time the Societies Ordinance has been used to crackdown on political organisations since the handover from British rule in 1997. It marks an unmistakeable intensification of the government’s attacks on democratic rights. Once the Security Bureau issues an order on ‘national security’ grounds it is illegal to participate in the activities or donate to the organisation. The maximum penalty is a fine of HK$100,000 and imprisonment for up to three years.

The HKNP has 21 days to appeal against the ban, but in Hong Kong’s current ultra-repressive environment there is little doubt an appeal will be rejected. Thus, once again, the laws so hyped by capitalists and liberals as guarantees of certain democratic rights have become tools for the suppression of democratic rights.

Socialist Action (CWI supporters in Hong Kong) is completely opposed to the politics and methods of the HKNP, especially its racism towards mainland Chinese people and its support for European and American imperialism. In particular this grouping’s call to deport all mainland Chinese from Hong Kong is an example of utterly reactionary, Trump-style racism, which can only help the equally racist CCP-state use divide-and-rule tactics to split and derail mass struggles in Hong Kong and in China along ethnic lines. Socialists stand for united struggle of all working people, regardless of where they were born, against the real enemy, which is billionaire authoritarian rule.

The government’s real target is hardly the HKNP, but obviously to use this as a precedent for then widening its attack and banning other organisations that oppose the government and its authoritarian agenda. The HKNP is a group with almost no support even within the youthful trend of Hong Kong localism (anti-China nationalism). It is nicknamed the “Party of statements” by other Hong Kong independence supporters because “apart from issuing statements, it doesn’t do anything.”

The government’s thinking is very obvious in making the HKNP, which poses no real political threat to the regime, its first target. It wants to establish a precedent and prepare to repeat this method to ban other more significant and genuine opposition organisations in the future. It begins by targeting those who advocate “independence” which as far as the CCP and Hong Kong government is concerned is a topic that cannot even be discussed.

But then the government is systematically widening its net to include other political positions as banned topics. The masses’ demand to “end one-party rule”, fundamental to the democracy struggle, is also now a target of the government’s crackdown. Chief Executive Carrie Lam Cheng Yuet-ngor refused recently to exclude that those who support this demand may face legal consequences, while candidates who have expressed support for this (meaning almost all the pro-democracy opposition parties) run the risk of being blocked from standing in future elections.

The government is using a similar “salami tactic” as it used in 2016, after the Legislative Council elections, to disqualify two newly elected localist legislators, Baggio Leung Chung-hang and Yau Wai-ching for failing to swear their oaths of office in the required manner. This was then widened to remove four other legislators, non-localists, who represent the radical wing of the democracy struggle and were the real target of the government’s purge. 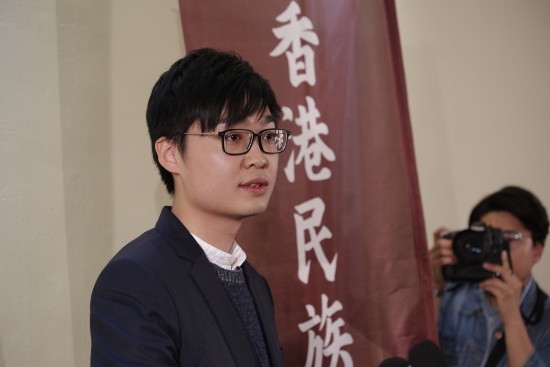 The Security Bureau produced a 700-page dossier on HKNP to justify the ban, covering speeches, social media posts and events attended by the group’s frontman Chan Ho-tin. As at all previous steps of the Hong Kong government crackdown, this is unfolding as part of a synchronised plan to shackle political opposition and defeat the democracy struggle. The government is seizing on certain statements of this group to portray it as a “violent threat” to state security, when in fact it is a case of a tiny self-delusional group that specialises in attention-seeking but little else.

The student party Demosisto, which advocates “democratic self-determination” and whose members are prohibited from running for elections, could possibly be the next target after the HKNP is banned. In this way we can see that the government has already implemented ‘Article 23’ – a repressive security law – in disguise.

The dictatorship is waging a “war” against the political rights of young people. The ban on the HKNP, opening the door for further bans, the persecution of radical pro-democracy parties, manipulation of elections, and imminent introduction of a National Anthem law and other oppressive laws, are aimed at suppressing the voice of young people in Hong Kong who overwhelmingly oppose the CCP dictatorship.

But just like in mainland China, the ultra-repressive policy can’t eliminate mass resistance and the struggle for democracy. In the long run, it will actually have the opposite effect and increase the radicalisation and politicisation of young people, and working people of all ages, and then trigger greater waves of resistance.

The localists, a loose, very confused and fractious political trend, cannot offer a way forward. On the contrary, the narrow nationalist and racist position of the various localist groups, and their right wing pro-capitalist ideology represents a dead-end for any kind of political fightback by young people.

This latest authoritarian attack underlines the need to rebuild a fighting mass democracy movement. It is necessary to protest against every anti-democratic attack and understand that the current system is preparing more and more repression – the attacks will not come to halt by themselves, but only through meeting a wall of mass resistance, which needs to be organised democratically, with elected spokespersons and grassroots committees to decide on strategy and demands.

The struggle for democracy needs to be linked to the struggle against capitalism, to link up with workers in mainland China and globally who are organising and resisting pay cuts and austerity, pro-rich policies, and massive costs for education and housing. Linking these struggles with a socialist alternative is the way to make the democracy struggle a genuine mass movement that can shake any government including the Chinese dictatorship.

New political scandals in Hong Kong, involving lucrative land deals and illegal construction methods on new subway projects show how the capitalists regard the undemocratic political system as an ‘umbrella’ to protect them from mass pressure and accountability. To safeguard their profits they will do their utmost to resist and push back against the democratic demands of grassroots working class people. Therefore, to realise real change the democracy movement must have an anti-capitalist program and a socialist mass party. This is the way to defeat the dictatorship of the CCP and the super-rich. 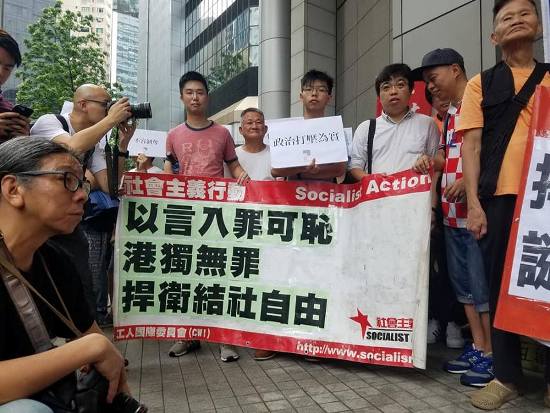