China: Support workers and youth standing up to state repression

These are the fighting words of Shen Mengyu in a letter smuggled out of her arrest cell in Shenzhen, China. We hope our readers will feel as if she is speaking directly to you and take action accordingly.

Shen is a central figure in the three month-long struggle of workers and left activists to establish an independent trade union at Jasic Technology, a maker of electronic welding equipment. In recent weeks the main focus of their fight has been for the release of arrested co-workers and comrades who risk serious punishment for their participation in this campaign.

Shen Mengyu was violently abducted by unidentified men on 11 August. The police refused to investigate her disappearance and dismissed it as a “family dispute” according to a statement on their social media account. They claim that all four surveillance cameras at the site of the abduction were “out of order” meaning there is no proof.

It has recently emerged that Shen is being detained in a house in Shenzhen, an unofficial detention centre or “black jail”. Such methods are a common method of repression in China, making it easier for police to keep someone indefinitely, cut off from access to a lawyer, family or media. There are eight police officers watching her 24 hours a day, even when taking a shower or going to the toilet. Here we publish a photo of the letter from Shen.

The young Shenzhen activists fear a police raid on their meeting place is imminent. They are preparing to resist. The state has tightening its grip in recent days with harassment by police, increased internet censorship and the closure of social media accounts and chat groups that activists and workers used to organise the struggle. “Jasic”, “Shen Mengyu” and “Pingshan” (the Shenzhen district where the struggle is taking place) are all now banned words on the internet.

The struggle at Jasic Technology is a landmark struggle for the emerging labour movement in China, where genuine trade unions are banned and workers face heavy penalties for trying to organise. Despite these threats and obstacles, 2018 has witnessed a dramatic upturn of workers’ struggles and – most spectacularly – the outbreak of several ‘multi-provincial strikes’ involving simultaneous strikes and protests by workers in ten or more of China’s 30 provinces.

This began in April with the crane operators’ strikes and spread to other sectors in May, June and July, such as truck drivers and food delivery drivers. In all of these struggles the issue of creating new unions, separate from the state-controlled yellow union ACFTU (All China Federation of Trade Unions) and under the democratic control of the workers, has been implicit. Actually, many Chinese workers call the ACFTU a “black union” which is even worse than a yellow union – “black” means a tool of repression. The workers’ actions in these huge strike struggles have been coordinated online by unstated unions-in-the-process-of-formation.

The Jasic workers’ struggle, which began in May, has elevated the issue of independent unions and made it the central focus. This is what makes this struggle so important and not just for fighting to improve conditions at their own factory, which Jasic workers have likened to slavery (fines for petty infringements, excessive work hours without days off, underpaying of legally stipulated social insurance and more). The struggle also establishes an important reference point for future workers’ struggles in China.

Initially, the workers at Jasic followed the legal procedures to establish a factory branch of the ACFTU, the only ‘union’ legally allowed. They received the green light from the regional office of ACFTU, or at least they thought so. They began collecting names to set up the branch, collecting 90 names in a few days among the 1,000-strong workforce. They did this despite the bosses’ attempt to outmanoeuvre the workers by creating a so-called ‘workers congress’ under the company’s control.

Then Jasic’s management cracked down accusing the workers of acting illegally. Lo and behold, at this point the ACFTU officials completely sided with the management. The bosses of Jasic are well connected with the local CCP (‘Communist’ Party) establishment, with two of them being ‘delegates’ to Shenzhen’s People’s Congress, an appointed pseudo city council.

Worker organisers Mi Jiuping and Liu Penghua were assaulted by thugs, probably in the pay of the company, and then dismissed on 20 July. The ACFTU officials made no efforts to defend Mi and Liu and instead issued a joint statement with the company on 23 July that “working together” they were establishing a union. This, conforming to the normal pattern of ACFTU ‘unionism’, was a fake trade union branch under the control of the Jasic management. 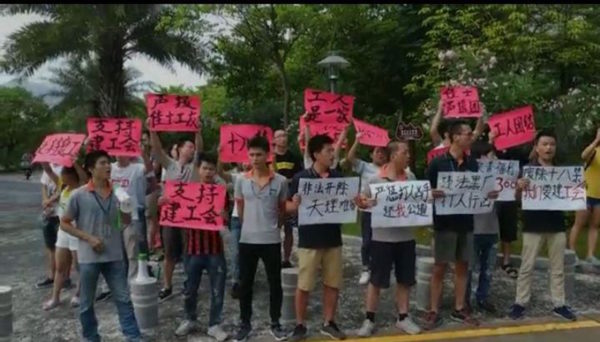 Workers protested the dismissal of their comrades and vowed to continue to campaign for a real union. On 27 July, a protest outside the factory saw police violence against workers and young left-wing supporters with 30 arrests, including Mi and Liu. Amnesty International is among the many groups calling for their release. “The detention of the workers and their supporters is deplorable. The workers’ demand to form a union of their choice to protect their rights is entirely legitimate,” said Amnesty researcher Patrick Poon in Hong Kong.

At the time of writing, 14 of the 30 are still being held by police, including Mi and Liu, while further arrests have been made of young supporters including Shen Mengyu.

Workers and young left-wing activists like Shen and her comrades in Shenzhen are taking heroic risks to defend workers’ rights and build the labour movement in China, facing the world’s most powerful dictatorship and biggest apparatus of repression. Those arrested in Shenzhen face beatings and torture, sleep deprivation, stress positions, threats against family and friends, all with the aim of pressuring them to “confess”, often on video, and to incriminate others.

According to Reuters journalist Sue-Lin Wong, on her twitter account, Jasic workers she spoke to mentioned sexual humiliation among several methods used by police to get signed confessions. Those still being held could well face the charge of “picking quarrels and stirring up trouble” which can lead to up to five years in prison.

The Jasic struggle is a significant turning point also because of the role of young left activists, ex-students and others who are broadly labelled as “Maoists”. The intervention of these youth has provoked criticism from some quarters, some ‘traditional’ labour NGOs and sections of the liberal media overseas.

These layers feel uncomfortable, ironically for the same reasons as the Chinese dictatorship and capitalist bosses like those at Jasic, that workers’ struggles are being “politicised”. Many labour NGOs have also faced brutal state repression despite holding strictly to a “non-political” and “legal” strategy which often consciously limits struggles of the working class even over partial or economic issues.

chinaworker.info does not agree that being “too political” has made the struggle in Shenzhen more difficult or exposed it to greater repression. The workers and young activists involved have shown exemplary bravery and their attitude of consciously seeking international solidarity is a welcome and necessary step forward for the workers’ movement in China. Workers’ solidarity across borders should become the “new normal” notwithstanding the CCP’s nationalistic propaganda accusing protesters of being “manipulated by foreign forces”.

The struggle for union rights and against repression is reaching a crucial phase in Shenzhen and therefore international working class solidarity is needed more than ever. chinaworker.info has received dozens of reports and photos from socialists and trade unionists. A special acknowledgment needs to be made of the members of the Committee for a Workers’ International (CWI) for organising swiftly and decisively from South Africa to India to Mexico.

Given what could be a significant escalation of state repression against the struggle in coming days we urge our readers to step up their efforts: Go to China’s embassies and consulates to protest! Contact your trade union to endorse the solidarity statement below. There are Jasic Technology factories in more than a dozen countries including Britain, France, the USA and Malaysia, and where these factories are organised we hope the trade unions will declare their solidarity with their co-workers in China.

The following statement is from socialist TDs (members of parliament) in Ireland – please get your organisation or union to issue a similar statement and send it to the address below:

“We, Solidarity TDs and Socialist Party members declare our full solidarity with the landmark struggle of Jasic Technology workers in Shenzhen, China, to establish a democratic trade union. We call for the release and dropping of all charges against Jasic workers and their young supporters who have not committed any crime other than to stand up for the rights of working people. In particular we are alarmed by the reported kidnapping of activist Shen Mengyu who disappeared on 11 August and the refusal of the Shenzhen police to investigate this crime. We salute the bravery of these youngsters and workers in facing beatings, mistreatment and sexual intimidation at the hands of some police officers as well as criminal gangs. Workers of the world unite!” 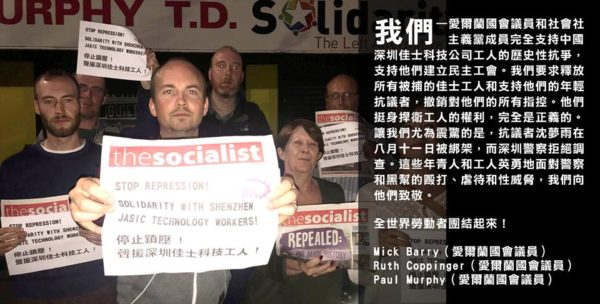 US Texas: All out to defend reproductive rights!