There is no rest for the wicked. British Prime Minister Theresa May had to cut short her Italian holiday to visit the French president, Emmanuel Macron, at his Mediterranean castle retreat.

May’s hope is that he might help her resuscitate the so-called chequers deal for leaving the EU – at least in some form – and thus assist in holding her crisis-ridden Tory government together.

Meanwhile, the governor of the Bank of England, Mark Carney, issues dire warnings about the dangers posed by the increasing likelihood of a no-deal Brexit.

Jeremy Hunt, the new foreign secretary, talks of ‘no deal by accident’. Environment Secretary Michael Gove – theoretically in the camp of the hard Brexiteers – moots the idea of ‘parking’ the UK in the single market and customs union until a deal is worked out at some indefinable point in the future.

The Tory party is in a desperate state, deep in the grip of a potentially terminal crisis. May’s government teeters so close to the edge that – especially if it were faced with a mass movement, headed-up by Jeremy Corbyn along with the trade union and labour movement as a whole – it could be forced out within no time.

Yet what has dominated the headlines over the past week? A call to action from Corbyn and the trade union leadership? Labour boldly demanding a general election? Nothing of the sort.

Instead, the Tory crisis has often been relegated to inside pages. In its place is a barrage of poison, slander and vicious abuse directed at Jeremy Corbyn’s leadership of the Labour party.

The trigger for this latest, frenzied chorus of attack is precisely the crisis engulfing the government. Britain’s capitalist class lacks reliable political representation. There is no party it can count on to act in its interests in negotiating exit from the European Union.

The one thing staying the hands of May’s multiple potential Tory assassins is their fear that a general election could see a further surge in support for an anti-austerity alternative – that a Corbyn-led government could be swept to power.

This, the capitalists understand, would have the potential to further awaken the appetite of working class people for a decisive break with austerity, and for more far-reaching, socialist measures.

That’s why the agents of the rich 1% remaining in the Labour party – the Blairite fifth column – are approaching this latest round of Corbyn-bashing with such fresh zeal. 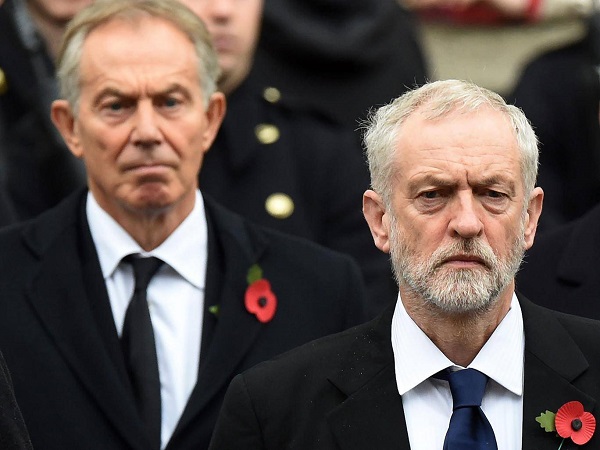 But what is the response of Corbyn, John McDonnell (Labour’s shadow chancellor), and the leadership of Momentum to these attacks? What shots have been fired in return?

Since Corbyn’s election in 2015, the Socialist Party has warned of the dangers posed by an approach of seeking false ‘unity’ with the pro-cuts, pro-capitalist elements still dominating Labour in parliament, local councils and much of the party machinery.

Almost three years on, there has been no let-up in their campaign to undermine Corbyn. Two leadership election victories, a general election surge and a poll lead, have all failed to convince these pro-rich politicians to support him.

It would be folly to think that a potential general election win by Corbyn – now a clear possibility – would have this effect. Every concession made to the Blairite right by Corbyn or McDonnell has acted to embolden them to intensify their attacks.

That is why the decision, seemingly taken by Momentum’s (essentially self-appointed) leader Jon Lansman, to drop Pete Willsman from the left slate for the Labour National Executive committee elections following the publishing of a secretly-made recording of him making some clumsy – though by no means antisemitic – remarks, was such a mistake (further material on this to follow).

This was a move characteristic of the general approach that the leadership of the Corbyn movement has adopted since the first poll predicting his victory in the leadership election in 2015.

A change of course is an urgent necessity. The stakes now are higher than ever. With the Tories on the brink, a Labour government is potentially on the cards.

It’s possible that a section of the Blairites could move to block such a development by splitting from Labour to form a new party. Fresh chatter in the press suggests this is in the air.

But we cannot wait for them to leave, at a time designed to inflict maximum damage on Corbyn. The workers’ movement needs to clear them out.

This is why, as well as calling for people to take to the streets and organise to kick out this Tory government, it’s vital that Corbyn fights to mobilise his tens of thousands of supporters, along with the trade union movement, to take on the right in his own party.

This means being prepared to fight for the kinds of measures the Socialist Party has been calling for since Corbyn’s election: the measures which are necessary to transform Labour into a genuine workers’ party.

We call for mandatory re-selection. With a snap election on the cards it is urgent that a genuine democratic say in which candidates represent Labour at elections is given to party members and trade unions.

We fight for the opening up of the Labour Party to all elements of the workers’ and socialist movement, including the Socialist Party, to participate in it on a federal basis.

We argue for the reversal of all the anti-democratic measures introduced by Blair and the re-founding of the party along genuinely democratic, socialist lines – including the full restoration of the democratic rights of trade unions and party members in deciding party policy.

The attacks Corbyn is facing now, severe and relentless as they are, will be as a shadow compared to those that would face him and his government should they threaten the profits of the capitalist class in seeking to carry out their programme.

We therefore call on him to take the urgent action necessary to organise the fight to take on the right now – helping to prepare the forces that will be needed in order to defend his anti-austerity stand and to fight for socialist change.