The Jasic struggle and the Left in China

A new chapter of struggle has opened in China

The struggle for trade union rights at Jasic Technology in Shenzhen has opened a new chapter in the recent history of China’s labour movement. This struggle has captured the imagination of significant layers of radicalised youth across China and key groups of workers looking to organise themselves and fight for their interests. It has won admiration from workers and left activists globally.

The workers and young supporters involved in this struggle have braved police brutality, a ruthless company management, the deceitful anti-worker manoeuvres of the official so-called union, ACFTU (All China Federation of Trade Unions), the full force of state repression with trumped up ‘crimes’, and dishonest state propaganda (Xinhua). The student supporters have in some cases also had to struggle against their school authorities and parents (underlining how the patriarchal bourgeois family unit can be used as a tool of state control).

The CCP regime has reacted to the Jasic struggle in characteristic fashion, with a sweeping crackdown aimed in equal measure against worker activists and against the young ‘Maoist’ supporters. This crackdown was clearly sanctioned at national level, rather than being a province-level police operation as some of the young activists initially believed.

Left-wing websites were raided and closed, temporarily, but as a warning to pipe down, while arrests were also made in Beijing and other cities. In total over 70 workers and youth have been arrested and fifteen are still being detained. Four workers, three of whom were unfairly dismissed by Jasic bosses for their attempts to build a union, have reportedly been charged with “picking quarrels” which can lead to five years in jail. No students have yet been charged although there are online rumours that prominent activist Yue Xin may be charged with “supporting Taiwan independence” – a bizarre but potentially serious allegation.

The government clearly prefers to tread lightly with the youth activists. This is in part because their identification with Maoism creates difficulties for the regime (because under Xi Jinping it leans on some ‘Maoist’ and ‘socialist’ rhetoric to maintain support among certain sections of the populace and blunt the growing anger against social injustice). But the main reason is they fear a political backlash among youth. For the detained workers, however, the repression can be worse. Therefore the main focus of solidarity work in the next period must be the plight of these workers – Yu Juncong, Mi Jiuping, Liu Penghua, Li Zhan – to demand the dropping of all charges. 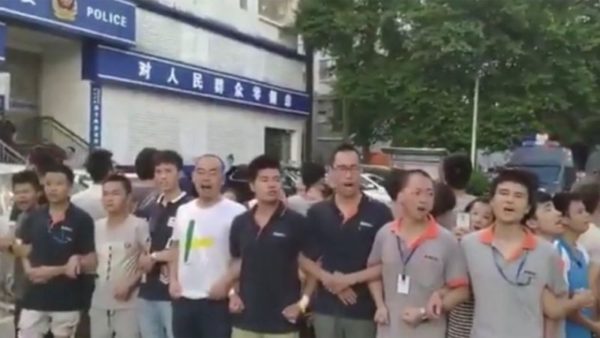 chinaworker.info has actively supported this struggle including appealing for and initiating international solidarity actions. This does not mean that we completely agree with the ideological outlook of some of the ‘Maoist’ influenced youth active in this struggle, although this definition is a broad one, describing a trend with many different shades of left wing opinion in China.

We do not regard the Maoist regime of the 1950s-70s as a model for a future socialist society. We would have differences with some of the young activists over whether it is possible to ‘reform’ the current CCP-state or whether in fact, as we argue, this state has become bourgeoisified, a special form of state-led capitalism, which merely pays a certain lip service to ‘Marxism’ and ‘socialism’ in much the same way as do Social Democratic and Communist Party politicians in other countries, who long ago embraced capitalist policies. More immediately, we have debated with some Maoist activists (see our debate with redchina website) over the issue of independent workers’ unions, which we have consistently advocated.

These are issues we are always willing to debate in a comradely atmosphere. This in no way colours our attitude towards groups of workers and youth in struggle as is the case in Jasic, which in our opinion is a magnificent example for the working class as a whole. The first duty of revolutionary socialists is to support and intervene in the actual struggles of the working class, to strive to assist the workers practically and politically to build their own organisations, to formulate their demands, propose concrete new steps for the struggle and win support from the wider working class. All of this is essential for victory. In the conditions of China, of state repression against the working class and the outlawing of real trade unions and workers’ self-organisation, this is likely to be a long and arduous struggle.

We reject the criticisms from a certain NGO-linked layer and from some so-called lefts in China, who accuse the young Maoists of “hi jacking” the workers’ struggle, of making it “too political” and of “seeking confrontation” at the expense of the workers’ immediate struggle against sweatshop conditions. Similar criticisms are almost always raised in any struggle by those who refuse to see the real situation, who fear struggle and its effects in radicalising the masses. These “experts” argue – without evidence – that the actions of the Jasic Support Group were counterproductive, that they overshadowed the struggle inside the workplace, and made serious repression more likely.

We strongly disagree. The liberal-leaning NGOs, who’s alternative is a low-profile “non-political” strategy to advance workers’ rights, have themselves been targeted for serious repression and arrests. Several of China’s labour NGOs have been closed down or paralysed by arrests and intimidation. Clearly, a “non-political” approach offers no protection against state repression, while it reduces the effectiveness of workers’ struggles by limiting their demands and not posing the real issues clearly.

In the Jasic struggle, the youth and workers have shown valiant resistance of a type the CCP-state is unfamiliar with. They have sung revolutionary songs in the arrest cells to keep up morale, harangued the cops for not being communists, but most importantly they have gone public through social media, immediately, at every opportunity, to expose the repression and shame the authorities. This in our opinion is a great example, when other earlier victims of repression have been scared into silence. Rather than the young activists “radicalising” and “politicising” the struggle, as the critics argue, it has been the brutal response of the state that has done this. The worker and youth activists have responded to this brutality in the the best way they possibly could. This is the inevitable logic of the class struggle under the increasingly repressive rule of Xi Jinping.

As Karl Marx said, “every step of real movement is more important than a dozen programmes”. This is how we evaluate the Jasic struggle. Has it taken the struggle of the working class forward? In our opinion the answer is a clear yes. It has raised the consciousness of important layers – not only those directly involved – and has put down an important reference point for future workers’ struggles especially on the crucial issue of independent unions.

Skeptics can scoff that this right, to form a democratic union, has not been won by the workers at Jasic. The struggle is being repressed. But this is the beginning of a long battle – such is the reality of the class struggle in Chinese conditions. It will require a truly mass movement, with workers linking across many parts of the country, to force change on an issue which is seen as fundamental to the interests of the capitalists and the state to block. Similar battles are raging across the world, with trade union activists victimised, jailed and even murdered in some countries.

What should the workers at Jasic have done in July – meekly accepted the insulting offer of a “fake union” imposed by the company in cahoots with the local ACFTU bureaucrats? By refusing this and resisting, the workers have increased the pressure on Jasic bosses, who’s actions are now being watched around the world as a result of a growing solidarity campaign. This can force the bosses to make concessions over pay and conditions to the workforce in the coming period, of course motivated by the need to “restore stability”, but concessions that would have been less likely if workers had surrendered to the bosses’ blackmail in July.

There are occasions when a struggle that begins in the workplace needs to take other forms and for a period can be forced to operate externally – as a campaign by persecuted former workers and activists fighting for reinstatement and justice. This battle ground is dictated by the bosses and the police, workers can only react. The key task is to maintain the cohesion of the struggle, with democratic decision making and an orientation to the wider working class including internationally.

The Jasic struggle raises extremely important questions for the future. Despite the repression, the issue of independent unions as the only alternative to the “black” ACFTU is back on the agenda for workers in China. This completely vindicates the position taken by chinaworker.info for example in our debate earlier this year with the Maoists of redchina website, who opposed the demand for independent unions as reactionary and “pro-bourgeois”, ignoring the strike-breaking anti-working class role of the ACFTU. That it is the ACFTU which is “pro-bourgeois” has become crystal clear in the light of the Jasic struggle, if it wasn’t already.

➳ Reply to redchina: What do socialists mean by independent unions?

In our reply to redchina we stated, “The slogan of independent unions has not been invented by Trotskyists and Marxists, but has arisen from the workers themselves, from their own experience. In some of the struggles in 2018 such as the strikes by tower crane drivers, the workers have called for an independent union and this has actually been created, de facto, by these workers.”

We threw out a challenge to the editors of redchina: “Name a single strike in China in recent years that has been organised or even given support by the official unions? You will find this a very difficult mission.” They have still not risen to our challenge.

“The slogan of independent unions has not been invented by Trotskyists and Marxists, but has arisen from the workers themselves, from their own experience.”

redchina were one of three websites persecuted in the regime’s August anti-left crackdown and we strongly protest this persecution. We organised protests in Hong Kong and Taiwan. Perhaps, based on the actual experience of the Jasic struggle, redchina has realised that their position against independent unions offers no political solution for the workers’ struggle. After all, as Engels said, “An ounce of action is worth a ton of theory.”

The struggle at Jasic can play a big role in strengthening the workers’ movement and strengthening the left – a real left – in China. chinaworker.info stands for unity in action, to “strike together” as Lenin put it, even if we “march separately” in that important political differences, over slogans, programme and perspectives, need to be addressed and cannot simply be set aside. Vital and at times sharp political debates in no way cut across or contradict building for united action against the capitalists and their state forces.