The Chinese economic slowdown is intensifying amid the most serious crisis in US-China relations for four decades. But so far the trade war with America’s volatile president Donald Trump is not the main cause of China’s economic woes.

China’s exports, including to the US, have continued to grow despite Trump’s tariffs, which were introduced in July and then widened in September. Due to various factors including the front-loading of exports to beat the imposition of tariffs, and also the strong dollar, China’s exports rose 12 percent in the first nine months of 2018. Accordingly, in the third quarter, the US trade deficit with China reached US$106bn, an increase from US$92bn in the same period a year ago.

China’s main problems have been on the domestic front, in particular a severe credit squeeze aggravated by Xi Jinping’s 18-month old campaign to bring debt levels under control (‘deleveraging’) and rein in the shadow banking sector. This is weighing on consumer spending, investment, and the ability of many highly indebted companies to stay afloat. October’s data shows falling sales in key economic sectors such as vehicles, property and electronics. Sales of motor vehicles dropped 11.7 percent in October from a year earlier, according the China Association of Automobile Manufacturers. China is by far the world’s largest auto market.

Xi’s team have until recently been reluctant to abandon their deleveraging drive despite the sharp slowdown in economic growth that began in the spring. They know that current extreme debt levels are a time bomb that could in future threaten the banking system and – ultimately – the regime itself. 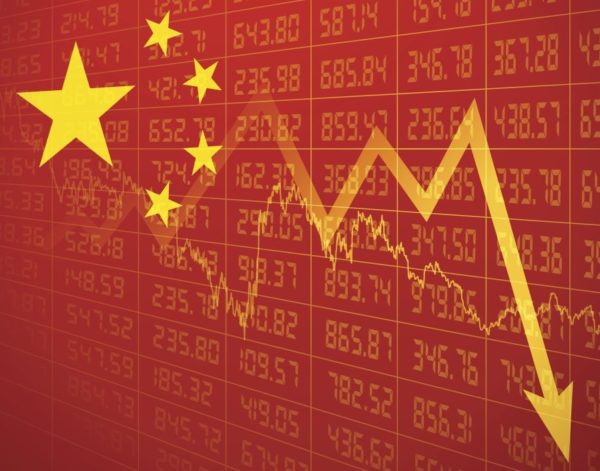 But the credit squeeze has hit the private sector especially, with a sharp rise in defaults and growing numbers of private companies being bailed out by the central and local governments. While overall economic growth reached 6.5 percent in the third quarter – the lowest level since the global financial crisis a decade ago – the private sector is faring much worse, with conditions close to outright recession.

Many economists dispute China’s official figures and believe underlying growth is between 3 to 4 percent, meaning that the US economy, turbocharged by around US$2 trillion in Trump stimulus policies, may currently be growing faster than China’s.

“These are desperate times,” says Wang Xiangwei in the South China Morning Post. “Business confidence in China’s private sector, which contributes 60 percent of GDP and 80 percent of jobs, has been at a historic low.”

According to Ding Anhua, the chief economist at China Merchants Bank International, “Evidence shows that China’s private sector has been caught in a severe environment unprecedented in 40 years of capitalist economic reforms.”

This is linked to the steep falls on China’s stock markets, with the main CSI 300 Index down by 30 percent since January. This adds up to around 21 trillion yuan (US$3 trillion) in shareholder losses so far in 2018, which by way of comparison is almost ten times China’s total investments in the seventy countries of the ‘Belt and Road Initiative’.

Stock markets have fallen sharply across the so-called ‘emerging markets’ this year, and since October the selloff has spread to the US and other advanced economy stock markets. This reflects a combination of factors, but mainly the capitalists’ fears over the US-China trade war and the darkening outlook for the global economy.

But in China’s case, the stock market slump carries additional dangers because many private companies have pledged their shares as security for obtaining loans. This practise has increased in the face of the government’s crackdown on financial risk, which has shut down many alternative channels in the shadow finance sector through which private companies could access credit. Of the 3,491 companies listed on China’s two stock exchanges, all but 13 have pledged their shares as collateral for bank loans.

In October, the deepening stock market rout pushed many of these pledged shares below the level at which banks are required to liquidate them, meaning they would be sold into a falling market. By 12 October, government data showed that 35 percent of China’s collateralised equities, worth around 890 billion yuan, had fallen below their margin requirements. A further 61 percent were close to “cautionary levels” the data showed.

This “share pledge crisis” risked triggering a vicious cycle: “Share drops lead to liquidation and liquidation leads to further share drops,” an investment officer in Shanghai told the South China Morning Post. To break this cycle, the government introduced a slew of new measures in an attempt to put a new floor underneath share prices.

The government, through various state-owned brokerages, has begun pumping more money into the stock market to support those companies most at risk. Rule changes were also announced making it easier for companies to buyback their own shares – a trick commonly used on Wall Street, which temporarily can inflate share prices. In the short-term, these measures have halted the Chinese stock market’s downward spiral. But the question is for how long, especially if conditions in the real economy and globally continue to worsen?

Coinciding with this latest flurry of state intervention in the stock market and more policies aimed at supporting private companies, a major government propaganda offensive is underway, spearheaded by Xi himself, to calm the fears of the private sector capitalists. This message is also aimed at US and foreign capitalists, a growing number of whom are considering shifting production out of China to other non-unionised low-wage countries should the trade war continue.

In November, Guo Shuqing, who heads the China Banking and Insurance Regulatory Commission, declared that at least a third of new loans should be earmarked for private companies and this share should rise to 50 percent in three years. Guo’s comments were reinforced by the central bank, on 16 November, in a statement ordering banks to “improve their political positioning” by channelling more funds into the real economy. This followed data for January-August showing the weakest growth in fixed asset investment since 2003.

Xi pledged “unswerving” support for the private sector, which he described as “belonging to our own family”. Xi repeated these themes at a symposium in November, described as “unprecedented”, of around 50 top private capitalists including the billionaires Robin Li Yanhong of Baidu and Pony Ma Huateng of Tencent. “Any words or actions that weaken the private economy are wrong,” he told them according to Xinhua.

This message is designed to counteract the widely held view – based on clear evidence – that the state sector is advancing while the private sector is in retreat (guo jin min tui).

This is due, however, to the crisis of capitalism and the dependence of China’s private sector capitalists on government support, rather than “ideological” motives or a desire on the part of the CCP (so-called Communist) regime to turn back the clock to the days of economic planning and “socialism”.

The debt of China’s listed companies has doubled in the past five years to almost 33 trillion yuan, according to Asia.Nikkei, and without new infusions of credit many of these companies cannot meet their existing debt repayments.

Provincial and local governments have announced new “rescue funds” and a string of bailouts has effectively transferred the ownership of several stock market listed companies – at least 30 to date – to local governments. However, government officials have been at pains to stress these interventions are meant to be temporary, they will not “meddle” in the management of these companies, and government stakes will be sold down “when the market improves” (South China Morning Post, 17 November).

This was underlined by vice premier Liu He, Xi’s top economic aide, who told the People’s Daily that government bailouts showed the coexistence and cooperation between the public and private sectors. “The state can divest, when the businesses at the private companies improve,” Liu said.

These latest state interventions are of course a negation of the government’s deleveraging campaign. Local government’s whose debt levels are already off the charts are now being encouraged to take on more debt to bailout distressed private companies. On the basis of capitalist economics, with no planning or democratic control by the working class, this only adds to the problem of excess capacity and loss-making “zombies”.

All this represents a major policy change by Xi’s regime since October. At least for the foreseeable future, the deleveraging campaign has been shelved – a development we predicted. In the past month the National Development and Reform Commission (NDRC) has approved at least 130 billion yuan (US$18.7 billion) worth of infrastructure projects.

Two things here are worth underlining. The first is that Liu He especially, but also Xi who elevated Liu to the Politburo last year, have invested enormous personal authority in the cause of deleveraging. That this is now abandoned underlines the serious state of the economy and provides a welcome reality check over the “strongman” image that Xi and his supporters want to project. It confirms that the regime’s room for manoeuvre on the economy, as we have also pointed out, has shrunk considerably.

The second point to underline is that China’s looming debt crisis is set to worsen. “I’m not optimistic that there will be significant deleveraging in 2019 and that means that the existing debt level is likely to maintain at the current levels or even rise, which could be disastrous,” said Andrew Collier of Orient Capital Research in Hong Kong. “At some point you’re going to have a defaulting situation in different parts of the system,” he told CNBC.

Between 2004 and 2008, China’s gross debt was stable at between 170 and 180 percent of GDP, but according to the Institute for International Finance, from the end of 2008, when the global financial crisis took hold, and the first quarter of this year, the country’s gross debt exploded from 171 to 299 percent of GDP.

And current calculations of China’s debt may underestimate the real situation. A report from S&P Global Ratings, on 16 October, warned that so-called “hidden” local government debt, buried in various shadow banking entities, could be as high as 40 trillion yuan (US$5.76 trillion). This sum is more than three times the officially reported figure for local government debt, which was 16.6 trillion yuan (US$2.4 trillion) in January 2018.

International conflicts and the possibility of global capitalism entering a new economic crisis in the next period, along with the growing trend towards more organised and coordinated struggles by Chinese workers, are all factors increasing the pressure on Xi’s regime. Its standard response – more repression – is no longer a guarantee of regime “stability”. The task in the coming months and years is to organise a clear socialist working class alternative to Xi’s dictatorship and China’s debt-laden state capitalism.