US-China trade war – can Xi and Trump back away from conflict?

All eyes are on the G20 meeting in Buenos Aires at the end of November. On the sidelines of the summit, China’s Xi Jinping will meet his US counterpart Donald Trump for the first time since the world’s two economic giants became embroiled in a trade war five months ago.

Could the meeting of the two leaders bring the conflict to an end? While many capitalist commentators are hoping for a “miracle in Argentina” the most recent signals, and the fundamental positional divide between the two sides, suggest this is unlikely. It seems that, at best, a truce could be declared at the G20 whereby Trump’s threats of new tariffs – to encompass all Chinese imports to America, from the 50 percent affected today – are put on hold to allow more talks, while existing tariffs from both sides would remain in place. Even this ‘best case scenario’ is perhaps not the most likely outcome. 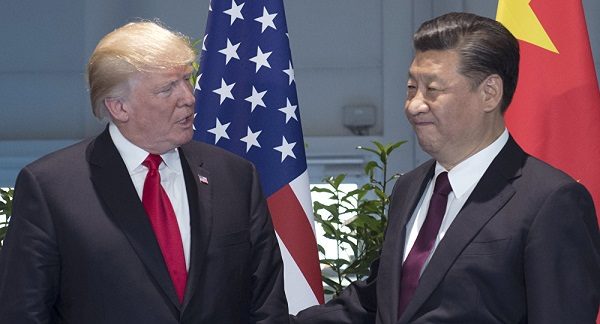 The conflict between the two superpowers, described as a ‘cold war’ by many commentators, has become the defining story of 2018. It has increasingly moved beyond trade to encompass a broad range of issues – investments, technology, allegations of economic espionage, China’s military policies and its global infrastructure plan, the Belt and Road Initiative. This represents a historical turning point as summarised by The Economist magazine: “The era of engagement is over. The world’s two superpowers have become rivals.”

The economic fallout from Trump’s imposition of tariffs in July, on an initial US$50bn of Chinese imports, which was extended to a further US$200bn worth in September, has so far been limited. But this could change dramatically if the trade war continues and escalates in 2019.

Under this scenario, the US economy, which has suffered only marginal effects so far, could suffer a lot more from higher prices for Chinese products, driving up consumer inflation thus prompting the central bank (Federal Reserve) to increase interest rates more rapidly. Trump is already unhappy that the Fed is raining on his parade, blaming the central bank for puncturing the unprecedented US stock market bubble. “The Fed is going wild. They’re raising interest rates, and it’s ridiculous,” he said in October.

Wall Street has been rocked in recent months, with US stocks entering ‘correction’ territory twice since the start of October. A stock market correction is defined as a fall of 10 percent from the most recent high. This is ironic because Trump’s representatives have often pointed to China’s stock market, the world’s worst performer in 2018, as proof the US president’s aggressive trade agenda is “working” and will force the Chinese government to meet his demands.

The pressure is mounting on both sides to avert an escalation of the conflict, but this does not automatically mean they can reach a deal. In late October, Trump’s tweet that negotiations between the two sides were “moving along nicely” triggered a surge on global stock markets. There seems to be little substance to this claim, however, and many commentators dismissed Trump’s comments as a political move in the final days of the Congressional election campaign.

Various global forecasters are predicting that if the US-China trade war rumbles on into next year its impact on the global economy will be more significant. A recent OECD report warns this could knock 0.8 percent from global growth by 2021. This would represent a sizeable slice out of the 3.5 percent growth the OECD forecasts for 2019 and 2020. Financial turbulence, of which we’ve already had a foretaste, could be even greater than the impact on GDP. Theoretically, this could even trigger a new worldwide recession if heavy financial losses, from the gigantic casinos that dominate modern capitalist economies, spillover into the real economy.

But even with the economies of both China and the US feeling more pain as the conflict drags on, the trade disputes are dwarfed by political and strategic interests that have escalated dramatically since the summer. These were on full display at the recent APEC summit in Papua New Guinea (17-18 November) the first ever to end with no agreement on a final communique. China, with Xi in attendance, refused to sign the document into which the US had inserted criticism of “unfair trade practises” – a veiled attack on China.

The extent of the rivalries between the Chinese and US regimes was shown by the speech of Mike Pence, Trump’s vice president, at the APEC meeting. He launched a tirade not only against China’s alleged trade abuses but against Xi’s flagship BRI project: “We do not offer a constricting belt or a one-way road… We don’t drown our partners in a sea of debt. We don’t coerce or compromise your independence.”

Pence told the assembled countries, “Do not accept foreign debt that could compromise your sovereignty. Protect your interest. Preserve your independence. And just like America, always put your country first.”

It’s preposterous of Pence to claim the US has never violated other countries’ independence, used coercion, or used debt as a weapon to secure its economic domination. Dozens of countries from Mexico to South Korea have a vastly different experience. But this new belligerent tone shows that Trump’s administration wants to whip up and exploit opposition on the ground in BRI countries especially in Asia, against Chinese financial control and Beijing’s deals with corrupt local elites. US capitalism, allying with Japan, Australia and India in this endeavour, hopes to extract economic and geopolitical advantages by pushing back against China’s cheque book diplomacy in the region.

Pence further angered the Chinese delegation by meeting with Taiwan’s representative, Morris Chang (Taiwan participates in APEC as an “economic” but not as a “political” entity). Pence announced he would “carry back” a Taiwanese proposal for a free trade agreement with the US. This is nothing but a continuation of the shift in US strategy since Trump came to power, to use Taiwan as an ultimately ‘expendable’ chess piece to increase pressure on the Chinese regime.

While a “mock deal” may be reached in Argentina, as Bo Zhuang of TS Lombard surmised, “We don’t think this deal will be engineering a long-term truce between the two countries”.

It doesn’t appear likely that the Chinese side can significantly increase the trade concessions it already offered in May when it believed it had reached a deal with the US to avoid tariffs. To do so could pose a threat to Xi Jinping’s personal authority, with implications for his rule going forward.

In the months that have passed since the trade conflict began, the Chinese regime has been assessing alternative strategies that include an even greater emphasis on “self reliance” and massive state-backed investments to develop its own technology industries and in this way offset US moves to block its access to their advanced technologies.

The Trump administration’s insistence that China implement “structural changes”, meaning the abandonment of state capitalist measures, is non-negotiable as far as Xi is concerned. The current economic model is what keeps the Chinese dictatorship in power. All that it can offer are some additional superficial reforms and market opening measures to pacify (i.e. bribe) sections of foreign capitalism.

The conflict could also escalate in a number of ways, possibly with Beijing abandoning its current defence of the yuan and allowing a more significant devaluation. The government-owned China Daily has hinted as much, and there are indications the yuan would have already pierced the psychologically important level of 7 to the US dollar, but for the meeting between Xi and Trump in Argentina.

This conflict underlines the instability and unviability of global capitalism, which entered into unprecedented crisis with the US financial meltdown of ten years ago. The workers’ movement is the only force, based on the ideas of internationalism, solidarity and socialism, that can lead mass struggles to end the chaos of capitalism.