Hong Kong: Go to the streets on October 1st!

Demonstrations should not require police approval – Export the Hong Kong revolution to China!

After almost four months of this historic mass struggle, Hong Kong has become a city under police rule. The CCP (so-called ‘Communist’) dictatorship fears that the democratic movement will spread to the mainland and challenge its hold on power. Its main tool to suppress the Hong Kong movement is the police, with torture and other abuses taking place continually.

Spread the struggle beyond Hong Kong, but no trust in foreign governments

The CCP dictatorship’s strategy, with violence and threats, is to exhaust the mass movement in Hong Kong. Hong Kong cannot defeat the world’s most powerful dictatorship alone and must seek international links. But we cannot put any trust in foreign governments. Instead we need to get support from trade unions, social movement organisations, and ordinary workers and youth around the world. Western governments, like the Chinese government, are only concerned about their geopolitical power and business interests – their “concern” for human rights and democracy is pure deception. As we all know the Hong Kong police are trained in the UK. The water cannons are bought from Germany! 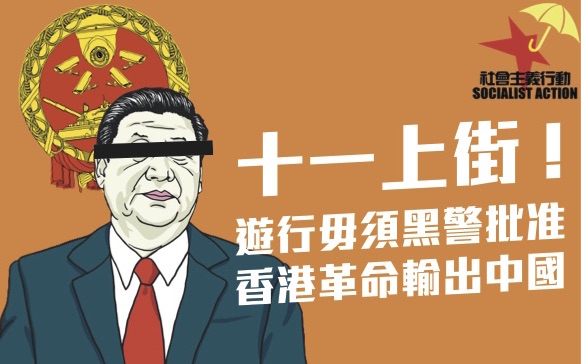 The ‘Hong Kong Bill of Rights on Human Rights and Democracy’ [currently before the US Congress] is nothing more than a paper tiger. We must not pin our hopes on it. Marco Rubio, the right wing politician who sponsors this bill, admits that even if it passes, Trump’s government could just ignore it. If a few Hong Kong officials like Carrie Lam are blocked from travelling to the US, or disqualified from buying a mansion in California, it is only symbolic and will not change the tyrannical policy of the government.

Therefore, the true allies we can win to our side are the working class and oppressed people in China and around the world. Petitioning the US and British governments and raising the US flag will only make the people of Western countries mistakenly believe that we are on the side of their enemy.

The most crucial thing is to export the Hong Kong revolution to China and unite with the masses in the mainland to defeat a regime that rules 1.3 billion people. Today China already faces an economic crisis. Army veterans who are owed their pensions will also reportedly go to the streets on October 1. These challenges push Xi Jinping’s regime to strengthen repression, forcefully ban workers from organising trade unions, and block the development of working class organisations that can challenge the decadent totalitarian rule of Chinese capitalism.

Recently, photos from inside Xinjiang’s giant concentration camps have been published. The photos of Uighur Muslims with shaven heads being escorted by armed police have also made Hong Kong people understand that Xinjiang could be Hong Kong’s tomorrow. So the fate of the revolution in China and Hong Kong is inseparably linked.

In order to win the support of workers and young people in mainland China, we cannot just appeal for support for our movement’s five demands. We must also raise demands that further the struggle against oppression and dictatorship on the mainland: Immediate and full democracy in China and Hong Kong, the right to form independent trade unions, freedom of political association, freedom of speech against censorship. We also want to support the struggle of Chinese workers, youth and poor peasants, for an 8-hour work day, universal retirement protection, and a massive increase in public resources such as healthcare, education and housing.

Under the current conditions of a de facto police state in Hong Kong, all peaceful marches are banned and the police are madly attacking demonstrators to create images of violent conflict in an attempt to deter ordinary citizens from going to the streets. Over the past months, the June 9, June 16, and August 18 mass demonstrations have provided a backbone for the movement. It is time to gather the people again and make a powerful show that public opinion is still on the revolutionary side against the regime, in order to continue the movement, to build for a real general strike, and to escalate the struggle.

The way to defeat the police ban is to openly call on the masses to defy the ban, to continue the march and say loudly that the gangster police have no right to decide whether the procession is legal. This must be stated openly to all Hong Kong people and cannot be concealed.

The Civil and Human Rights Front [convenor of the million-plus demonstrations in June and August] has played an important role in the movement, but under pressure from the moderate pan-democrats the Front has only called for spontaneous “walking the streets” [after its demonstration applications were rejected by the police]. This tactic is not enough. It puts the responsibility for resisting the police ban onto the individual. What is needed instead is a strong collective action. That this did not happen after the banning of marches called by the Front on August 31 and September 15, has deprived the movement of a concentrated leading force and it has therefore become more fragmented. Lack of leadership and collective direction are obstacles to the success of the struggle.

The mass movement has continued for almost four months, but the “fluid” character with no leadership has now reached its limit. For victory a different model and method of struggle is needed. We need to build democratic action committees. No matter what tactic is adopted to try to avoid arrest and prosecution, the Front’s leaders must call on people to ignore the police ban on the October 1 mass demonstration. Action committees should be organised from the bottom up, with democratically elected representatives, in order to let all protesters and groups democratically make decisions and decide the direction of the movement.