Apart from enraging Beijing what difference will the new law make?

The US Congress has now passed the Hong Kong Human Rights and Democracy Act. The bill passed unanimously in the Senate on 20 November. This reflects the major shift in opinion in ruling US circles in past years – against China rather than for Hong Kong.

Many Hong Kongers are hopeful this legislation will give a boost to the struggle against the Chinese dictatorship. Unfortunately the reality is very different. 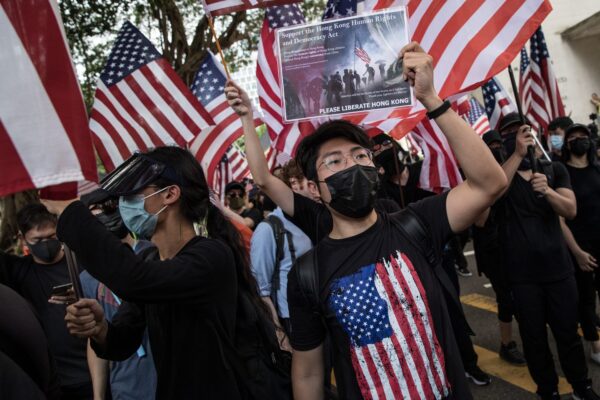 In 2014 and thereafter, British colonial flags were often brought to demos in Hong Kong, mostly by localist (Hong Kong nationalist) youth. Nowadays these have been replaced by US flags because nobody now expects much from Britain. It’s right-wing government has largely bent to the Chinese dictatorship’s pressure because the British capitalists are desperate for business especially as they are set to leave the EU. But the US is a superpower, the thinking goes, so it can help Hong Kong? Here’s why that is a cruel illusion:

Democratic change has never been brought about by ruling elites and governments, especially not the US which has supported many vicious repressive regimes (including China’s) for geopolitical gain. Working people can only rely on their own strength and own organisations – including international grassroots solidarity.