Independent action by the working class can break the current deadlock.

After weeks of stand-off between the mass protesters and the Lukashenko regime, the current deadlock can only be broken for the benefit of ordinary people if there is a return to independent action by the working class through strike action.

Over the weekend, protestors once again gathered in Minsk and other cities demanding that Lukashenko should go, following Saturday’s women’s march. In the lead up to the demonstrations rhetoric from the Lukashenko side was again stepped up, and if for several weeks the police have held back, now arrests are widespread. Over 440 were detained over the weekend, with police and army vehicles mobilised across the country. During the last week gangs of ‘tikhari’, plain clothed and masked thugs from the KGB and police have roamed the streets, attacking with sticks any groups gathering to protest.

New methods of struggle are appearing. In the numerous courtyards, training is taking place to provide self-defence for the demonstrations. Now groups of demonstrators are often seen with youth at the front linking arms. On Saturday’s protests women defended themselves by linking arms in front of shopping centres while riot police desperately tried to drag those arrested out.

Both the ‘tikhari’ and the ‘cosmonauts’ — the riot police in full helmeted gear — are only strong in their anonymity. Protesters now try to rip the masks of the police when they are attacked. One media resource has released a database of the riot police with names and addresses, which it had threatened to do if police violence didn’t cease.

The biggest turning point in the struggle was when, one after another, workforces across the country came out on strike, some for an hour, others a day demanding that Lukashenko goes. The regime was forced to step back, ceasing police violence and torture within the prisons. 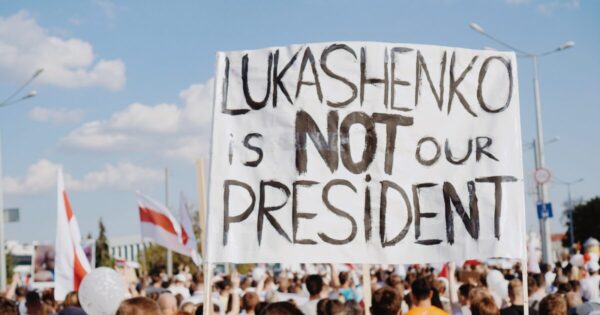 The working class demonstrated that it had the power to stop the country. Strike committees were announced in some enterprises, but for now this movement has not developed to its logical conclusion — the removal of Lukashenko and his clique from office and the establishment of a new government defending the interests of the working class.

There have been cases of mass resignations from the state sponsored trade unions but the strike committee structures are very nebulous, putting forward demands barely distinguishable from the general opposition. This has allowed the opposition leadership, the unelected ‘Coordination committee’, to use the working class to further its demands without allowing it to develop an independent role.

The independent unions that do exist are influenced by the international trade union bureaucracy. They say trade unions should participate in ‘social partnership’ projects and enter negotiations with Lukashenko. Even in conferences that have taken place during this tremendous movement, members of the independent unions discuss their tasks as preparing for future organization, rather than posing clear demands for mobilization today.

When workers returned to work, they faced massive repression in the workplaces. As one commented: “People are made to work under threats. The most active have been sacked. They even threaten physical violence against the families of those who spoke in support of the strike, they have leant on us from the management and from the trade unions… they have no morality left. But they can’t get away with it. It is not necessary for the whole factory to stop work for a strike to be effective”.

In the Zhlobin sugar refinery, management sacked three workers, who happened to be responsible for starting up the processors, so the whole plant couldn’t work. When they were replaced, suddenly equipment started to break. Ten were sacked from the Minsk car factory and the conveyor stopped. Then the atomizer for the spray system broke and cars had to be hand-painted. Now it takes a week to produce as many cars as were made in a day before. The more they pressure the workers, the more conveyors break down or electricity sub-stations catch fire. In the mines in Western Belarus, workers are going underground, but somehow production plans are not met and contracts not fulfilled. One miner, Yuri, became a national hero when he went underground and handcuffed himself to equipment. Now others are following suit.

This is the paradox of the current situation. The masses are prepared in huge numbers to take great risk, facing arrest, beatings, torture and the loss of their jobs to protest against Lukashenko’s authoritarian regime. Many argue that spontaneity and self-organisation are positive features of the movement, which they are. Indeed, social networks are full of individual blocks of flats arranging their participation in the next acts. But this leaves the movement without either a strategy for victory, or a plan for what follows the overthrow of Lukashenko.

The ‘coordination council’ initiated by Svetlana Tikhanovskaya, the candidate who ran, and won against Lukashenko, supported by self-appointed businessmen, media consultants and former government ministers claims it is the ‘only representative organ of Belarusian society … established with the aim of overcoming the political crisis and ensuring agreement in society, as well as protecting the sovereignty and independence of Belarus’. It is, however, not elected and its leading figures have either been arrested or have fled into exile. Many protesters if asked, would support Tikhanovskaya as President, but they do not look to her, or the Coordination Council as a whole, for leadership.

Its main work now is to lobby Western interests for support. The three Baltic states bordering Belarus have declared sanctions against Lukashenko and his supporters. In part this was to pressurize the EU to take firmer measures. The EU plan was to exclude Lukashenko himself from sanctions, with the hope of dialogue with him, and for fear of alienating Russia even more than it already is. Although in a non-binding vote, the European Parliament called for sanctions, Cyprus has blocked the decision until the EU agrees to sanction Turkish officials too. 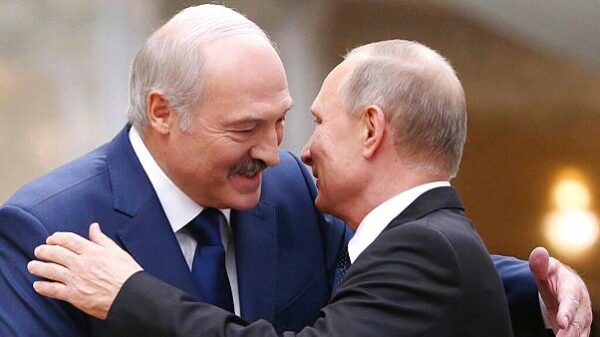 Lukashenko has sought firmer support from Russia. In a meeting with Vladimir Putin in Sochi, Russia has agreed to bail out Belarus with $1,5 billion, not enough to cover the country’s $8 billion debt, and to conduct joint military exercises within Belarus. Other parts of the agreement are being kept secret, but are likely to mean Russia participates in the privatisation programme. After years of prevarication, Lukashenko seems to now accept a more robust “Union agreement” between the two states, effectively giving Russia a high degree of control.

Russia desperately wants to keep Belarus as a friendly nation to act as a buffer between it and the EU and NATO. At the same time, if protests in Belarus continue, they can inspire the growing opposition mood within Russia itself. It does, however, want to avoid, if possible, a brutal crackdown by Lukashenko as this would lead to further isolation of the two countries.

Plans however are one thing, what actually happens is another. The level of aggression used by Lukashenko against the opposition is growing. The opposition has stressed that the protests are neither “pro-EU” or “anti-Russia”. The Belarusian people have always been close to the Russians, a rift in relations only appeared when Russia intervened in Ukraine. Lukashenko saw this as a threat to Belarusian sovereignty. Significantly throughout these protests EU or Russian flags rarely appear.

But now many Belarusians think Russia is propping up the unpopular dictator. Tikhinovskaya has openly warned that if she was in power the agreement between Putin and Lukashenko would be ignored. Although she is an accidental leader of the opposition, she reflects the mood of the masses more accurately than the openly pro-capitalist figures, backed by the EU. While they argue for negotiations with Lukashenko even allowing for elections with his participation, Tikhonovskaya argues that the whole point of the protests is to get rid of Lukashenko and his clique completely.

If there is a major escalation of aggression by Lukashenko backed by Russia, a pro-EU mood in the country could quickly grow. Far-right nationalism has not had a strong base in Belarus, but in this situation using the self-defence squads as a base, it could develop.

A strong left alternative intervening with proper demands and a strategy to win is needed to fill the massive political vacuum that now exists. The fact that so many people have demonstrated that they are no longer afraid has encouraged many people, who for years have suffered repression and discrimination in silence, to join the mass movement. Victims of domestic violence have been flooding womens’ support groups, well organised groups of LGBT activists have participated in the protests. But those organisations that do exist find themselves overwhelmed.

The so-called left don’t even try to intervene. Those around the neo-stalinist groups argue that Lukashenko has retained a large element of state ownership and that the country has almost prospered under a form of state capitalism. Leaving aside that average wages in Belarus are about half of those in neighboring Ukraine or a quarter of those in Poland, workers have suffered as Lukashenko has conducted a mass privatization programme using ‘golden shares’ to maintain state control, introduced brutal pension reforms and a tax on the unemployed and put workers on precarious annual contracts. Now, following his agreement with Putin, privatization will be more brutal with Russian capital taking over.

The non-stalinist left which claims to have supporters in both the “Just World” Party and the “Green Party” argue that it is too dangerous to intervene in these movements. Both groups have begun looking to Russia to resolve the situation.

But there are good activists looking for a way forward. Organisation is needed on the demonstrations to raise a clear socialist profile.

Self-defence needs to be coordinated on an internationalist basis, defending the right of self-determination of Belarus, while opposing attempts to divide people on nationalist lines. Links need to be built with work collectives and university groups. The current deadlock can only be broken for the benefit of ordinary people if there is a return to independent action by the working class through strike action.

Calls for Lukashenko to go and all political prisoners to be freed need to be linked with demands for an end to privatisation, the contract system and pension reforms, as well as to restore free and quality health care and education. The working class should place itself at the head of this struggle, establishing a democratic and accountable national strike coordination. This would provide the basis for forming a mass workers party with a socialist programme, presenting candidates in coming elections as well as convening a constituent assembly at which elected representatives of all working people can decide how Belarus should be governed democratically in the interests of the working class, a democratic, independent and socialist Belarus as part of a wider federation of democratic socialist states.