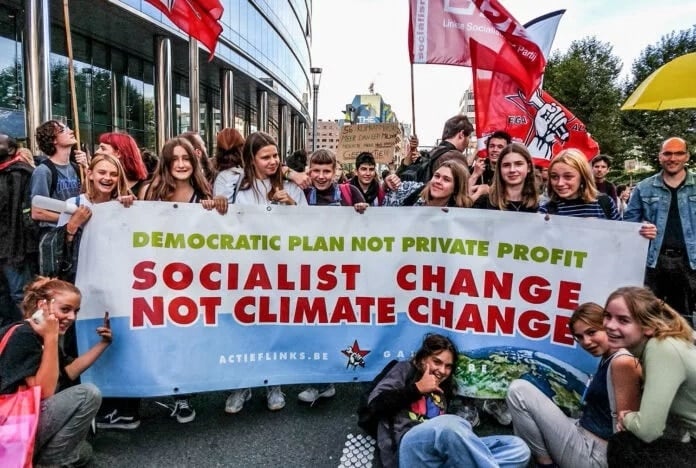 Mass anti-capitalist mobilization for the COP 26

The next global day of climate action takes place on March 19 and ISA will as always be a part of it. The new global climate movement has become the biggest youth movement since the 1960s. It reached its peak, so far, in the gigantic climate strikes of September 2019. It is very remarkable that two years after the first global climate strike, parts of the movement are still active, especially given the extra difficulties presented by the pandemic, such as isolation and restrictions on public gatherings. This shows that especially the young generation understands the increasing severity of the climate crisis and the urgent need for radical change, but also its deep distrust and anger towards the system.

The need for the movement to continue, and for a resurgence in 2021 could not be clearer. Despite the impressive mass mobilizations of 2019, which have had a huge impact on peoples’ consciousness regarding climate change, and the recent dramatic displays of the horrible consequences of the climate crisis — the droughts in Africa, the bushfires in Australia and California and the typhoons in Southeast Asia and hurricanes in the Americas — the ruling classes have not even come close to delivering the necessary changes.

As a result, an important and growing part of the movement increasingly understands that the capitalist rule and mode of production are the root of the climate and environmental crisis. This understanding is reflected in increasingly radical forms of protest. This needs to be filled with more radical, that means anti-capitalist and socialist, content and a strategy to rebuild the movement in 2021. In this process, it is key that the movement steers clear of being co opted by established (including “Green”) parties and NGO-style tactics, and instead focuses on grassroots organizing and movement building.

The slogan for this global day of climate action — no more empty promises – is spot-on. Now it is the time, more than ever, to build the kind of political and economic pressure that can enforce the necessary changes. We saw the importance of workers’ economic strikes in the uprisings in Belarus, in Chile, in Myanmar and many other countries. The same goes for the climate: Fighting and striking for environmental and ecological protection in combination with social improvements is the most powerful method to win change. The historic victories of the workers movement, such as the 8-hour working day, women’s suffrage and democratic rights are cases in point. These achievements have not been won through being “not too radical” and appealing to media and policy makers, but by collective strike and protest action.

Many argue that changing the system is unrealistic and take too much time and therefore, we should focus on improving the system. However, while changing the system is undoubtedly a major challenge, solving the climate crisis within the limits of capitalism is straight out impossible. Under capitalism, companies must strive for the maximum profits, in the short or long term, which inevitably leads to the exploitation of human beings and the environment. To increase profits companies generally aim to i) increase their production and market share — the CEO of BMW said during the automobile sales crisis in the 1970s “there might be too many cars in this world, but not enough BMWs” — and ii) to reduce their costs. This means: pushing down wages, lobbying against higher taxes and more stringent environmental and labor protection measures or relocating production to countries with lower environmental standards and labor costs.

This dynamic, which is intensified through competition, cannot simply be overcome by nicer and more eco-friendly management. If the CEO of Shell or Apple suddenly decided to put the interests of workers, society and nature before private profits, they would soon not be CEO anymore. Green capitalism can certainly not solve the climate crisis. Instead, it is aimed at accessing new markets, getting a competitive advantage — “green” sells — and an attempt to restore the system’s legitimacy, to win back the trust of the young generation. So while we of course always fight for improvements in the here and now, we need to combine this with demands, fighting methods and a program that leads beyond the capitalist system — only a democratic socialist society allows for the changes necessary to solve the climate and environmental crisis.

Build the struggle from below — working class methods needed

As well as climate disaster, the capitalist system is also dependent on and further reproduces racism, sexism and other forms of oppression. There is not only no capitalism without racism, as famously stated by Malcom X, but there is also no capitalism without sexism, oppression, health or climate disaster. The answer to this multitude of problems and calamities is to overcome divisions by joining forces and linking struggles, as we are all part of the 99%, the ones who need to work to survive, the working class and other oppressed groups.

While the national ruling classes, who represent the interests of their national capitalist elite, cannot overcome international conflict and imperialist competition, our answer must be international. In many instances, we have already seen young people joining forces and building solidarity in the climate movement: many climate activists also went to Black Lives Matter, refugee solidarity and 8th of March protests. In the US the Sunrise Movement officially mobilized for Black Lives Matter protests, and recently, the Indian climate activist Disha Ravi, Greta Thunberg and others have supported the protest and strike movement of Indian farmers.

This points in the necessary direction — the climate movement needs to build cooperation and solidarity with other social movements. The next step now, is to build this cooperation and solidarity with the workers movement, not primarily through strategy meetings with the union leadership, but first and foremost through engaging with and supporting the existing grassroots organizations of the working class who are waging struggles already, for example in the social and healthcare sector. Working class people are not only most affected by the climate crisis, they are also the experts who know how to change production, so that it is sustainable and ecological and, most importantly, they have the power to stop the capitalist machine from running. The ruling classes try to play off jobs against the environment. Trade unions and shop stewards need to counter this lie by explaining that it’s not climate-friendly production but profit-driven exploitation that kills jobs and by linking the struggles together.

As part of a revival of the movement in 2021, an anticapitalist mass mobilization for the COP 26 (international climate summit) in November, with both a massive counter summit in Glasgow and mass protests around the world is key. Let’s use this global day of climate action now to take back the streets and to build the movement in the coming months around a set of anticapitalist demands that challenge the system and invite all social movements, especially the workers’ and trade union movement to come on board.

While movements in countries and regions will have their own specific demands, there are nevertheless some universal key points that we need to fight for by the movement globally. In an earlier article, we put forward seven general demands, which are still very much relevant; here we want to highlight two points.

The Coronavirus crisis has triggered the deepest economic crisis for 100 years. Instead of going back to “normal”, this can also be a chance to completely change what is produced and how. It has become obvious which sectors are important to society and which are not. While we need much more staff in health, education and public transport for example, we also need a reduction of the working day with no loss of pay. This would not only directly improve the lives of working class people, but can also help to bring down emissions and it would give people more time for political activities, culture and leisure time.

A good life for all while protecting the planet is certainly feasible, but to render it possible, we urgently need to take key sectors — such as energy, mobility and transport, social and healthcare, as well as agriculture and pharma — into democratic public ownership. We need to take the profit imperative out of the equation and instead put peoples’ needs at center stage and we need to replace market-chaos by democratic planning. The astronomical price hikes by Texan’ energy corporations in the past weeks and the conflicts around patents for Corona vaccines are only the most recent examples of the endless failures of the profit-driven market system.

To win these demands and much more, we need to win back the trade unions and build mass workers parties that uncompromisingly fight for the necessary environmental and climate protection measures as well as against unemployment, job losses and for social improvements. The money is there — let’s make the rich pay! This is the task of all of us, of young people, of women, of LGBTQI+ people, of Black, Indigenous and People of Color, of anti-fascists, of trade unionists — together we are the working class and the oppressed, together we have a world to win.