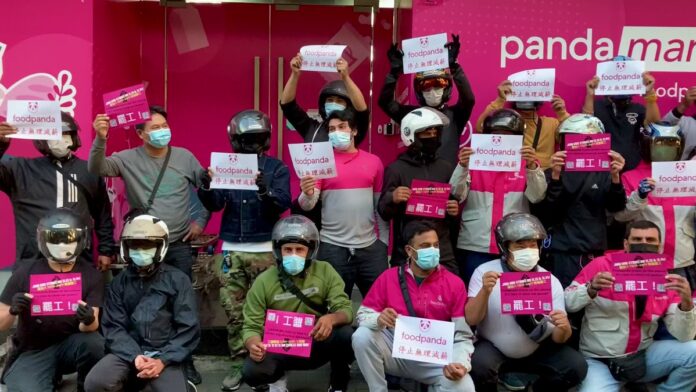 Foodpanda, a delivery platform in Hong Kong, is expanding under the epidemic, and business is booming, but Foodpanda delivery workers are not getting the fruits of their hard work.

Foodpanda has been introducing policies to reduce the wages of delivery workers throughout the year,” said Milkyo (pseudonym), a delivery cyclist who participated in the strike, to Socialist Action reporters. The company has never informed its employees of the pay adjustment. The company has recently accused him of not following orders well and he was suspended from working for 5 days. The company’s so-called appeal mechanism is very overbearing! Milkyo said that Foodpanda delivery workers are employed on a “self-employed” basis, without any benefits such as sick leave, work injury or retirement (MPF) protection, and the company downgraded his delivery performance after the accident.

John (pseudonym), another Foodpanda deliveryman, is a “foot soldier” (delivery workers working on foot). He said that the company has introduced a “twin order” price reduction policy, reducing the service fee for the second delivery order of the same housing estate, and also blamed the customer for the mischief of dumping the delivery after delivery or not having the address or the person after delivery, which John said is very unfair. “We have to use the Foodpanda mobile app to handle the delivery service, and each order has its own delivery time, and those countdown times are sometimes only a few minutes, so we have to deliver quickly, which increases the risk of traffic accidents and injury.

The strike of the delivery staff gathered in Tsim Sha Tsui and Kwun Tong Foodpanda offices and outside the Pandamart in many districts, the staff held up slogans saying “Stop unreasonable pay cuts” and “Foodpanda treats us like slaves! The demands also call for a service charge of at least $50 per order for “survival” and to offset the cost of maintenance and fuel for the motorcycle, and at least $35 for “foot soldiers”. In the past, Foodpanda has also unjustifiably dismissed delivery workers for fighting for employee benefits, showing how big corporations squeeze and shame their employees. As a result of the strike, the Pandamart supermarkets in many districts have stopped operating and workers say the struggle will continue. Last year, Deliveroo, another delivery platform, also risked a strike by cutting staff wages. In fact, as the delivery industry expands in the face of the epidemic, such companies are trying to squeeze their employees for profits in a highly competitive market, with worker protests breaking out in many parts of the world. For example, in March, riders from the Chinese delivery platform “Hungrymole” staged a cross-province protest against the company’s oppression of its workers, and at about the same time, Deliveroo employees in London protested against persistent low pay and demands for more reasonable wages.

Socialist Action supports the legitimate struggle of Foodpanda’s delivery workers, who need to act in solidarity to defend their rights at a time when labor protection in Hong Kong is virtually non-existent. This strike was mainly mobilized through online groups, but so far workers have not organized themselves into trade unions, which are also facing unprecedented attacks from the government. The strike on 13- 14 November has achieved an impressive level of action. But for a longer struggle informal online methods may be insufficient, showing the need for real union structures and organization even if this takes an ‘underground’ or informal form, to deal with the employer’s suppression of the strike.

All workers should show solidarity with the Foodpanda strikers. Should their struggle win improved conditions and pay this will be a victory for all workers. It will encourage others to organise and fight!