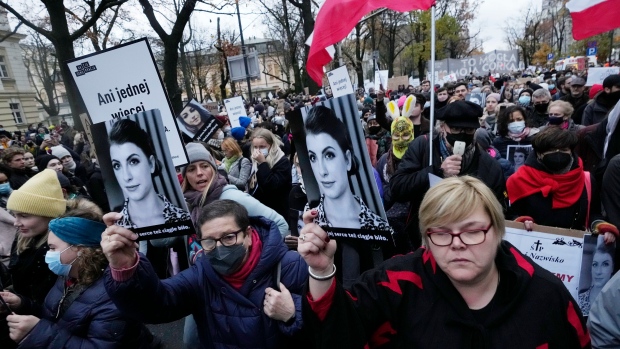 Solidarity and united struggle against the PiS government for the right to choose.

In September, a 30-year-old Polish woman, Iza, died as a consequence of the ban on abortion in case of fetal defect that was introduced at the beginning of the year. Her pregnancy was not viable but as the heart of the fetus was still beating, she was denied an abortion and died of septic shock.

After the death of Iza, thousands of demonstrators took to the streets of Polish cities. The public is outraged by the death, which could have been avoided, if it had not been for the war that PiS has declared on women. Unfortunately, this is not the only life taken or ruined since the so-called “compromise” of 1993.

While there is a general consensus not to lay down arms in this fight, the mood of the movement is now shifting to organizing grassroots resistance, including promoting underground abortions. This, of course, can only be a temporary solution. It will not allow help to be given to all women in need of abortion, especially in an emergency like in the case of Iza.

At the demo in Kraków a gynaecologist publicly encouraged his colleagues not to observe the abortion ban. This is a heroic stand by a health care worker against a government that does not allow him to fulfill his duty to help and save human lives. While some use the conscience clause (the right to refuse to perform an abortion even when it is legal, or even to refuse to prescribe contraception) to impose their views on their patients, many doctors would like abortion on demand and are appalled by the current law.

Health care workers have been in a months-long battle with the government to improve their working conditions. The government claims they only care about higher wages — it is an outrageous statement after all the sacrifices and hard work of nurses, doctors and paramedics throughout the pandemic! In reality, Polish medics are fighting for better medical care for all.

The reciprocal solidarity and support of the feminist movement and the striking health care workers may be crucial to success in the fight. The anger directed at those responsible for the “hell of women” (as the pro-choice describe Poland) could significantly strengthen the health workers’ movement, which has a powerful weapon in the form of the labor strike.

Currently, PiS is fighting on several fronts simultaneously — against women and health care workers, but also against workers of other public sectors like the teachers. Now it is also fighting against refugees, for whom many people living on the border have shown great solidarity and are giving aid. It is precisely this solidarity among workers that we need in order to win, uniting our forces against the government that oppresses all layers of the working class.

We cannot only count on PiS being removed from power to win full reproductive rights. For abortion to be available to all it must be free, in every hospital, and those hospitals must be properly funded. We will not achieve this with a liberal government — low wages and cuts will always limit the access to our rights.

We advocate socialism — a system where major industries and banks are socialized for production according to the needs of society as a whole, not the profits of a handful. Where profits are used to develop public services.

Capitalism is hell for women, not only through its unfair distribution of wealth, but also through the preservation of oppression that existed in previous class systems.

Unable to provide a decent life for every human being, it has maintained the institution of family based not on mutual love but on economic dependence. Another example of the ongoing oppression in this field is how many LGBTQI+ youth are unable to come out of the closet because they fear rejection from their families and homelessness if they are forced to leave the family home.

The economic dependence of women caused by capitalism makes it difficult for them to leave unhappy relationships and marriages. Domestic violence escalated further during lockdowns.

It is not in the interest of capitalism to end this situation. In a social system that reflects its economic principles of operation, everyone must deal with their own problems. We believe that, on the contrary, society should actively help people who need to get out of an abusive situation. This should be done by providing them with adequate mental health care, affordable housing and decent jobs.