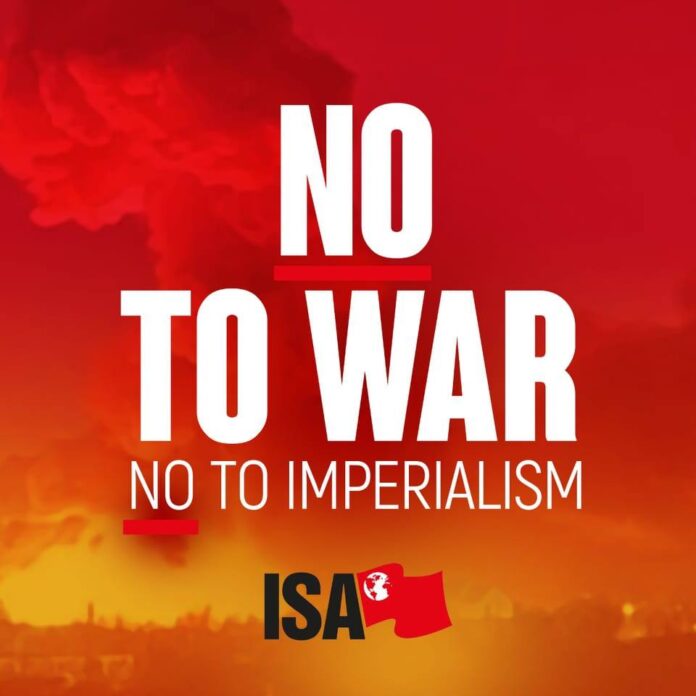 The war at a crucial turning point. What do socialists say?

The Russian army’s invasion of Ukraine has already led to hundreds of deaths and forced hundreds of thousands to flee. The Swedish government, with the support of the right, responds by sending weapons and crawling even deeper into NATO’s embrace. What do socialists say?

The weekend of February 26–27 saw several serious turning points in the war. Fierce fighting was going on and the UNHCR warned that 5–7 million people could be forced to flee. Putin threatened that Russia has nuclear weapons. The Western powers have in principle expelled Russia from the financial world. Germany’s Social Democrat chancellor Olaf Scholz said that the country’s military spending should be increased to two percent of GDP, to over 80 billion euro.

The EU is giving the Ukrainian government 450 million euros to buy weapons. A number of other governments, including Sweden, are promising weapons and military equipment. That means, for the first time since 1939, Sweden is sending weapons to a war.

Social Democratic left-wing debaters such as Daniel Suhonen raise the idea of Sweden, like Finland, potentially joining NATO. The changes take place in the blink of an eye, as a gigantic “shock doctrine” — ie. a major event that is used to drive through a drastic policy change in the interest of capital. The left, the labour movement and everyone who is against the war need a democratic discussion on these issues.

What can stop wars?

The Russian invasion has not been as easy as Putin had hoped. Opposition in Ukraine is massive, including local defense groups. Demonstrations in Russia against the war have grown, especially among young people. In Berlin, up to half a million gathered against the war.

The priority for the labour movement and anti-war movement internationally, as well as the left everywhere, is to provide humanitarian support to the people of Ukraine and maximum support to the resistance in Russia. Dissatisfaction with Putin’s regime was widespread even before the war. War and belligerence have historically been stopped by mass movements, revolts and revolutions, from the union struggle of 1905 which stopped war with norway to the Russian Revolution of 1917 which led to the end of World War I to the US retreat from Vietnam in which resistance to war in the United States became decisive.

What has led to the war?

Vladimir Putin is a ruthless despot, ready to crush all opposition and expand his sphere of power to Ukraine, Belarus, other neighboring countries and war zones, as in Syria. Putin’s regime is the result of decades in which global capital has freely run amok. The Stalinist system collapsed and was replaced by capitalist oligarchs. For a time, Putin and the West seemed to cooperate. For the peoples of the former Soviet Union, this meant a drastic reduction in living standards, including shorter life expectancy.

At the same time, new imperialist contradictions were built up. It involves a global power struggle — battles over strategic areas, resources and economics, what is today called geopolitics. Today’s world is increasingly dominated, politically and militarily, by the new Cold War between US imperialism and Chinese imperialism. Putin reckoned that the relative weakening of US imperialism after Iraq, Afghanistan, the financial crisis and the new Cold War would give him space, as was the case in Syria. But the war has not developed as he thought and the West has responded more harshly. His campaign will therefore be intensified.

The main victims of the war are the people of Ukraine, while the responsibility lies with the global capitalist system that created Putin and the hardening imperialist contradictions.

Has NATO changed its character?

NATO is the war alliance that bombed the population of the Serbian capital Belgrade for over 70 days in 1999, which also bombed Libya in 2011 and which led the war in Afghanistan from 2015. These war efforts were hidden behind phrases about democracy and nation building (even though the bombing of Belgrade lacked support from the UN). But, just as in Iraq, the bombing failed to pave the way for democratic rights. The result is clearest in Afghanistan, with the Taliban in power and a starving population. In Libya, NATO’s bombing war, with Swedish participation, resulted in the crushing of the popular revolt.

NATO is driving the global military arms race, with drastically increased military spending everywhere. NATO is led by US imperialism and acts in its interest. Opposition to NATO was formulated during a long factual debate in the Swedish labour movement and society. Socialists are fighting Putin’s war and at the same time continue to be against NATO.

Will arms deliveries — Swedish or from other states — ensure peace and freedom?

In the last 12 months, the United States has sent weapons worth one billion dollars (9 billion kronor) to Ukraine. Now there are drones from Erdoğan’s Turkey, missiles from Germany and body armor from the Swedish military. The Swedish military has previously trained Ukrainian soldiers. The Finnish Parliament and the Danish Parliament have unanimously decided to send weapons.

The fact that governments are now sending weapons to Ukraine is not happening for humanitarian reasons. We witnessed a stark demonstration of this in Afghanistan. Military operations were prioritized for over 20 years with devastating results.

The weapons now being sent may possibly slow down the Russian attack, but few believe it can decide the war; rather, it is a revolt against the war at home in Russia, mass protests internationally and a global workers’ blockade against Putin’s war machine that can have the greatest effect.

It is unlikely that the Western powers will deploy air force and soldiers, which would create a major war. But the pressure will grow for escalated efforts.

The fact that public opinion massively favours ending the horrors of war means that the governments can initially get support for weapons shipments to Ukraine. This will also be used for even greater investment in the military in country after country and for both Finland and Sweden to join NATO.

Do workers and the poor have common interests with governments, capital and the military?

The state is not neutral, it is ultimately a tool for the interest of the ruling class (capitalists). Socialists warn that armed military and police will be used against workers’ struggles and mass protests within their own country.

Foreign policy is a continuation of domestic policy. Unfortunately, several left-wing and workers’ parties throughout history have provided support for war and military intervention, with the result that they have thus also legitimized right-wing politics and deterioration within their own country.

The labor movement emerged in the fight against militarism and war. A shining example of this is when the Swedish labour movement managed to stop the plans for war against Norway in 1905, using the slogan “Down with the weapons”. When the social democratic leadership promised social peace (support for the government) during the First World War, the left and the youth union responded with a campaign against the war.

How should the people of Ukraine defend themselves?

President Zelensky is a populist right-wing politician who does not represent the interests of the Ukrainian people. His government has reduced taxes for big business while the standard of living for most workers has continued to fall. Many Ukrainians want a popular defense, and thousands have been mobilized, even with homemade weapons. Several videos show how people appealed to Russian soldiers not to shoot and causing some tanks to turn back.

In the terrible ordeal that the Ukrainian people are now facing, despite the need, is there a way through a continued political struggle, to take matters into their own hands? The defense committees that are now necessary to continue the fight to resist what appears to be a Russian occupation require democratic organization and coordination from below. A NATO-led Ukraine is not a democratic or fair alternative.

For an anti-war and anti-imperialist movement against the war

For socialists, even in war, the starting point is always what benefits workers, the poor and ordinary people. The best traditions of the labour movement are to resist war and militarism, to have an independent line — not to ally with the right, capital and the state.

Regardless of the development of the war over the next week, everything and everyone will be affected for a long time to come: consciousness, power relations and the economy. For all who are against the war, it is important to analyze and mobilize against the war and the global capitalist system.