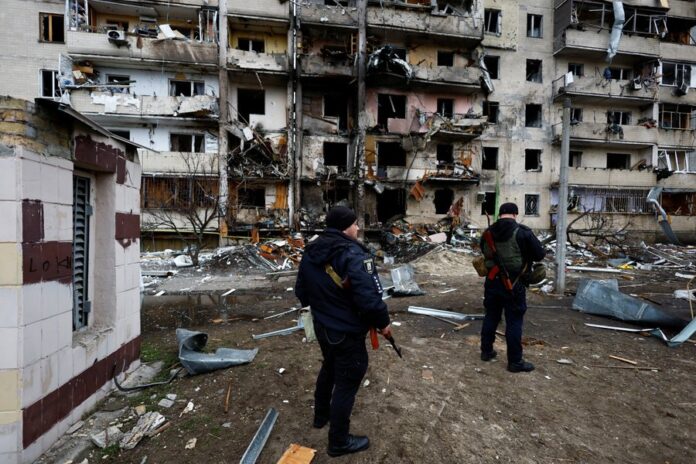 The Putin regime’s war against Ukraine has entered its fourth week, and the number of victims is growing. Despite repeated talks and a number of different attempts at mediation, the war has continued and expanded.

The main victims of the war are the Ukrainian people. In besieged Mariupol alone, 2,500 civilians have been killed. In Kharkiv alone, 600 buildings are reportedly destroyed.

Three million have been forced to flee the country. Half of them are children. In addition, there are 2–3 million internal refugees.

The country’s cities and economy are being laid in ruins. Even before the war, as a result of the catastrophe of capitalist restoration, Ukraine was Europe’s second poorest country with a rapidly shrinking population (since the early 1990s when capitalism was restored, Ukraine’s population has shrunk by about 300,000 per year).

Not according to Putin’s plan

The Putin regime has been surprised by the strength of the resistance it has faced in Ukraine and the fact that the invasion war has not developed as the new tsar had anticipated. Russian forces still only claim to have conquered one of the 20 largest cities, Kherson; where, moreover, open air protests against the troops have taken place. In most places, Moscow’s forces have not advanced in the last week. Kyiv, Kharkiv and urban areas have been subject to intense continuous bombings and missiles. The Russian air force has almost not been used and the Ukrainian air defense seems intact.

The Russian missile attack which targeted arms and equipment sent to Ukraine by Western powers on the ​​Yavoriv base close to the Polish border, killing 35 and wounding 134 according to the Ukrainian government, increased speculations about an expansion of the war. President Zelensky said it was a question of time until neighboring countries would be attacked by Putin. So far, however, the Western imperialist leaders have refused requests for a No Fly Zone, with Biden stating it would mean World War 3.

The development of the war could result in the Kremlin opening up for mediation and a “negotiated solution”. Aleksey Arestovich, advisor to Zelensky, on Tuesday 15 March predicted a deal to end the war within 2–3 weeks or, at the latest, in May. Zelensky himself has opened the way for Ukraine to declare itself neutral (one of Russia’s demands). He explained that since US imperialism and other Western powers have made it clear that “we cannot enter. And it is true, and it must be acknowledged”.

For now, other demands from Putin, for the recognition of Crimea and Donbas as Russian, will not be accepted by Kyiv.

For the ruling class, diplomacy and negotiations are a continuation of the war but by other means. That is, behind the “willingness to negotiate and compromise” is the new map of geopolitical and power relations that the war has created. On that basis, no lasting peace can be created. Every possible settlement risks being followed by continued war policies and attempts at new territorial conquests, as well as continued disintegration as in present-day Bosnia.

It could also be that a deal is reached which is then completely ignored like the Minsk Agreements 2014–2015, which was supposed to provide peace in the Donbass in eastern Ukraine, but which none of the signatories felt bound by, meaning that the area remained a war zone.

Western imperialism has responded to the war with an increased military presence in countries mainly in the Baltics and Eastern Europe, and the most powerful military rearmament in decades, and introduced the toughest sanctions packages ever. The total number of sanctions that the governments in the West have decided to introduce amounts to around 5,800 — against no country have so many sanctions been introduced before.

On top of state sanctions, more than 330 companies have decided to cease their operations in Russia or to suspend them, among them McDonald’s, IKEA, Visa and Mastercard.

The sanctions hit mainly ordinary people in Russia who are losing jobs and savings as the country’s economy is now rapidly collapsing. Kremlin propaganda will portray the sanctions as war against all Russians, fitting into their overall attempt to justify the war. This is combined with increased repression against any opposition to the war. New laws that order 3–15 years in prison for “fake news” about the war have been approved. The repression has had a effect, with smaller protests last Sunday than the previous week, despite widespread discontent beneath the surface.

The Ukraine war is a crucial turning point in world developments. The world order established after the collapse of Stalinism in 1989–91 has been blown to pieces. “There is no doubt that in the violent, tumultuous days after 24 February, the established international order has been shaken and, in some respects, upended in extraordinary, unexpected and often unwelcome ways,”, the British Guardian summed up on 12 March.

The war in Ukraine is the first in the era of the new Cold War where the great imperialist and increasingly militaristic powers and blocs — Russia, China and the United States, NATO and the EU — are in direct confrontation with each other.

For Xi Jingping’s dictatorship in China the war has added another huge crisis on his agenda. Following the “no limits” partnership with Russia announced during Putin’s visit to the Beijing Olympics, Beijing has pretended to show a “neutral” position. For Western Imperialism, the sanctions and actions against Russia are a clear warning to Xi.

As a result of the war, a deepening inflationary shock to the world economy looms and global capitalism is thrown back into stagflation — inflation and stagnant growth. This has similarities with the situation in the 1970s and 80s, but takes place against the background of a much more charged and dangerous world situation. As well as energy, food prices are exploding, hitting neo-colonial countries and the poor worst.

Ukraine has enormous resources, which have been looted and embezzled by a corrupt domestic elite that has drawn support from either Moscow or the West over recent decades.

When the country’s current president Zelensky last year attacked some of Ukraine’s super-rich “it was part of building his own power base and building bridges to Washington”, the think tank European Council of Foreign Relations wrote in June 2021, adding that the president’s actions did not constitute a “real campaign” to break the oligarchs’ grip on the country.

Ukraine’s workers and poor have the right to defend themselves. We have already seen some isolated reports of mass action from below (sometimes armed ) within Ukraine, showing that there are conditions for forming a popular defense force based on mass organization, independent of the Ukrainian elite, all bourgeois groups and Western imperialism.

A precondition for the right of the Ukrainian people to decide their own future is that the Russian troops, immediately and unconditionally, are withdrawn. But not to be replaced by NATO troops and for Ukraine to become a country devoured by Western imperialism.

The Ukraine war has sent an eerie warning about what threatens humanity unless the world’s workers and poor can be united in a struggle to create a socialist world free from all oppression and violence.

Only the independent organization and struggle of the workers and the poor can secure peace and put an end to the imperialist power struggle that threatens to set the world on fire.

Build working class resistance to the war, in Ukraine, Russia and all over the world

Stop the war — out with the Russian troops.

No to NATO militarism and imperialism.

Global struggle for socialism — become a member of ISA.