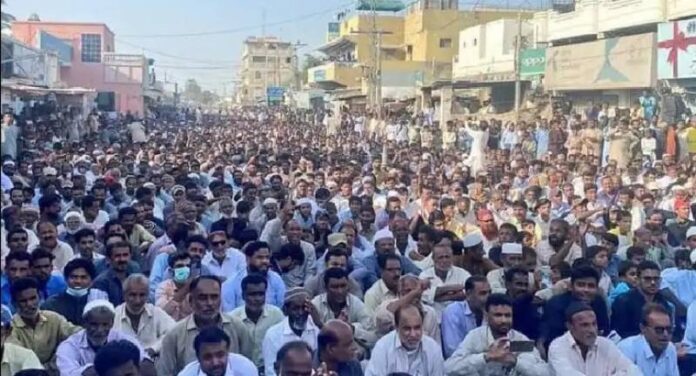 In 2017, the Belt and Road Initiative (BRI) was hailed by Chinese dictator Xi Jinping as “a project of the century”. The promise was to spend more than $1 trillion on infrastructure projects across the neo-colonial world to secure access to key markets and carve out spheres of Chinese influence. But the message from Xi’s regime today is much more subdued. The BRI is no longer seen as an economic trump card and increasingly Beijing is being forced to scale down its ambitions.

[The outbreak of the Ukraine war, after this article was written, has plunged Eastern European BRI projects into great uncertainty, with China probably forced to choose which investments to save and which to sacrifice].

After the 2008 world financial crisis, China’s massive state-backed credit boom resulted in an economy with unprecedented levels of overcapacity. For example, by 2016 the steel industry in China had more than 300 million tonnes’ worth of unused capacity, equivalent to three times the output of the world’s number two steel producer, India. Excess production and blind unplanned expansion caused prices to fall and profits to flatten. Chinese capital needed to find higher returns outside its borders. The solution was the BRI, a gigantic infrastructure and investment scheme which has grown to embrace 140 countries.

In Hebei, China’s main steelmaking region, some of the surplus steel capacity was moved to Southeast Asia, Africa and West Asia. Huge overseas construction contracts were drawn up to satisfy the needs of the Chinese construction sector. In Thailand, China’s Delong Steel is building a 600,000 tonne-per-year steel mill in which it will hold a 55 percent controlling stake. The needs of Chinese capitalism have driven the so-called Communist regime (CCP) to play a more assertive role internationally.

China has become the world’s main creditor and exporter of capital, creating a form of extreme debt dependency in debtor countries. Worldwide, China accounts for 65 percent of official bilateral debt and the ‘hidden’ debt is even higher as many countries borrowing from Chinese private banks have to sign confidentiality clauses. Of course, so-called ‘debt trap diplomacy’ is not a Chinese innovation – the US and other Western imperialist powers have used debt as a tool of economic control over the neo-colonial world for much longer. For workers and the poor this debt burden means endless misery, poverty and exploitation, regardless of which imperialist flag it flies under.

The BRI’s lending for infrastructure projects has fallen 54 percent from 2019 to last year. In Africa, a key battleground in the new inter-imperialist Cold War, new lending from China fell from $11 billion in 2017 to $3.3 billion in 2020, according to a 2021 report from multinational law firm Baker McKenzie.

Pakistan, where China’s biggest BRI investments are, has seen a number of BRI projects stall. The country’s central bank reported a 50 percent decline in Chinese investment between the second quarter of 2020 and the same quarter 2021. Among the stalled projects is a $6.8 billion upgrade to the Karachi-Peshawar rail link, a vital component of the China-Pakistan Economic Corridor (CPEC). The CCP announced CPEC in 2015, aiming to connect China’s Xinjiang province to the Arabian Sea, with 2,000km of road and rail links leading to what was once the small port town of Gwadar in Balochistan. China is transforming Gwadar into one of the world’s biggest ports. It was the scene of militant mass protests in 2021, which in part reflected discontent that China’s investments in the region have not benefited the local population but rather worsened their conditions.

Running out of steam

BRI infrastructure projects are built and largely controlled by Chinese companies, financed by loans from Chinese capitalists and employ mostly Chinese workers and technicians. These are not for charity, but rather investments that go back into the Chinese economy in order to more efficiently extract and transport natural resources. Another significant portion of this money is transferred to the ruling elites in these countries to help buy elections and ensure a pro-Beijing stance.

The slowdowns, delays and rising tensions over BRI projects have been exacerbated by the Covid-19 pandemic, which has left many poor countries unable to repay loans. But ultimately this also signals the limits of Chinese capitalism as it faces long-term stagnation and shoulders a staggering and unsustainable 335 percent debt-to-GDP ratio. The BRI is running out of steam, and with it, the CCP is under pressure to scale back.

Yet, as already stated, the BRI is crucial for the survival of Chinese capitalism. This is because in a world of decoupling supply chains and rising protectionism, Chinese capitalists have to secure as many foreign markets as possible. A key factor is China’s lagging domestic consumption rate, still lower as a share of GDP than in the year 2000. Since the start of the pandemic, consumption has suffered a severe blow and has still not recovered. This year could see further downward pressure on consumption as a result of CCP policies, starting with the pay cuts of 20-30 percent for government employees in many regions, caused by the financial difficulties of many local governments. These problems will be exacerbated by the new Cold War, leading to increased austerity for workers as the Chinese regime’s resources are focused on military and economic competition with the US and Western capitalism.

For the CCP dictatorship, the BRI and major infrastructure investments like Gwadar and CPEC are also prestige projects to showcase the superiority of the “Chinese model” of capitalism and counterpose this to the unwillingness of Western investors to enter Pakistan and restive regions like Balochistan, partly on security grounds. Here, there are some similarities with the Chinese state’s neo-colonial exploitation in Xinjiang, which combines state repression with apparently rapid GDP growth. In Gwadar, military repression is provided by the Pakistani state against the indigenous population, where a significant independence movement has developed. Military forces in Balochistan have been increased many times over, along with extrajudicial disappearances and other human rights abuses.

As part of CPEC, billions has been spent in Balochistan, building a 300-megawatt coal power plant, an international airport, and the port in Gwadar. Despite this, the local Baloch community in Gwadar still lacks access to clean water, electricity and other basic facilities. The influx of fishing trawlers including Chinese-owned boats has also cost many Gwadar fishermen, who the local economy depends on, their jobs.

“Most of the companies which are involved in the destruction of the local fish trade and ecology of the Baloch Sea are co-owned by retired Pakistani military generals and Chinese nationals,” said Jamal Nasir Baloch of the Free Balochistan Movement.

For several weeks in the autumn, local people launched a fightback against the looting of the region’s resources by the Islamabad government and Beijing. These protests saw majority women demonstrators occupying the entrance of the Chinese-controlled Gwadar port and a main highway. Numbering hundreds of thousands on some occasions, the demonstrators demanded jobs, clean drinking water, improved health and education facilities, rights for local fisherfolk and a ban on deep-sea trawling. The protest movement was dominated by the right-wing Islamist party Jamaat-i-Islami (JI) with close links to the politically important Pakistani army. This party used the protests as a platform to build up its prestige and increase its bargaining power within the country’s ruling elite, and to trump the influence of Balochi nationalist and pro-independence groups. Some of the latter were arrested despite the fact they did not initiate the protests.

This impressive mass movement seems to have lacked the decisive input of independent workers’ organisations and a socialist program crucial to the fight against Chinese imperialism and the Pakistani ruling class. The JI leaders ironically have a pro-China track record, which of course was not featured during these mass protests. At one point the protests threatened to pick up the issue of China’s control of Gwadar port, through a 40-year lease that grants China a 91 percent share of all revenue. But the JI leaders only aired this issue as a bargaining chip to get the Pakistani regime to make concessions on the trawler issue and some of the other main demands. Despite shortcomings in leadership and program, this movement sent a powerful warning of the discontent that is brewing along China’s Belt and Road.

Similarly in Laos, where China last year opened a US$5.9 billion high-speed railway, the local people are being left out of the equation. The railway seeks to connect China to big markets in Thailand, Vietnam, Malaysia and Singapore, with Laos as a “flyover country”. The 422-kilometer railway only has 21 stations in Laos, which hardly suit the needs of a country where 61 percent of the population are farmers. As one analyst put it, “This is essentially a Chinese public infrastructure project that happens to exist in another country”. Worse, the debt incurred to build the railway could be up to one-third of Laos’ GDP, and yet the Laotian one-party dictatorship only holds 30 percent of the railway’s shares, with the rest owned by Chinese enterprises.

What would actually benefit Laos would be regional railways and roads to connect local farmers to distribution centres, not massive land-grabs for a railway that only really serves Chinese capital and Beijing’s regional ambitions. Infrastructure is not by default good: we must ask infrastructure for who?

There is more bad news for the Laotian railway from across the border in Thailand. The Thai government, which signed multiple BRI deals following the 2014 military coup, is now partly tilting away from Beijing back towards US imperialism. It is also hesitating over going ahead with some BRI-designated railway projects which are needed to connect Laos in the north with Malaysia in the south. Thai backsliding could break-up the masterplan for a China-to-Singapore rail link, rendering the Laos railway even more of a white elephant.

The ramping up of the new imperialist Cold War has seen the US and EU launch their own infrastructure investment schemes in an attempt to rival China’s BRI. Both rival schemes are rather lacklustre. The EU’s Global Gateway plan has a tentative budget of €300 billion, but has drawn a lukewarm reception because “the EU’s coffers are not as wide as China’s” and it is “grossly late” according to a report in France24. Similar questions hang over President Biden’s Build Back Better World (B3W) initiative.

The inability of US and European imperialism to conjure up a trillion dollars as the BRI did back in 2017 demonstrates the new instability facing world capitalism as a whole. As outlined in ISA’s ‘Age of Disorder’, the historically high spending from states to combat the economic effects of the pandemic has skyrocketed global debt levels to a record $226 trillion US dollars (according to the IMF). This debt load is crushing the ability of all the capitalist governments including China to fund massive imperialist spending packages abroad.

The inter-imperialist Cold War is heating up, yet global capitalism is looking more and more unstable. This can only mean further attacks on the lives and rights of working people globally, in order to fund China-US military and economic brinkmanship. The world is again dividing into different blocs, where the working class of oppressed nations will be caught in the crossfire. The only way out is an international socialist solution, to oppose both imperialist blocs and fight to overthrow capitalism by establishing a democratic, globally-planned socialist economic system.