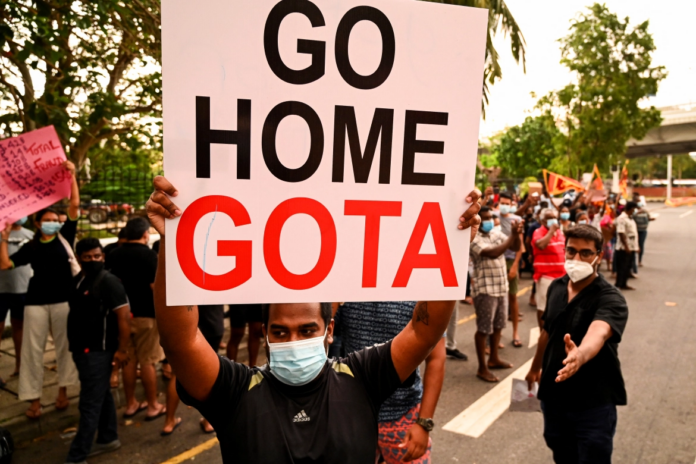 After weeks of mass protests, strikes, and general strikes across Sri Lanka, which included earlier this week an elementary explosion of popular fury at the country’s ruling elite following a violent attack perpetrated by armed pro-regime thugs against the ‘GotaGoGama’ occupation in central Colombo, President Gotabhaya Rajapakse appointed Ranil Wickremesinghe as Prime Minister on Thursday. This is to replace Gotabaya’s elder brother Mahinda, whose political downfall and hasty evacuation from the city by the military on Monday was precipitated by the mass movement and the storming of his official residence by thousands of angry protesters.

Wickremesinghe is the leader of the old right-wing United National Party (UNP) and the only remaining legislator for this party, which was electorally wiped out at the last general elections in August 2020. He didn’t even win the elections in his own constituency, but got his parliamentary seat through the proportional representation system that allocates parties a certain number of seats based on the total votes polled. Five times Prime Minister before, he is praised for his governing skills in bourgeois and Western imperialist circles, but his political credit and authority among the working and poor masses of Sri Lanka is wafer-thin.

Importantly, Wickremesinghe has also close ties to the Rajapaksa clan and to those in the Sri Lankan army accused of mass atrocities against the Tamil people, for which he has explicitly rejected any accountability. He has in the past protected state officials from being dragged in front of the International Criminal Court and once even claimed that he had “saved Mahinda Rajapaksa from the electric chair”. He favours the continuing militarization of the Tamil north and east provinces and the Sinhalese-Buddhist dominance of the country’s state, and has vowed to ensure that Buddhism would continue to hold the “foremost” place in the island’s constitution.

Economically, he is a typical free-marketeer, whose now decimated party played a critical role in the imposition of neo-liberal policies in Sri Lanka over decades, the same policies which have laid the groundwork for the current economic disaster. He was a sitting minister in the Jayawardene government that crushed the historic general strike of 1980. He is a staunch supporter of the IMF, an architect of the setting-up of the country’s super-exploitative Free Trade Zones, and has been vocally arguing for weeks for additional cuts in public expenditure, further increases in fuel prices, and other drastic austerity measures. The news of his appointment was received with hardly disguised reservations from the Chinese regime, as Wrickremesinghe has also more US-leaning views than his ousted predecessor.

Foreign creditors, international diplomats, and the Sri Lankan big business community have expressed cautious hopes that after the dramatic incidents that took place earlier this week, the huge deployment of military forces, and the appointment of the “new” Prime Minister, some semblance of political stability can be reached, a bail-out with the IMF can be secured, the masses can be pushed off the streets and the working class back to work.

This is wishful thinking. The hatred of the Rajapaksas is running deep across the lengths of the country and the masses, burdened by catastrophic economic conditions, will not settle for a change of the façade. While the regime might have bought itself some temporary respite, there is a largely shared feeling that any decision that comes from Gotabaya Rajapaksa is a maneuver aimed at protecting the “family jewels” and allowing the ruling dynasty to escape scot-free for their crimes, loot, and corruption.

A weak prop for a weakened President, it is not guaranteed that Wrickremesinghe will even be able to put together a government that can secure a majority vote in the Parliament; if he does, it is unlikely to last. He has few backers other than the ruling SLLP, and opposition parties and MP’s are under huge pressure to resist any arrangement that keeps the hated Gotabaya as President. The fact that many regime loyalists have seen their sumptuous villas and cars burnt to ashes is likely to act as a deterrent to get them too enmeshed with an administration tailored by Gotabaya himself — who has already sworn in four members of his own party into it. The largest parliamentary opposition the Samagi Jana Balawegaya (a 2020 split-off from Wickremesinghe’s UNP), like most of the opposition parties, have insisted they will not enter an interim government unless Gota resigns — although the pro-capitalist SJB, who shares Wickremesinghe’s pro-IMF agenda, also made clear that as a “responsible opposition” it would be supporting the new government in its efforts to tackle the crisis.

After the humiliating failure of the Rajapaksa regime’s attempt to undertake the crushing of the mass revolt, the revamped establishment will now be trying to get a hold on it through a mixture of carrot-and-stick methods. Already, a committee has been appointed to “ensure the protection” (read: the political recuperation) of the ‘GotaGoGama’ protest site (a committee that includes the mayor of Colombo and representatives from the police and the army!). Ranil has called for the arrest of the perpetrators of the attack on ‘GGG’, but is now working under the executive command of the perpetrator-in-chief’s own brother, and the only people who have been arrested so far have been scores of youth who retaliated in self-defense against that attack.

The heroic movement of the workers, poor and young people of Sri Lanka should place no trust whatsoever in Ranil Wickremesinghe nor in any government cobbled up from above. They must rely on their own struggle — the only language that the ruling class has been forced to listen to. There should be no doubt that if the trade unions had gone full steam ahead with their threat of an open-ended ‘Hartal’ (i.e., a full general strike with closure of all small businesses), rather than prevaricating at the last minute as they did, Gotabaya and his lot would already be history.

The masses should fight in their workplaces, factories, communities, villages and plantations to put this threat into action until “Gota goes home” — and the whole system with him. To prevent the hijacking of their struggle, resist the militarisation drive and all attacks on democratic rights, and fight for the urgently needed betterment of their living conditions, they should form their own local action, strike and self-defense committees, and link them up across the island. Independently from all pro-capitalist and chauvinist parties, they should organize the struggle for a socialist future: a future whereby the island’s wealth is democratically produced, controlled and planned according to needs, and where all communities can live fully away from the fears of violence and oppression.