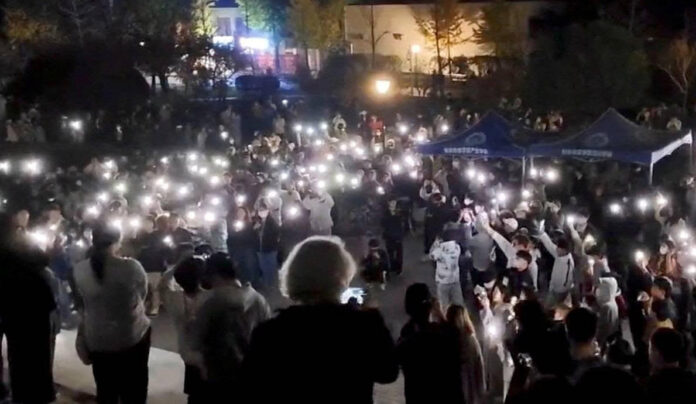 The mass protests of November 2022 have changed China. Whatever happens in coming weeks, everybody now knows how much hate and anger there is against the CCP dictatorship. The biggest police surveillance state in history can no longer hide the truth. The dictatorship will only face even bigger mass opposition in the future.

The protests ripped across China from Urumqi to Shanghai and Guangzhou to Beijing. Students in at least 85 universities staged protests demanding “freedom”. This is the first nationwide protest movement to hit the CCP dictatorship since the 1989 Democracy Movement. Now we see a revolt among young people and young women, among Han and ethnic minority people and workers, which is the most serious challenge to the dictatorship since 1989.

The inhuman Zero Covid lockdowns, resembling a state of martial law, have meant unspeakable suffering for ordinary people: lost wages, lost jobs, poverty, mental illness, lack of food and medicine. The tragic fire in Urumqi which killed at least 10 Uighurs was the spark for the mass revolt of 26-27 November. Ordinary Han and Uighur people showed unity to fight the dictatorship, despite years of racist and nationalist propaganda to divide the working class on ethnic lines.

Protesters in Shanghai chanted “Down with the CCP” and “Xi Jinping, step down”. Such open criticism has not been heard for decades. The mass protests have gone beyond protesting Zero Covid and correctly now link this to political demands for democratic rights, freedom of speech, the end of dictatorship.

The CCP has responded with its familiar weapons. Police are on the streets everywhere. Protesters from November have received phone calls and house visits from public security officials to warn them to stop their activity. The dictatorship has announced its highest “emergency level” of censorship. The death of Jiang Zemin is being filtered by the censors to prevent students and workers using this as a pretext for a new wave of protests against Xi’s dictatorship. It is too soon to judge if this repression will block the movement. If so, it will not work forever. The anger is too deep. The call for freedom that flooded the streets and campuses cannot be bottled away by police terror.

The regime has also – as many times before – announced some apparent policy changes to try to defuse the protests. It will relax some Zero Covid measures, it says. It will not call these “concessions” to mass pressure because it fears that would encourage more protests. But the relaxation measures are only superficial and limited. The CCP has trapped itself as well as the people in a Zero Covid Hell because it has failed to invest in public healthcare and good quality vaccines. And the dictator Xi is too identified with the “victorious” Zero Covid policy, so that to genuinely change policy would be a personal humiliation undermining his hold on power.

We are the socialists. We are International Socialist Alternative (ISA) and chinaworker.info. Our ‘Socialist’ magazine is popular among leftist youth in China. We fight for full and immediate democratic rights: freedom of speech, freedom of the press, close down the censors, freedom of assembly, the right to strike, the right to organize. We call for the protest wave to escalate with worker and student strikes.

We say the capitalist CCP dictatorship cannot self-reform, cannot be checked or controlled by using the ‘constitution’; the dictatorship must go and be replaced by a democratic workers’ and oppressed people’s government. We want real socialism, with democratic control over the economy by ordinary people and workers. Not the brutal sweatshop capitalism and police state of the pseudo-Communist Party.

We socialists were also active in the Hong Kong mass struggle. That movement was defeated and Hong Kong was thrown into a dark night of repression because the movement was not organized and did not have a clear political program to go forward. The young activists and supporters thought that spontaneous protests and social media networking was enough – it wasn’t. A successful struggle needs organization, strong workers’ unions, and a revolutionary party.

This leaflet shows you how to order a subscription to our Socialist magazine with analysis and a program for the mass struggle. Contact us. Whether you are overseas or in China, in Hong Kong or Taiwan. We stand for international struggle by the workers’ movement against capitalism, nationalism and oppression. We stand for democracy, feminism and socialism!