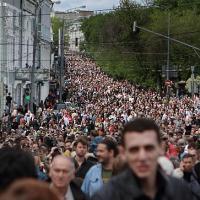 Nearly three months after the event, Russian police are continuing to arrest protesters who took part in a massive opposition demonstration of 6 May. The demonstration ended in clashes and the development of the ‘Occupy Abai’ movement. Provocations by the riot police led to a sit down protest by the marchers. Since that date there have been constant provocations against those political and show business figures who have placed themselves at the head of the movement. But now 16 protesters have been arrested. They face charges that could see them getting sentences of several years in prison.

The latest arrests took place yesterday when Nikolai Kavkazskii, a member of ‘Left Socialist Action’ and an anarchist, Aleksei Polikhovich, returned home to find the police waiting to search their flats. Initially taken in for questioning as “witnesses”, they have now been charged. We understand that Nikolai will be detained for 2 months and faces charges with a sentence of 3 years imprisonment.

Following news of these new arrests, the Russian human rights’ organization, ‘Memorial’, immediately added their names to the rapidly growing list of political prisoners in Russia. The Putin regime is reacting to the growing opposition to its rule with repression and attempts to intimidate activists. Earlier this week, a Moscow court took the decision to hold in jail the members of a punk band, ‘Pussy Riot’, for another 6 months. Today there has been another protest in central Moscow demanding the release of all those arrested. The next major demonstration is planned for mid-September.

The Russian CWI is actively campaigning for the dropping of the charges against all those arrested following the 6 May, and of course the immediate release of Pussy Riot. We ask all those opposed to the growing authoritarianism in Russia to add their voice to the protests by sending protests to the Russian embassy in your country, to demand the immediate release and dropping of charges against Nikolai Kavkazskii, Pussy Riot and all those arrested in connection with the 6 May demonstration.