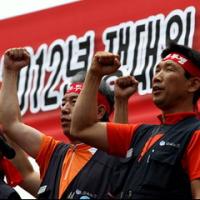 Workers of Hyundai Motors are part of a union called the Korean Metal Workers Union. The KMWU is affiliated to the 700,000 strong Korean Confederation of Trade Unions (KCTU) which has played an important role in workers’ struggles since its formation in 1995. (The other trade union confederation is more moderate and known as the Federation of Korean Trade Unions (FKTU).)

Unfortunately, there is a division between regular and non-regular workers. Only regular workers have the right to communicate with the company about working conditions. However, regular workers fear that if they support non-regular workers, their wages will decrease. The average wage of workers could be lowered to maintain the profit margin that Hyundai Motors has been enjoying. The leaders of the permanent workers do not want a struggle because they think that if temporary workers become regular, there will be less regular jobs or less jobs overall from layoffs.

However, Hyundai Motors has been making tremendous profits in recent years, and their owner, Chung Mong Koo, is as wealthy as ever with a net worth of US$ 6.2 billion. Therefore, if both regular and non-regular workers cooperate in a mass strike, they can force this multinational corporation to raise the wages of all non-regular workers without lowering the wage of any regular worker, as well as force them to keep all workers’ jobs.

These abuses have caused another strike to break out last week with about 400 workers taking action in Ulsan. They are demanding that all non-regular workers to be put on a permanent payroll, wages to be raised, and night shifts to be eliminated. Hyundai Motors has decided to force workers to work from late at night until morning because electricity is cheaper at night in South Korea.

On August 24, about 500 to 600 people consisting of union workers, various leftists, and students participated in a solidarity action to support the strike of the Hyundai automobile workers. They arrived at the factory around 4 pm to pass out leaflets to regular workers leaving work to persuade them to join their co-workers in struggle. The activists stayed outside of the factory the whole night to pass out leaflets to the night-shift workers coming out of work at 8 o’clock the next morning.

The response to the solidarity leaflets varied but was mostly positive. Most of the non-union members that were working during the strike took a flyer, and some spoke words of encouragement and support. A few workers ran out of the exit refusing to take a flyer.

Throughout the night, the campaigners sang solidarity songs, told stories of encouragement, and even performed choreographed dance routines to songs of revolution to make the solidarity action more enjoyable. “Struggle is hard work, but it should be enjoyable as well,” an activist said. There was a notable song called the Strike Song in which activists sang, “Divided, we will die. Shaken, we will die. As one, we will go forward until our day of victory.” Workers expressed their wish “to live like a human being” and talked about the need for a revolution.

The only way to solve this problem is collective action. A mass strike of their workers with the rest of the country in solidarity can bring down the cruel beast that is Hyundai. A big step in getting closer to giving workers the rights that they deserve would be the nationalisation of the corporation, which should be under the democratic management and control of workers’ organisations. Only through mass struggle to overthrow capitalism and replace it with a democratic socialist society can non-regular workers and the unemployed make living wages with decent hours and “live like a human being.”