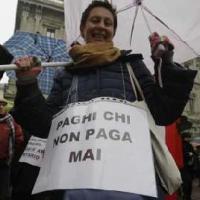 2012 has marked a turning point in the level of the economic, social and political crisis in Italy. After Greece, Italy is one of the hardest hit countries in the eurozone. The IMF estimates a contraction of 2.2% of GDP for 2012.

The unemployment rate has reached its highest level since 2001, and 1 out of 3 young people are officially unemployed. During the first three months of this year, 150,000 companies closed – the equivalent of 1,600 closing every day.

According to the National Institute for Statistics, 8.3 million residents (12% of the population) live under the poverty line, and 5% of Italians live in absolute poverty.

Meanwhile, the government has voted for the Fiscal Compact and a new ‘Spending Review’. The introduction of these two measures will mean an immediate drastic reduction of public health funds, and the sacking of 130,000 public sector workers. Already 35% of young people are out of work and dependent on their families for survival.

Now that balancing the budget is written into the Constitution, with the goal of reducing the public debt (123.8% of GDP) by 5% per year, this will mean that from now until 2023 the various governments will seek to impose cuts of around 45 billion euros a year.

These factual data are the best indication of the depth of the crisis, of its strong repercussions for ordinary people, and the abyss into which capitalism is dragging society.

Crisis of the political system 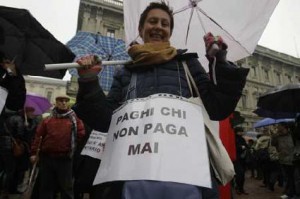 The economic crisis has translated itself into the crude language of a political crisis. In fact, we can say that the entire system has been shaken by earthquakes. The ruling class now faces strong turmoil within its ranks. Not a single institution has been spared from this crisis. The bosses’ union, the Catholic church and even the National Football Federation have been weakened by corruption scandals, bribes and division.

At the recent National Congress of the bosses’ union (Confindustria), they elected a president with a majority of only 11 votes. It was the first time in the history of this institution that a president has been elected with such a thin majoriity. These divisions are an expression of the tensions that exist in the ruling class, particularly within the ranks of the industrialists.

Under these circumstances, it would be correct to state that their only strength lies in the actual weakness of the workers’ organisations and particularly their political leadership.

The technical government, lead by the banker, Mario Monti, and composed of some of the ‘finest strategists’ of the Italian capitalist class, is isolated in society and supported by less then one Italian out of three. A mere 4% have confidence in political parties!

All the major political parties from the Northen League to the right-wing PDL (Berlusconi’s party) and the Democratic Party (PD) are facing a strong reduction in their support; one half of the population did not take part in the recent local elections.

The Northen Leaugue, which for many years has stressed its popular character in opposition to the corrupt élites of the Roman salons, is shaken by corruption scandals. These involve the purchase of a degree for ex-leader Bossi’s son and using electoral expenses to buy diamonds and properties in Tanzania.

Faced with anger from its rank and file, the League’s leadership has chosen to cast aside its historic leader and to elect as National Secretary Roberto Maroni, who was minister of the interior in the Berlusconi government.

The PDL, which until a few months ago boasted of being the first party in Italy and claimed to have one million members, suffered a very severe defeat in the local elections, losing hundreds of mayors and coming third or even fourth in some cities, often with less than 10% of the vote. 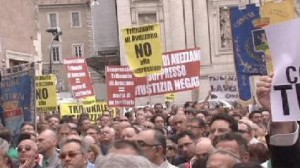 The possible return of Berlusconi onto the political scene is the last desperate and grotesque attempt of a captain to save his sinking ship.

The Democratic Party has itself lost tens of thousands of votes, some in what for decades were considered PD strongholds, although its support has held up better than that of the PDL.

Beppe Grillo and the 5 Star Movement

The main new factor in the political situation is represented by the astonishing and unprecedented success of the 5 Star Movement, led by the billionaire comedian Beppe Grillo. The 5 Star Movement is not a political party, nor an alliance, nor a social movement as we would consider it. It was built in and around the internet, around a website and very general political points related to the rejection of both right-wing and left-wing policies. Beppe Grillo’s movement has no real membership, no structures, no branches and no elected leadership.

Grillo has built his authority by proclaiming his movement’s difference with the corrupt political elite, with the ’old ways’ of doing politics of the traditional politicians.

He has built his forces on the ruins of the traditional left, including the political and organisational collapse of the Party for Communist Refoundation (PRC). By using a radical rhetoric he has been able to attract a new layer in society to his movement – young people generally coming from a left background, but also people from the right, including from the Northern League.

His movement is credited with 20% in the polls. This result would make the 5 Star Movement the second political party in Italy. They have already had hundreds of councillors elected and have the mayor in several cities, including a relatively big city like Parma.

Beppe Grillo’s success must be read as an expression of the rejection of traditional parties and of the huge opportunities that exist for an opposition and alternative force in society. It is based on a sentiment of distrust and disgust towards traditional policies rather than a proper enthusiasm for his movement. Grillo’s success is extremely volatile ; it would be more correct to talk about support against the others rather than support for him. 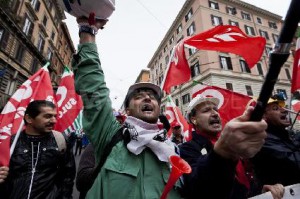 The 5 Star Movement could win more support in the next period, but the inability to respond with a clear programme to the needs of ordinary people, linked to the absence of a real social base in society, could mean that the astonishing growth soon turns into decline. At that time, thousands of activists of the movement will come out disappointed, discouraged and looking for a political solution. The Left and the labor movement will have to propose a solution to many young people and workers who have been temporarily seduced by the ’anti-system’ rhetoric of Grillo.

ALBA, the No Debt Committee and the struggle for a new workers’ party

As demonstrated by the rise of ’Grillismo’, we live in an extraordinary situation, a time of very clear acceleration of social and historical processes, a time characterised by the rapid composition and decomposition of the entire political framework.

Seldom before has the need for a new political entity been so strongly felt; a weapon in the hands of those who want to fight and resist the frontal attacks from the ruling class on working class people’s rights and living conditions. 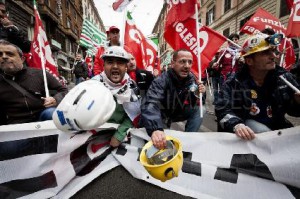 Today a discussion has opened up on this issue ; it can no longer be avoided or postponed. The attempt of the leadership of the metal-workers’ union, FIOM, to send an ’ultimatum’ to the political parties demonstrates the willingness of certain industrial activists to find a channel of expression, a megaphone to be used to organise struggle and with which to rally those who want to organise themselves against the system.

On 1 October last year one thousand activists, union leaders, and workers in struggle responded positively to the appeal made by former president of FIOM, Giorgio Cremaschi, and some sections of the unions of the base (USB) for the idea of constructing an organisation for struggle and discussion around a political programme against the crisis.

The political ’manifesto’ that was approved at the founding assembly of the ‘No Debt Committee’ revolved around the need to reject the noose of public debt and to argue for the nationalisation of the banking and financial sector under democratic and popular control as a means of making those responsible pay for the crisis of capitalism.

In recent months, the feeling of discouragement and resignation, the general frustration about the political situation, the calling of a general strike – first postponed then abandoned – by the CGIL union federation, related to the inability to translate into concrete policy proposals the correct demand of non-payment of the debt, and finally the opportunism with which components such as Sinistra Critica (USFI) and Falcemartello (IMT) have ’worked’ in the Committee, have brought the process of building, strengthening and consolidating the No Debt Committee and its territorial components to a halt.

It is not excluded that, with the intensification of the euro and debt crisis, the Committee can manage to overcome its crisis, although this does not seem to be the most likely perspective.

In parallel to these developments, a new discussion has opened up around a proposal launched by the political left-wing newspaper ’Il Manifesto’. It is known as ALBA – an alliance of Labour with campaigns to protect public property and the environment. ALBA held a first national meeting in Florence which was attended by activists from social movements, union leaders and ordinary citizens. The political programme of ALBA has yet to be defined but appears, for the moment, very confused. Nevertheless, we cannot rule out that this initiative could attract support from those disillusioned with traditional politics and searching for a new ’political home’. 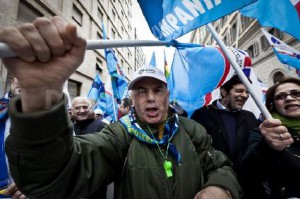 The success of the 5 Star Movement shows the potential that exists and also that a political gap cannot last for a long period of time. There can be enormous possibilities and opportunities but in the absence of a genuine left alternative, other forces including on the right can occupy the space left vacant by the collapse of the left.

In the period ahead, Controcorrente will continue to work in the unions, campaigning for a fighting leadership and promoting the demand for a 24 hour general strike as a first step against the Monti government and its attacks. At the same time we will continue to co-operate with the No Debt Committee and to follow the development of ALBA, while remaining open to any new initiative that might arise, for example around the FIOM.