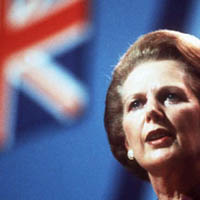 Thatcher, revered as a heroine by capitalist ideologues, and recently hailed as an “outstanding” leader by Chinese state-run media, appeared a rather helpless and out-of-touch figure in her dealings with the Chinese dictatorship in the 1980s, which paved the way for the 1997 handover. The Global Times in an editorial claimed Thatcher  “made her biggest compromise as prime minister in this issue” – referring to Hong Kong.

This is not historically correct as Thatcher, confounding her ‘iron lady’ image, in fact made several big u-turns when faced with determined resistance from organized labour. This was the case in the city of Liverpool, where the labour movement was led by the Trotskyist Militant group (part of the CWI to which Socialist Action is allied) and where mass struggle including the threat of a general strike forced Thatcher to retreat and increase funding for public housing and local services.

In Britain’s dealings with Deng Xiaoping and the CCP dictatorship, Thatcher’s ‘compromise’ meant being forced to accept what her top officials told her from the very start – to abandon unrealistic ideas about perpetuating British colonial rule after the 1997 cut-off point. These officials, including Hong Kong’s then governor who had taken soundings from Beijing, told her in no uncertain terms that Beijing’s position of reclaiming Hong Kong was ‘non negotiable’.

Pumped up by her victory over Argentina in the Falklands War, Thatcher went to Beijing to meet Deng in September 1982. In his biography of Deng, Ezra Vogel notes that, “Thatcher later described the session as abrasive, but British officials who attended the session testify that Thatcher’s reports of a confrontation with Deng were greatly exaggerated and that a sense of confrontation derived only from her press presentations after the meeting and the Chinese reaction.” [Deng Xiaoping and the Transformation of China]

The “confrontation with Deng”, according to Vogel’s sources, was therefore mostly a media ploy to cover the British government’s submission.

Within a week of Thatcher’s Beijing visit the Hong Kong stock market (Hang Seng index) had fallen 25 percent, and within a month it had slumped by half. The economic uncertainty of this period saw the Hong Kong currency collapse, which led to the desperate 1983 decision to peg it to the US dollar. So much for the ‘smooth’ transition!

Clearly, Britain as a fading imperialist power was unable, regardless of the wishes of Thatcher or any other leader, to stand up to the Chinese state once its leaders had decided on reclaiming Hong Kong. This itself marked a shift of emphasis for the Chinese regime: Mao Zedong had long been content to defer the issue of Hong Kong’s status to “future generations”. But as Beijing set about dismantling state industries, free schooling and healthcare, low cost housing etc. and therefore could no longer misuse the name of ‘socialism’ to justify its rule, its need of nationalistic rhetoric and the vision of restoring China’s greatness increased. Hence the importance of reclaiming Hong Kong.

“The British blinked first,” says Christine Loh in her book Underground Front – The Chinese Communist Party in Hong Kong. “After all, there was long-term Sino-British relations to consider,” meaning that British capitalism did not want to jeopardise its access to the vast Chinese ‘market’ which was then opening up for the sake of Hong Kong, which it could not hold at any rate.

The plight of Hong Kong’s masses, and whether they would face state repression under Chinese rule (as they had on many occasions under the British), was not a real concern for Thatcher. In 1981, one year before negotiations began with China, Thatcher pushed through the racist ‘British Nationality Act’ which robbed three million Hong Kong people (and millions in other former British colonies) of the right of abode in Britain. Thatcher was at that time making speeches about Britain being “swamped by an alien culture”. Closing the door to a possible mass exodus of Hong Kong Chinese triggered by the handover was a major aim of Thatcher’s tighter immigration laws.

Rather than an adversarial relationship, Thatcher, Deng, and their respective ruling elites, reached an understanding based on economic interests. Thatcher would go on to describe Deng’s one-country-two-systems maxim as “ingenious”. It is not surprising to socialists, who oppose both Thatcherism and Dengism, that Thatcher’s class warfare stratagems are now being taught to CCP officials. According to The Telegraph newspaper:

“At Shanghai’s China Executive Leadership Academy, one of the country’s most elite Communist Party schools, Thatcher’s philosophy has found its way onto a ‘crisis management’ course that also focuses on the 2011 UK riots.

“[…] Professor Li Min, a lecturer at the institution, said when it came to crisis management Britain’s former prime minister was a model of behaviour.”

Facing an estimated 500 ‘mass incidents’ every day in China, and spending more on police and internal security than even on defence, it is not hard to understand the CCP’s interest in Thatcher’s repressive policies such as strengthened police forces and the most undemocratic anti-union laws in Europe.

Today there are still widespread misunderstandings about Britain and Thatcher’s role in Hong Kong. Perhaps the most extreme expression of this is those misinformed youth who wave the British colonial flag at anti-government demonstrations in Hong Kong and wrongly see this as a symbol of resistance to the Chinese dictatorship. But this political confusion starts at the top, within the political establishment, not least among leading figures in the pan democratic bloc. Democratic Party chairwoman Emily Lau recently commented that Thatcher “didn’t look after the well-being of Hong Kong people,” adding that this, “marked a very, very dishonourable chapter in the history of the British Empire”. One could be forgiven for believing such statements are meant as satire.

Which chapters of Britain’s military invasions and subjugation does Ms Lau see as “honourable”? As The Telegraph pointed out, Britain has at one time or another invaded “all but 22 countries in the world”. The author Richard Gott wrote in the Guardian newspaper, “Many of the present conflicts in the world take place in the former colonial territories that Britain abandoned, exhausted and impoverished…” Gott lists Sri Lanka, Palestine, Sierra Leone, South Africa, Zimbabwe, Kenya, Pakistan and India as examples of states where ethnic conflict and instability fostered by British ‘divide and rule’ tactics continue to this day to exact a deadly toll.

Margaret Thatcher represented the capitalist system and defended it with particular brutality. That she has won many admirers in the CCP establishment is no surprise to genuine socialists, who understand the need to fight capitalism and dictatorship, in the East and in the West.