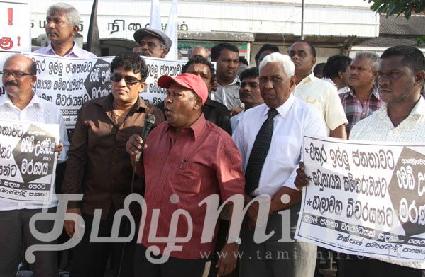 On the evening of 1 August, government troops opened fire on a peaceful protest against the poisoning of water supplies in Waliweriya, 20 miles north of Sri Lanka’s capital, Colombo. Three were killed immediately, dozens were badly injured and three people are fighting for their lives in hospital.

The whole area of Waliweriya remains cordoned off and under military and police control. The United Socialist Party (CWI in Sri Lanka) conducted a poster campaign to condemn the killings and held their placards high at the protests in Colombo against state brutality.

Rajapakse’s is a scared regime, as it goes into elections in the North of the country and in the central tea plantation area. Carried below is a statement made by the USP as the election campaign opened. 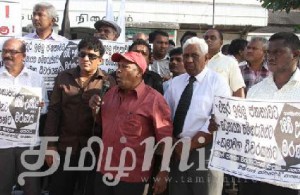 The Mahinda Rajapakse regime, under the orders of the International Monetary Fund and the World Bank, is bent on slashing the living standards of working and down-trodden people and imposing on them more and more burdens. People are being loaded with ever increasing prices of electricity, fuel, transport, milk and all other essential goods. At the same time various shows and festivities are held to entertain Rajapakse and his cohorts.

Waste and corruption among government ministers, and the institutions that come under them, have sky-rocketed. The whole country has been subjected to complete militarisation in order to suppress the people who have dared to fight the oppression and injustices committed by this government. This can be seen from the killings on the evening of 1st August at Rathupaswala, Waliweriya.

Meanwhile, elections for the Central, North Western and Northern Provincial Councils have been declared and are to be held on September 21st this year. It is clear that the Rajapakse regime is not going to accept defeat at any of these elections and will try to win by whatever means necessary. In this situation the United Socialist Party has fielded candidates to several districts in these provinces for the purpose of mobilising people against this murderous government.

It is a victory for the democratic forces in the country to get the government to hold the elections for the Northern Provincial Council which were delayed for more than four years after the end of the war between government forces and the Tamil Tigers. The right of the Tamil people in the north to elect their own provincial council, which the people in the other eight provinces have enjoyed, has been denied unduly by this racist regime. It then tried to impose a provincial council with its powers clipped. However, Rajapakse and the Sinhala-Buddhist racist clique on which he stands have been forced onto the back foot and concede the election to the Northern Provincial Council with powers in tact. This is quite an achievement for the Tamil people.

The United Socialist Party is contesting the Jaffna and Vavuniya districts in the Northern Province and the Nuwara Eliya district in the Central province with a view to building a socialist alternative under the leadership of the working class. Although our immediate aim is to defeat this racist neo-liberal Rajapakse dictatorship, the USP emphasises that it is standing in this election for the victory of a socialist programme and the crushing of capitalist politics. This is the only sustainable way for resolving the Tamil people’s national oppression on the basis of accepting the right to self-determination. 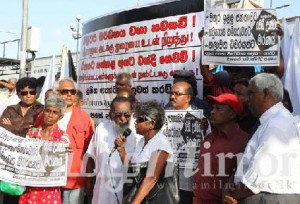 The view of the Tamil National Alliance is that the Tamil national question can be solved with the help of the Indian bourgeois. But this is a myth and will drag the Tamil people into more and more misery. The capitalist Indian government is more concerned with maintaining its regional hegemony. For that purpose, they want to keep this capitalist Rajapakse government in office, as was clearly borne out by the events of the final phase of the civil war.

On the other hand, in the Hill Country, Thondeman of the Ceylon Workers’ Council has betrayed the working people of the plantations. He holds ministerial posts in the Rajapakse government and at the same time he is deceiving the estate workers by tying them to the government on the pretext that, through these people, they can get the assistance of the Indian government.

In this context, the working class movement should struggle and take the initiative to aim for a government of workers and peasants on the basis of a socialist programme in opposition  to all the capitalist forces, including the ruling UPFA and the United National Party. Only the USP is fighting on the basis of a socialist perspective and an anti-capitalist programme. Therefore we call upon all oppressed people in Sinhala, Tamil and Muslim communities to rally round the United Socialist Party.