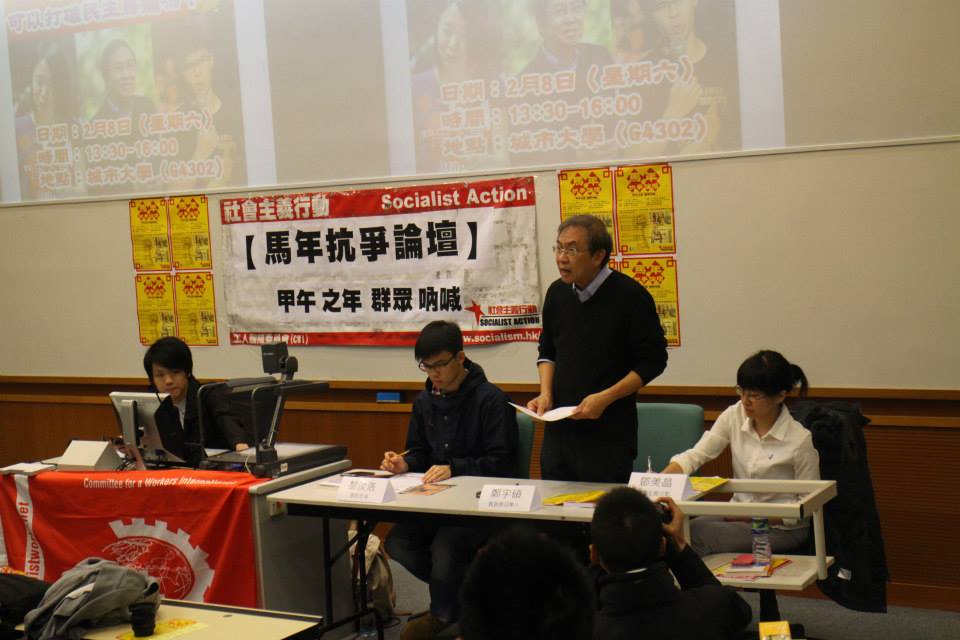 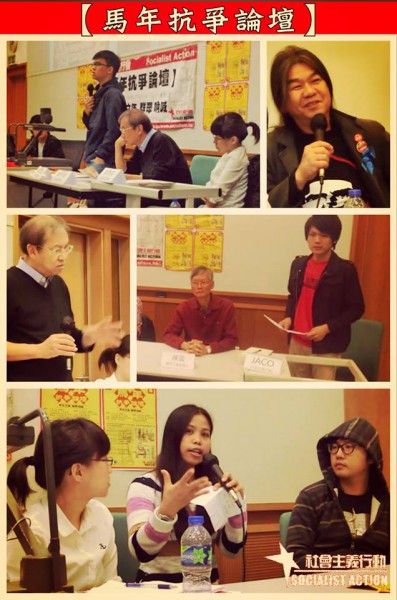 Socialist Action’s first ever ‘Forum of Struggle’ at City University in Kowloon Tong was a clear success with over 60 participants, mostly students and young people, attending various sessions over the weekend of 8-9 February. A range of topics including the most significant socialist election victory in modern US history (Seattle) and the longest strike in Hong Kong for 80 years (dockworkers’ strike 2013) were presented for debate and discussion. “Very informative,” said Paul from Hong Kong. “We’d like to thank you for supporting the domestic workers’ fight for justice,” said Indonesian migrant activist Rendy, who spoke at the session on women’s struggle.

Vincent Kolo of chinaworker.info introduced the discussion on class struggle in Asia, giving examples from Thailand, Cambodia and South Korea. More than 80 percent of Cambodia’s garment workers who recently staged a national two-week strike are women, many starting work at the age of 15 or 16. The strike grew out of brutal conditions in the 800 or so garment factories, many owned by Chinese and Hong Kong capitalists. “There’s been a wave of mass fainting in the factories, sometimes affecting more than 100 workers during a single shift,” Vincent explained. “The causes are malnutrition, exhaustion, and the fumes from chemicals used in the production process.”

Cambodian workers are threatening to resume their strike despite the brutal state crackdown in early January, in which five workers were shot dead, with 23 strike organisers still under arrest. “The workers are demanding an increase to 160 US dollars per month, from the former industry minimum wage of 80 US dollars, and even this would give workers barely enough money to buy enough food to live on,” said Vincent. The authoritarian Cambodian regime of Hun Sen had been rocked by the strike, which fused with mass anti-government protests disputing the rigged 2013 election results. The heavy repression of recent weeks may keep the government in power for the time being, but also means that an even bigger social explosion is likely.

The discussion covered a range of issues from the deepening ‘EM crisis’ as capital flees emerging markets for the ‘safe havens’ of the US and Japan, to the warmongering speeches of US and numerous Asian leaders, such as Japan’s right-wing nationalist prime minister Shinzo Abe, who has drawn parallels with 1914 and today’s military antagonism between Beijing and Tokyo. US imperialism sent 1,000 troops and 50 naval vessels to the Philippines after super-typhoon Haiyan in November, in what one Manila legislator called “disaster opportunism.” Washington is pressing for military bases in the Philippines again, a quarter century after it was forced to withdraw. This is just one move in the geo-political chess game being fought out in Asia between a ‘rebalancing’ US and a rising China.

“Abenomics – the loose money doctrine of Abe – has given huge profits to the big corporations, but not benefited workers in Japan,” explained Pasha of Socialist Action. “Child poverty has reached the level of 15 percent, and there is growing disillusionment with both the main political parties, DJP and LDP.” 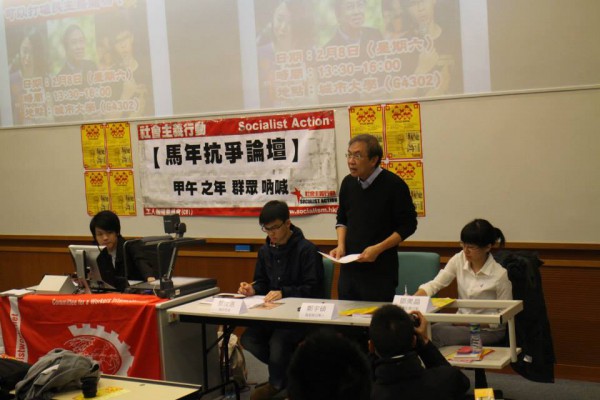 The biggest session of the forum, with over 50 present, was the panel debate on the Hong Kong democracy struggle involving Oscar Lai Man Lok of youth group Scholarism, Professor Joseph Cheng Yu-shek who chairs the pan democratic umbrella group Alliance for True Democracy, and Sally Tang Mei-ching of Socialist Action.

All the speakers agreed on the need to oppose the government’s line of imposing a nomination committee, which will be used to insure only pro-establishment candidates compete in the 2017 elections for Chief Executive. Oscar Lai said Scholarism was pushing for a re-run of the 2010 de facto referendum, discussing with the pan democratic parties in the Legislative Council to stage resignations in order to force a city-wide ‘referendum’. This is not contradictory with Occupy Central (OC), he said, which may begin later this year. He argued it was important to get the Democratic Party involved in the ‘referendum’ tactic (they refused in 2010) because if only the ‘radical’ pan democratic parties take part this would lead to a polarisation of ‘radical’ and ‘moderate’ camps within the pan democratic bloc.

OC leaders have come under growing criticism for their lack of a fighting approach and a clear shift by moderate pan democratic leaders, especially the Democratic Party, towards a compromise with the Chinese regime. This was underlined when Oscar Lai revealed OC leaders had stated under-18s should not participate in the occupation, claiming this would be seen as ‘political brainwashing’! Scholarism opposed this he said.

Joseph Cheng stressed the need for unity against the government and its undemocratic manoeuvres. He expressed the fear that the pan democratic forces are fragmented today and society has become more polarised. Any nomination committee means “the pro-government camp will be the majority,” he said. “We don’t want any kind of discussion about whether it’s possible to democratise the nomination committee – that’s not possible,” he said.

Sally Tang said the struggle should demand the abolition of the nomination committee, and also make clear that the Basic Law (mini-constitution) was an undemocratic document drawn up by the representatives of the Chinese dictatorship and Hong Kong’s business elite. The Basic Law has become the main debating tool of the regime, to veto opposition to a nomination committee that decides who can run in the election. It was “naïve” of the moderate pan democrats to believe they can reach a compromise with the dictatorship, she said, and called for a strike by students and workers to become the main focus alongside mobilising for Occupy Central. 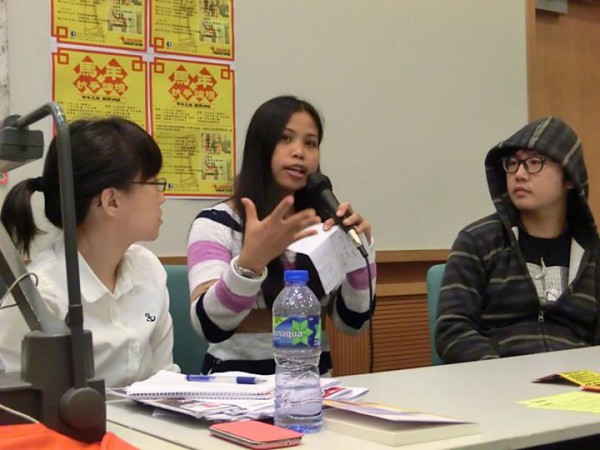 Rendy from the Indonesian Migrant Workers’ Union outlined the background to recent mass protests in Hong Kong following the revelations of imprisonment and torture of 23-year-old domestic worker Erwiana from Java. Groups representing domestic workers in the city are demanding legal changes especially to relax the so-called ‘two-week rule’, which deters domestic workers from breaking a work contract because a stay of just 14 days in Hong Kong is allowed without a new contract (and jobs in branches other than domestic work are banned under Hong Kong’s migrant employment rules). The blood-sucking hiring agencies that charge around seven months’ salary are another target of the protests.

LSD legislator ‘Longhair’ Leung Kwok-hung quoted Marx and Engels, “Workers of the world unite,” to summarise the approach of socialists to the situation faced by migrant domestic workers. “We cannot support those who say stop the import of migrant labour,” he said. “Our slogan should be for better pay and conditions.”

More people came into this discussion than any other, reflecting the fact that this is the most immediate of struggles in Hong Kong right now. Azan, a barrister, said the existence of a separate – lower – minimum wage for migrant domestic workers, outside the statutory minimum wage that applies to all other workers was clearly discriminatory. Other speakers showed that a form of ‘apartheid’ operates in Hong Kong, with Indonesian and Filipino domestic workers preferred by the government, as against mainland Chinese, because it is easier to socially exclude the former and prevent them winning stronger protection and economic bargaining power. The government’s refusal to allow domestic workers to live apart from their employers is another pillar of this discriminatory regime. Dan, from City University, pointed to the upcoming APEC finance ministers’ meeting in Hong Kong, in September, which was an ideal opportunity to organise mass protests in support of migrant workers’ rights and other social issues.

A separate report on chinaworker.info will cover the discussion on the United States, addressed via video link-up by Ty Moore, Socialist Alternative’s candidate in Minneapolis city council elections in November 2013.