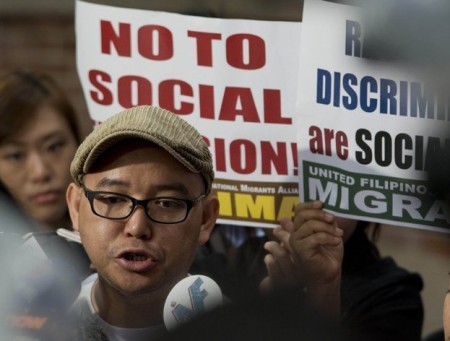 “Domestic workers in Hong Kong see Erwiana as an epitome of themselves,” says Eman Villanueva, a veteran campaigner for migrant workers’ rights who is also the Vice-Chair of the Filipino Migrant Workers’ Union in the city. “She was a victim of violence for a long time, but now she’s declared she’s going to fight. This makes her a role model for many migrant domestic workers.”

On the day I meet Eman for this interview, the press reports visiting Indonesian government officials announcing a plan to send skilled labour to Hong Kong in coming years – drivers, construction workers and nurses – to fill a labour shortage (although more accurately this is to meet the Hong Kong bosses’ quest for cheaper labour). The team from Jakarta were officially in Hong Kong to discuss the effects of the case involving 23-year-old Erwiana Sulistyaningsih, who left Hong Kong in January after months of systemic physical abuse and starvation by her employer. Eman calls the timing of the Indonesian government offer “brazen” – meeting with Hong Kong officials ostensibly to show their “concern” for Indonesian domestic workers but using the opportunity as a sales pitch to open up a new labour market. For poorer countries like Indonesia and Philippines the export of migrant labour is actively promoted by government as a way to boost the country’s balance of payments through workers’ remittances to their families.

Thousands of migrant women workers have taken to the streets in the first weeks of 2014, to demand justice for Erwiana, still at the time of writing in hospital due to the horrific injuries she suffered, and to widen this issue into a campaign for the rights of all migrant workers. These demonstrations and the wider debate in society about the super-exploitation of migrant workers represents an important change in the situation in Hong Kong.

“There is so much emotion involved in this case. A lot of migrants, even the unorganised workers, have responded to the protests. This means the situation is conducive to organising.”

“This is a good time to organise and to educate migrant workers, including education as to why there is such a thing as forced labour,” says Eman. “This case has brought out the issue of slavery. In my 22 years in Hong Kong I have never before heard this, of the term modern-day slavery being used so widely. We’ve said this for a long time. But now it’s become recognised in society and by media commentators. Even CY Leung [Hong Kong’s unelected ruler] has been forced to comment on the case and to say that violence is unacceptable.”

“We know that Erwiana is not an isolated case. Just last year the case of Kartika Puspitasari surfaced [Kartika’s ex-employers were sentenced to several years in prison for physical abuse]. These cases are a major embarrassment for the Hong Kong government and a blow to it’s international image.”

An issue that stands to the fore among Hong Kong’s 300,000-plus migrant domestic workers is the role of the private recruitment agencies that impose massive fees in return for signing off on job contracts. The agency fees swallow several months of a workers’ salary and they are widely blamed for other malpractices. These poorly regulated companies are a key component in what is today a lucrative human trafficking business.

Both the Indonesian government and the Philippines government operate policies that favour the agencies and give them a powerful hold over the migrant workers whose contacts they process.

“If a worker complains too much to the agency about her conditions of work, they’ll refuse to help, then you’re trapped,” says Eman. “By law an agency can only charge a fee of ten percent of the first month’s salary, around HK$401. But in reality the agencies charge much more, up to HK$25,000 (3,200 US dollars). For migrants this means working for the first six to seven months almost without pay. It’s akin to indentured labour.”

The indentured labour system practiced by British and French colonialism was a form of debt bondage, whereby poor people, sometimes entire families, were bound to an employer (normally a plantation owner) for a fixed number of years to perform unpaid labour in return for the cost of their passage to the colonies.

“In 2006, the Philippines government abolished the old ‘placement fee’ charged by the agencies and replaced it with ‘mandatory training’, although it works in the same way. These charges generate 100s of millions of dollars for the agencies.”

Another burning issue raised by the Erwiana affair is the demand of migrant workers for a live-out option, to replace today’s compulsory requirement for domestic workers to stay with their employers. Eman agrees that, rather than mainly an economic question, the Hong Kong government’s insistence upon the live-in rule represents a form of social control over migrants – to limit their social interaction.

“We want flexibility. Some domestic workers prefer to live with an employer, others would rather live out. This is also an unfair rule for Hong Kong families, many living in very small apartments. And the government has tightened up their controls on this. They took a more flexible approach before 2003, when live-out was allowed. Now the rule is enforced more strictly, they even conduct raids!”

The three main demands of the current protest movement among migrants are to make live-out an option, to end the two-week rule (forcing migrants to quickly exit Hong Kong if their contract is terminated) and to impose tougher regulation over the agencies including to punish those that overcharge or commit other offences.

Eman says education is now a key focus of the migrant organisations’ activities. He believes there will be a new upturn in protests when Erwiana returns to Hong Kong for the trial of her former boss, perhaps later this year.

The mass protests of 2014 mark a new phase of struggle on the part of these workers, who account for almost ten percent of Hong Kong’s labour force. The need to build their organisations, above all fighting trade unions that link up with other sections of the working class, has never been clearer.